For those of you who are not familiar with Chow Vegan, this talented vegan blogger and home cook delivers memorable flavors in the form of home-style veganized Chinese dishes and comfort foods featuring locally sourced produce as often as possible. If that doesn’t have your mouth watering yet, just take a look at a few of my favorite recipes from her site – Sticky Rice in Lotus Leaf, Spicy Pumpkin Wonton Soup, and Roasted Tofu with Leeks and Black Bean Sauce.

The name ‘Chow Vegan’ is derived from her love of crispy Cantonese-style chow mein, ooh miam! Given our mutual interests and love for comfort foods and veganized Asian cuisines, it’s fitting that Chow Vegan has joined us here on Vegan Miam to share one of her dishes featuring an essential Asian kitchen appliance – the rice cooker! Yes, the rice cooker, so let’s continue reading and see what Chow Vegan has for us today… 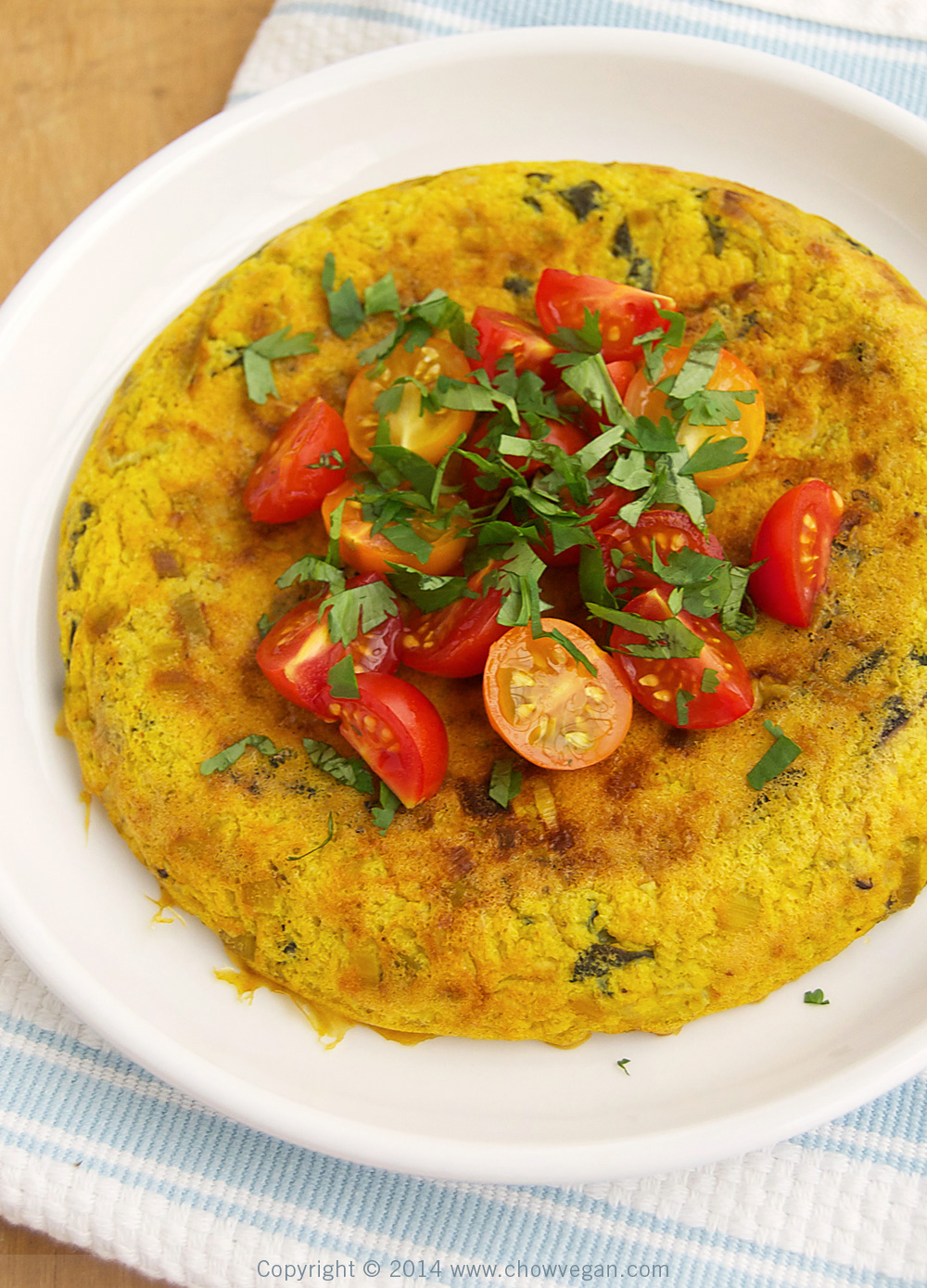 I’m delighted to be guest blogging on Vegan Miam today. Thank you so much Rika + Doni for having me over! I brought over a nice little frittata to share. Since vegan miam centers quite a bit on Asian cuisine, I thought it only appropriate to make the frittata in that quintessential Asian kitchen appliance, the fuzzy logic rice cooker. 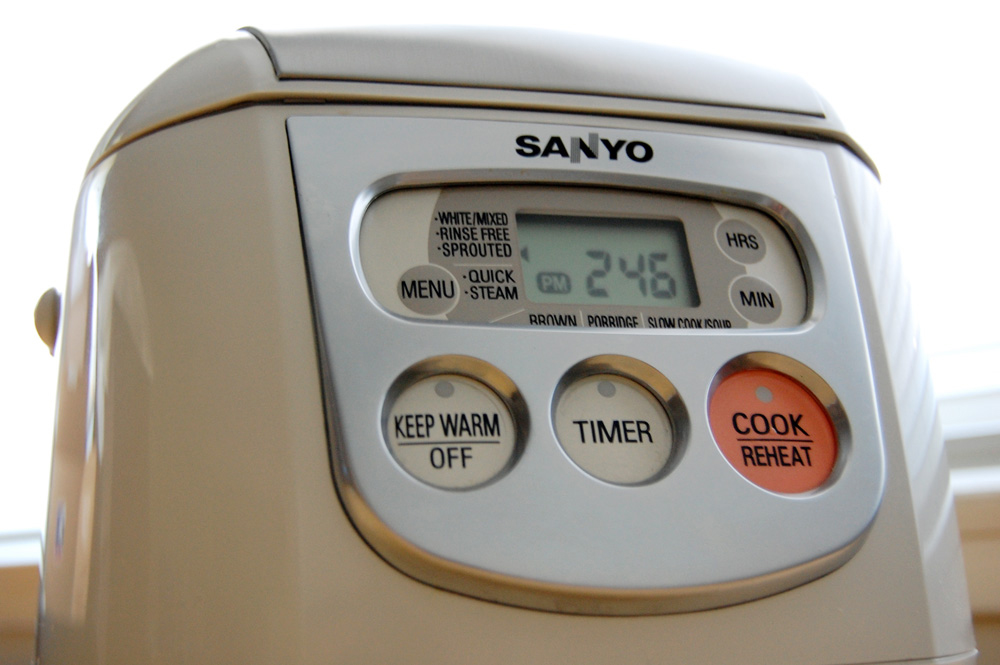 My best friend in the whole kitchen. Doesn’t he look handsome? He’s a real charmer, a little fuzzy though. What’s up with that? He’s a little slow too, maybe it’s the fuzziness? He takes 40 minutes to cook white rice, an hour and a half for brown. It’s alright if you’re not in a hurry or if you plan ahead. After all, once you start the rice cooker, you don’t have to pay any attention to it. 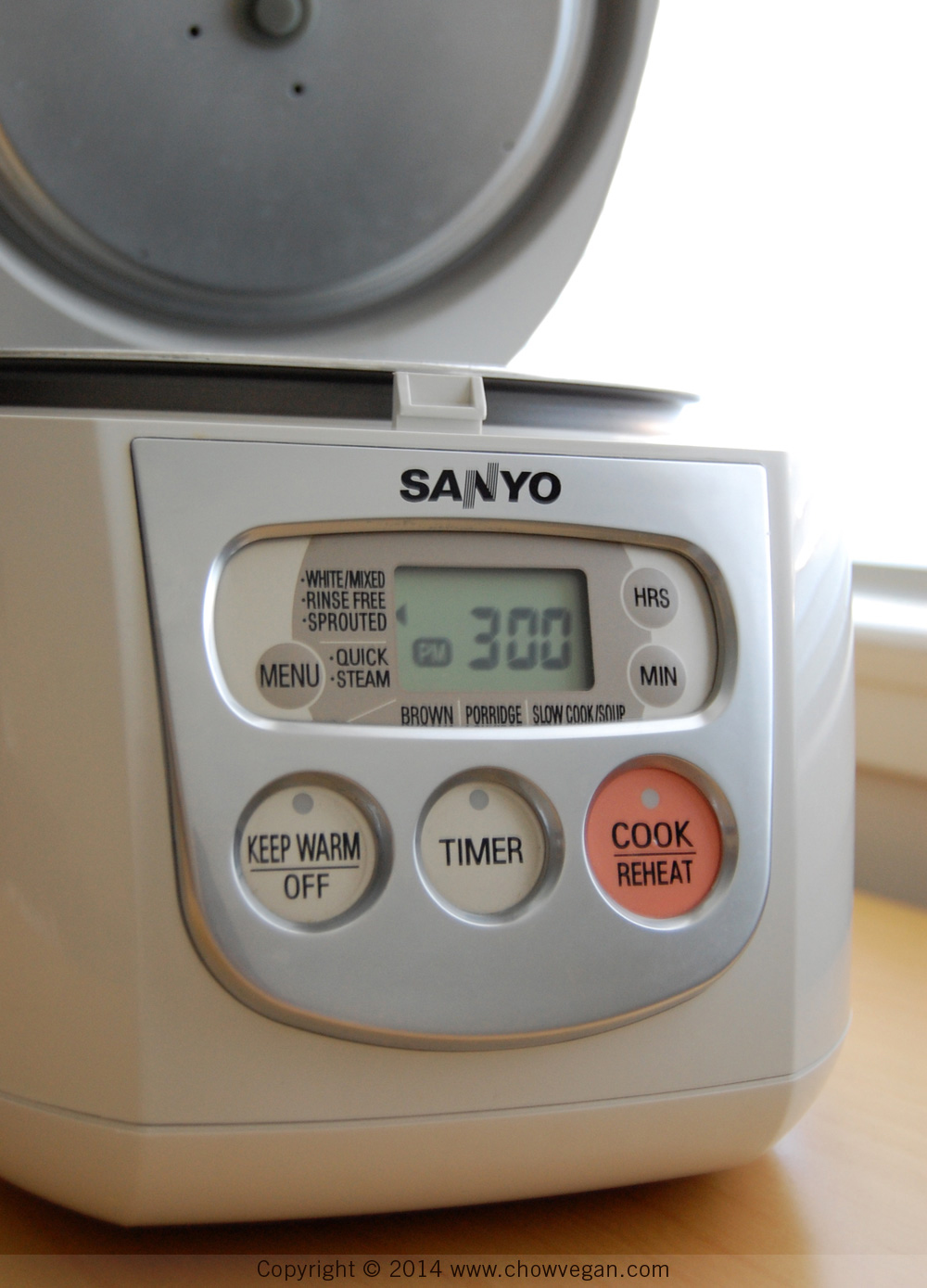 I usually plan ahead by sautéing the veggies for the frittata the day before. So in the morning, it’s just a matter of putting together the batter and dumping it into the rice cooker. Of course, no amount of planning helps if you forget to actually push the large, salmon-colored “cook” button to start it.

After sitting around instead of cooking for 40 minutes, the batter had come to room temperature. I figured it was still okay and hit the start button. Twenty minutes later, the rice cooker beeps that it’s all done. I was worried that it beeped so soon but the frittata was totally fine. See? Fuzzy but smart. 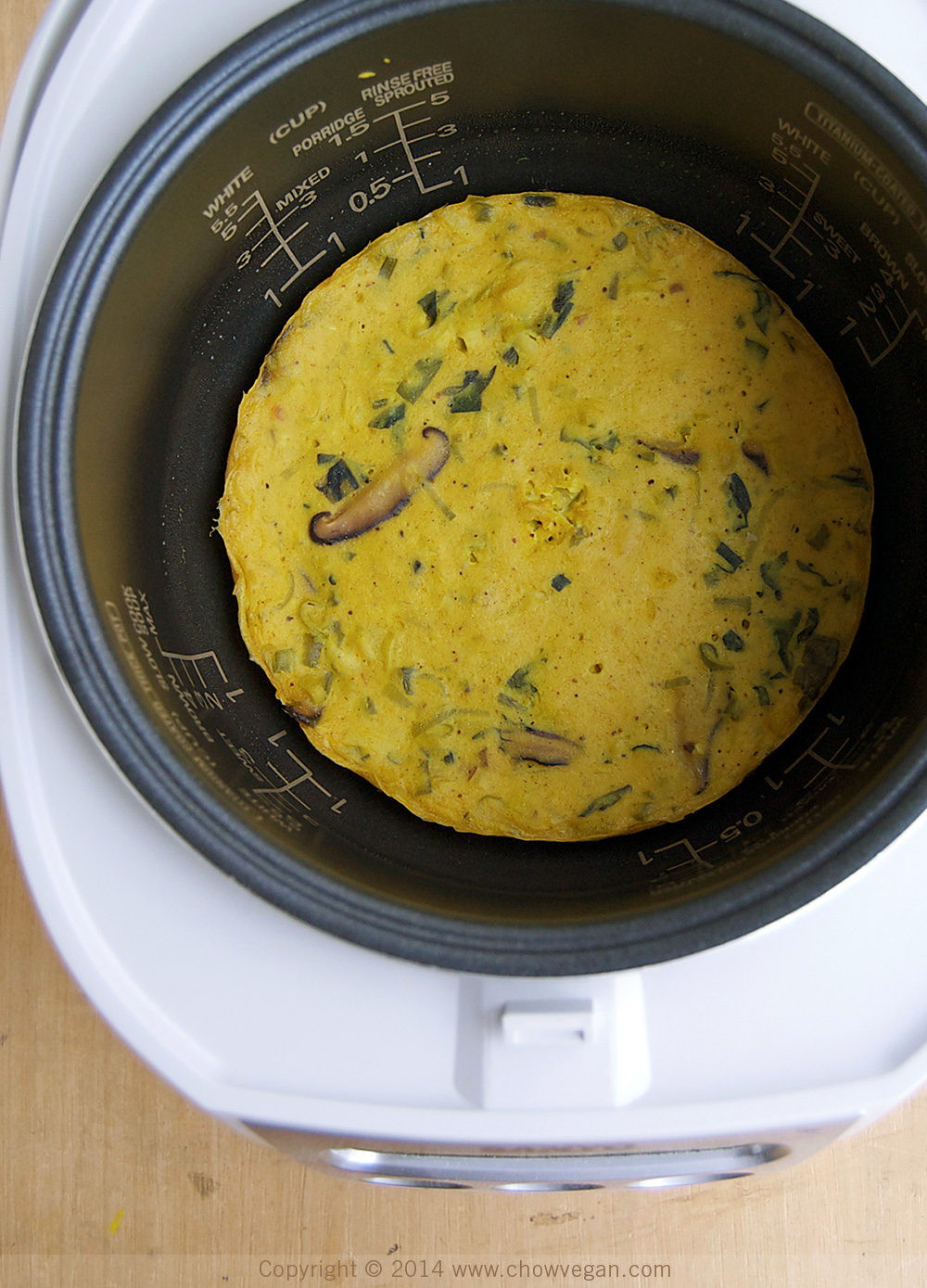 Because of the size of my rice cooker (5.5 cup), the frittata is only big enough for one or two people, about 6.5 inch in diameter and about a half inch thick. I’ve tried making it thicker but the center doesn’t cook all the way through.

I have yet to try the ‘Warm and Fuzzy Logic Rice Cooker Vegan Frittata’ recipe in a larger 10 cup rice cooker. But as it is, it’s great if you’re not feeding a crowd or if you don’t want to turn on the oven (though it doesn’t get quite as browned and crusty as when cooked in a skillet). And with the titanium-coated, non-stick inner pot, it practically cleans itself.

Yield: Serves two or one if you're super hungry

Cooking directions is for use with a rice cooker with a 5.5 cups capacity.

Heat a wok or skillet until hot, lightly drizzle with a bit of oil and sauté the mushrooms, garlic and leeks until translucent, season with salt to taste while cooking. Transfer to a dish and set aside.

Clean and dry the wok, heat until hot, add a bit of oil and sauté whatever greens you're using, set aside until cool enough to handle, then coarsely chop. If using spinach, squeeze out any water before chopping.

In a food processor, combine the tofu, nutritional yeast, turmeric, nutmeg, black salt, chickpea flour, baking powder and non-dairy milk, process until smooth. Transfer to a large bowl, add the vegetables, and mix well. Lightly oil the inner pot of the rice cooker and dump in the mixture. Shake the pot a bit to even out the batter, making it level all around.

Close the lid and press cook on the regular rice setting. Depending on the rice cooker, it should be done in about 40 minutes or so, insert a toothpick into the center to check for doneness. Open the lid and let cool before sliding the frittata out of the inner pot.

To serve, cut into slices and top with sliced tomatoes and cilantro as desired. 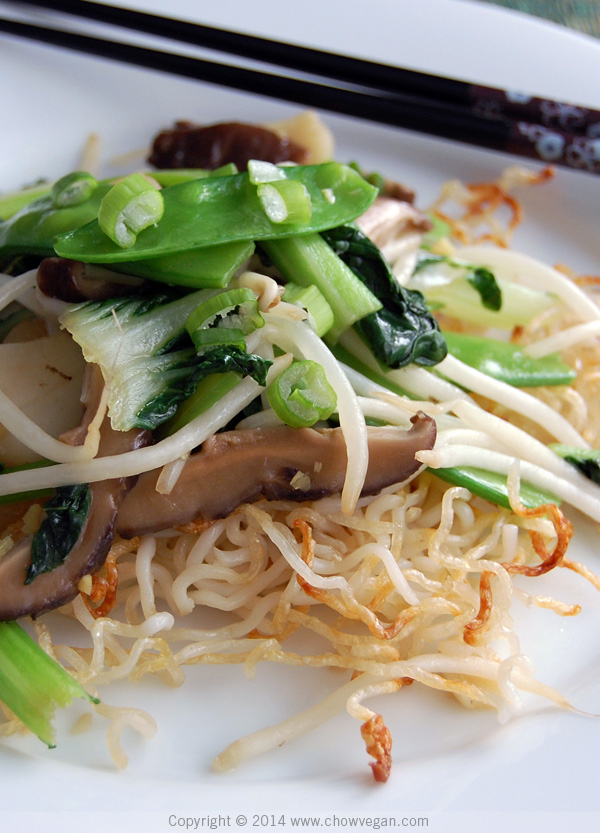 Founded in 2008 by a native Californian descended from a family of Chinese-American restaurateurs and a long-time vegetable connoisseur, Chow Vegan features an eclectic mix of veganized home-style Chinese dishes, food reviews, simple cooking with local produce and an occasional mash-up thrown in for good measure.

Have you ever made a vegan frittata before? What is your favorite frittata recipe?