I enjoy a good sturdy cookbook in the kitchen, but more often I find myself using my iPad for recipes now. I frequently transcribe recipes from physical cookbooks onto my iPad and like fluidity of being able to alter, adjust and edit as I cook using Evernote. Occasionally I’ll even pick up a cookbook app like the one I’m sharing today – Elegantly Vegan.

Elegantly Vegan was created by a dear friend of mine, Swedish recipe developer Veronica Sternberg. This interactive vegan cookbook app for iPads and iPhones was designed and developed by Gothenburg-based designer Nicklas Gottrup and Turning Point FTW. The Swedish design firm Turning Point FTW has produced several other cookbook apps for iPads and iPhones. Photography for Elegantly Vegan was provided by one of Sweden’s top food photographers – Sonja Dahlgren. 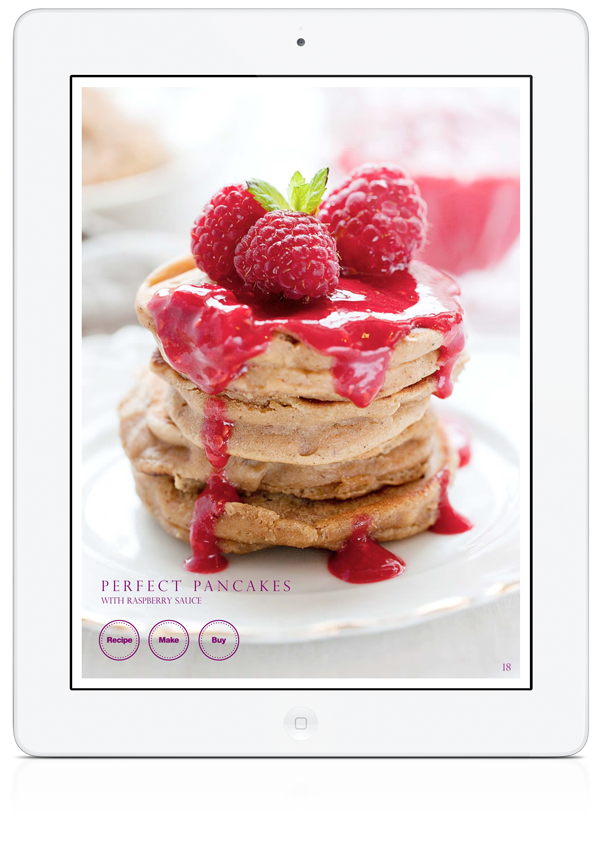 Elegantly Vegan app is currently available in Swedish and English, with three different metric systems: US (cups), UK (imperial/ml) and Swedish (dl). It is available to download in the App Store for both iPad and iPhone (download here). The app features more than 50 delicious vegan recipes, which are divided by meal type: breakfast, Sunday brunch, soups, salads, mains, comfort food, afternoon tea and coffee time treats. 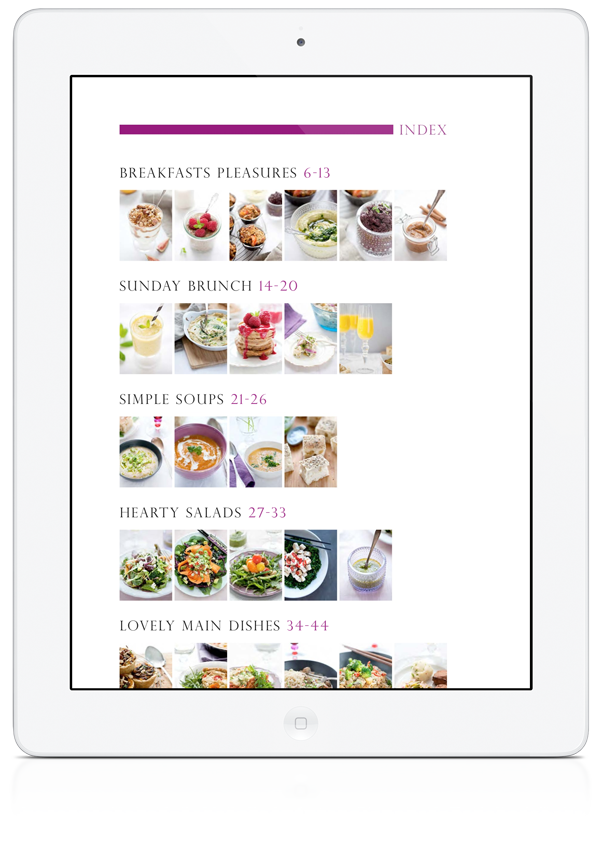 There is a voice activated step-by-step module meaning you don’t have to touch your iPad in the kitchen while cooking; all you have to do is say ‘back’ and ‘next.’ Another special feature is an easy serving calculator, a very helpful tool that can portion your recipes to a desired serving size (it changes the measurements & serving size for you automatically). The app even has the option to prepare a grocery list that can be emailed to yourself or the person doing shopping for you. 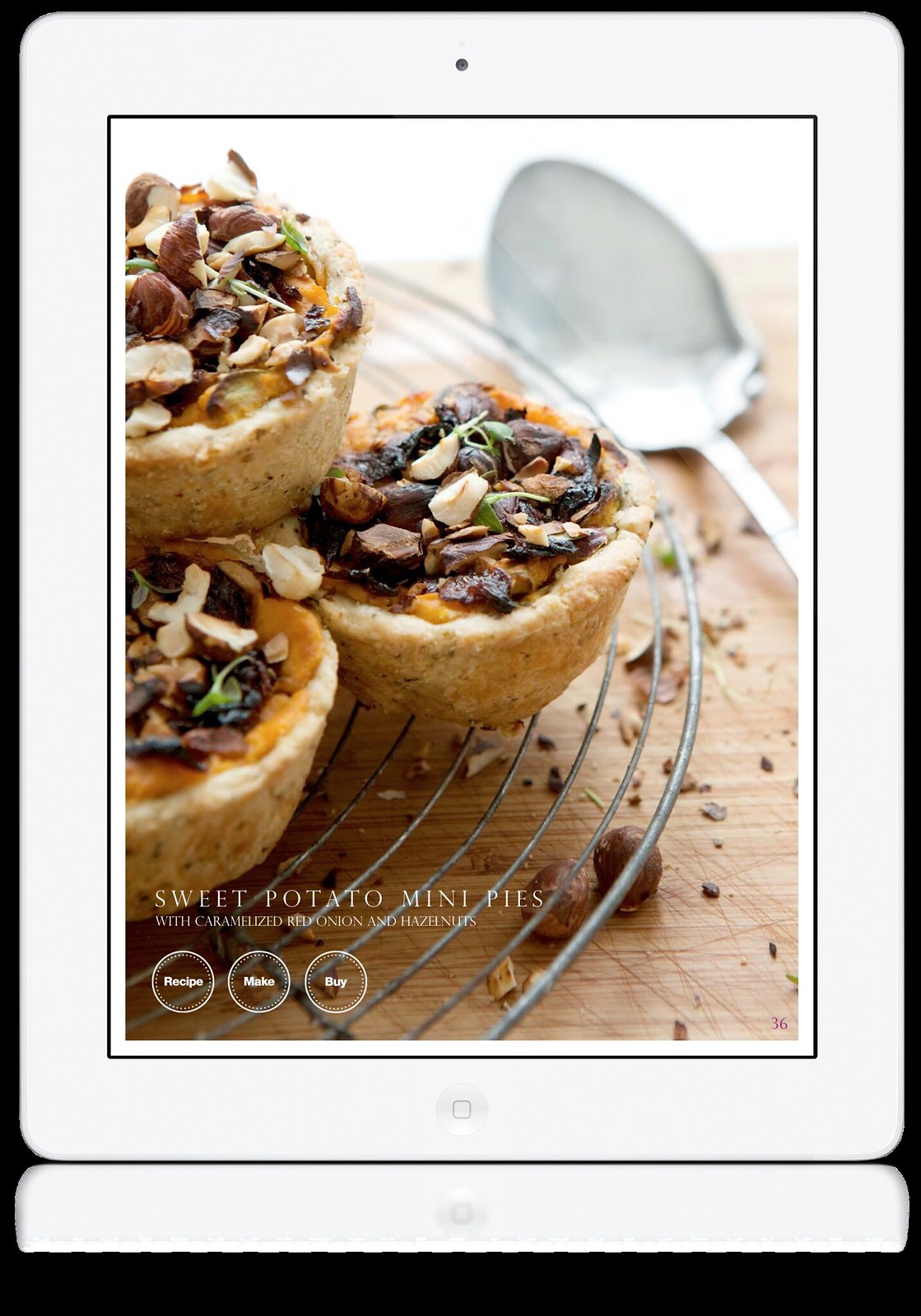 I honestly struggled to find faults in this app because it seems to do everything for me! I just love how usable and practical it is and wish more cookbook apps were designed as well as Elegantly Vegan. There are a few small subjects I feel I should comment on though.

I recently asked Veronica about the inclusion of honey in her recipes; to help give the readers further insight into her personal views on the use of honey, here is her response (*honey alternatives are always offered in her recipes as well):

I feel sad and afraid for the bees. I love them and I want to do my part to preserve them. At the moment that consist of planting flowers on my balcony which they like and buying honey from local, organic, producers. I only buy this type of honey from bee keepers that take care of their bees. I never ever buy nasty mass farmed, evil honey because that process is not in harmony with nature and the bees.

I understand that people may judge me for this. I respect that. However, the reason I buy honey from local bee lovers and keepers is that I want to support their work with keeping and growing the bee population. I see that as way for me to contribute towards the bee’s preservation. Just as me planting flowers.

I also offer an alternative to honey in my cookbook, a recipe for ‘date syrup’ in my book which I use when I can’t get hold of the honey I know is guaranteed to be cruelty free and that the money I pay for it goes towards saving the bees. 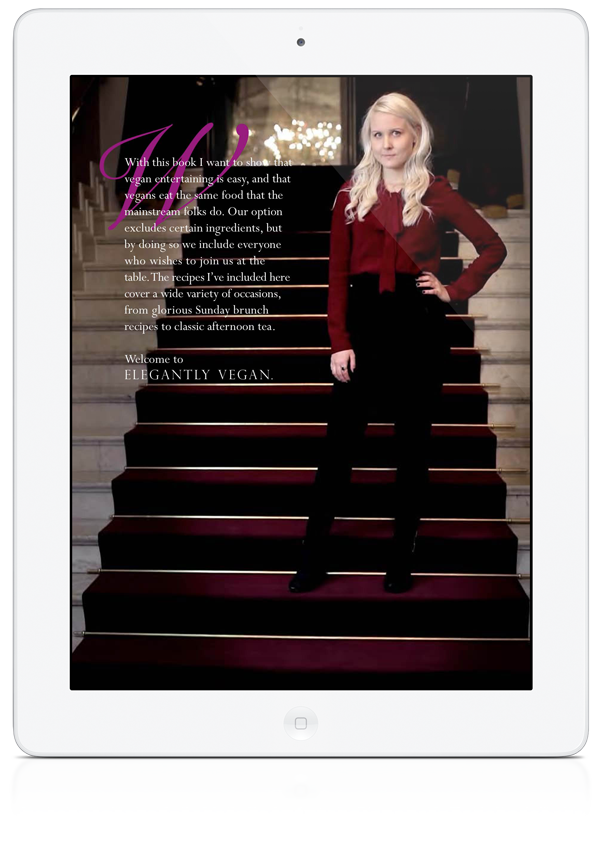 Since I’ve been back from my last trip I sampled a few recipes from Elegantly Vegan and I was impressed with how easy these recipes were to follow and prepare. So far I have tried: Pumpkin Seed Pesto, Pasta with Pumpkin Seed Pesto, Cauliflower Soup with Herbs and Swedish Cinnamon Buns. 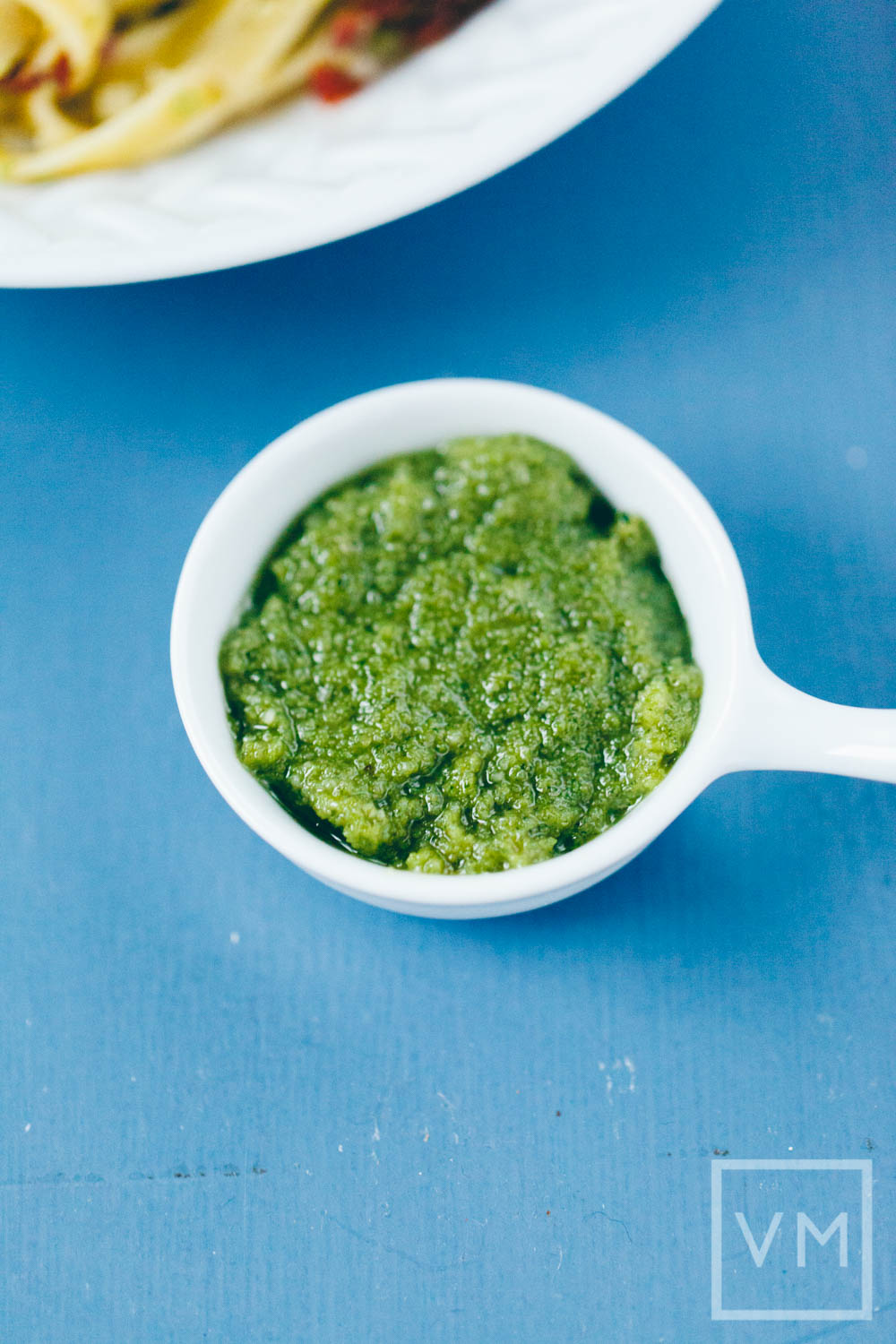 I’ve made my share of pestos using whatever nuts are handy, affordable or required. But I have never tried making pesto with pumpkin seeds. I guess I just never thought of it, but then pumpkin seeds aren’t something we keep in our kitchen too often. We’ve clearly been missing out! This was my first time making a Pumpkin Seed Pesto, and all thanks to Veronica’s recipe.

The Pumpkin Seed Pesto is faintly sweeter than other pestos, hearty, earthy and really versatile. The final product was nice, it was thick enough that it made a lovely tapenade and a perfect panini or sandwich spread

Tip: There were no measurements for salt, I recommend adding a bit more salt and olive oil for a creamier and savory pesto. The only small issue I had with the recipe was the ‘1 pot’ measurement for fresh basil since sizes of herb pots vary. I read that somewhere raw pumpkin seeds should be soaked before blending, maybe this will help make the pesto smoother, but we enjoyed the way ours turned out closer to a tapenade. 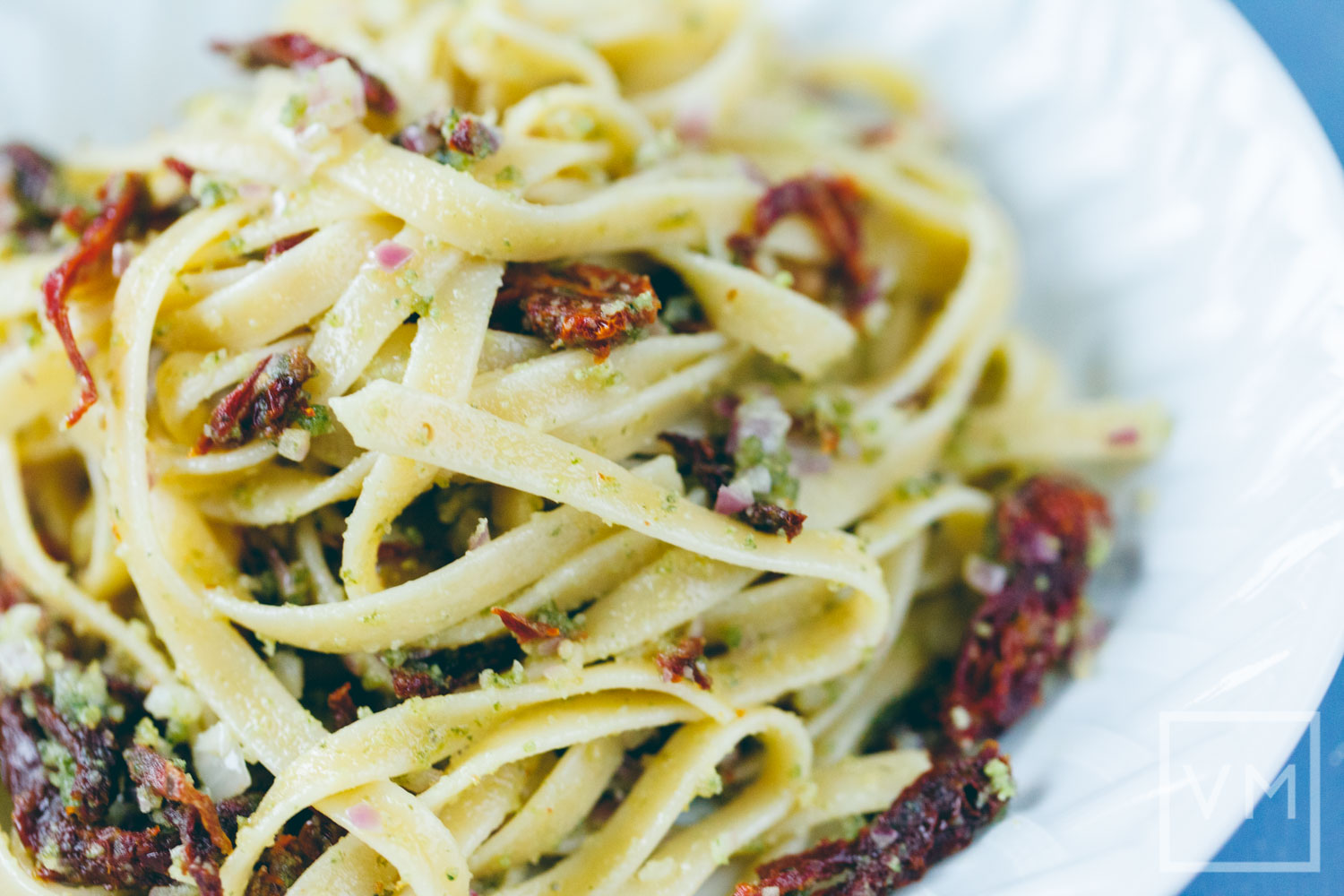 I used the serving calculator for this recipe and tried one serving. The result was the perfect portion size for me. I like the combination of sun-dried tomatoes, red onion and pumpkin seed pesto in a pasta dish, the flavors balanced out well.

Tip: I would like to see a suggested amount of pasta to use per serving. I used 3.5-ounces of fettuccine, which was perfect for 1 serving. I noticed there was no link to ‘Pumpkin Seed Pesto’ on the recipe, and as I mentioned earlier I would like to see live links within recipes to other recipes that are referenced or needed. I think this would make the app a little more intuitive. 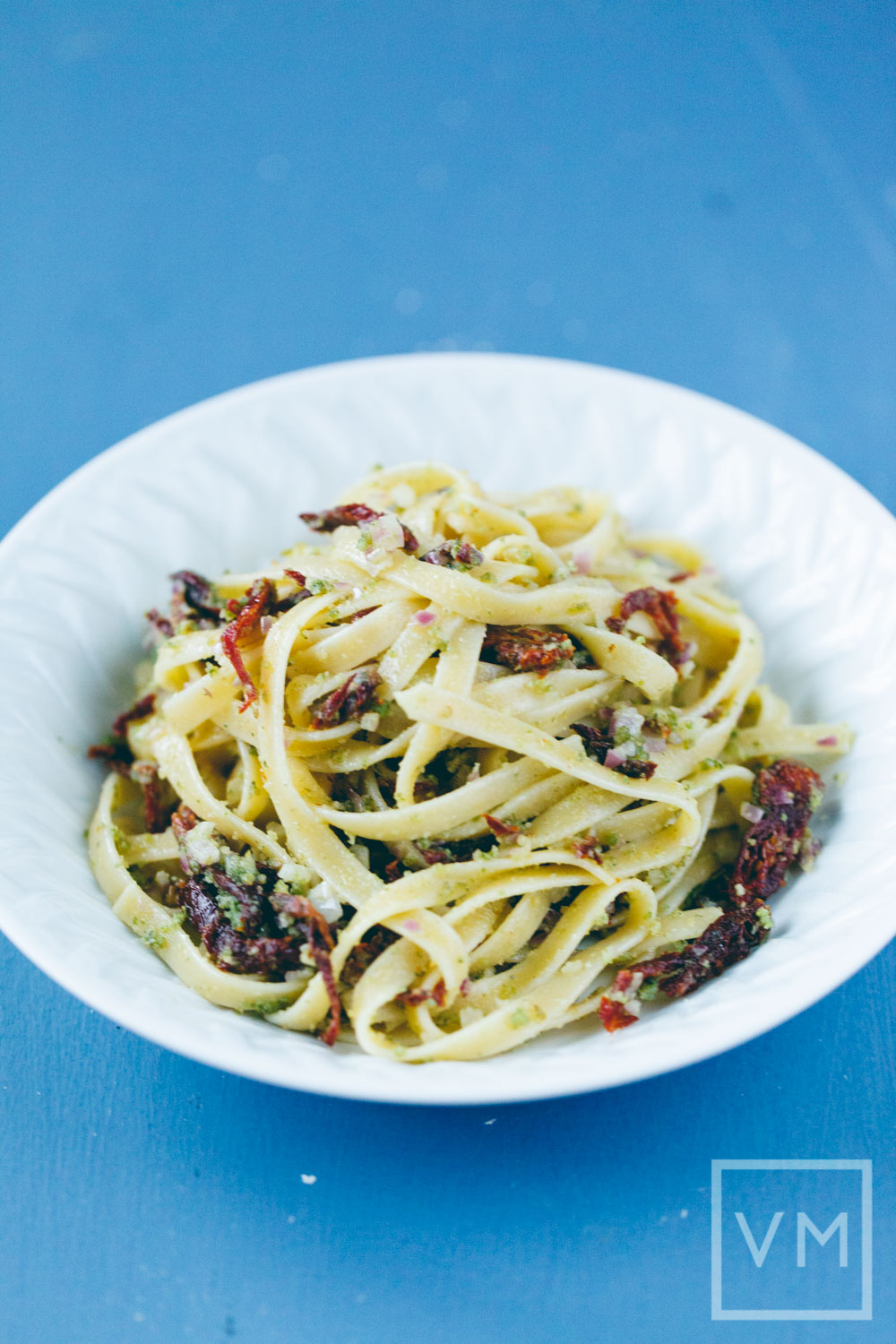 The Pasta with Pumpkin Seed Pesto recipe is available at Elegantly Vegan app. 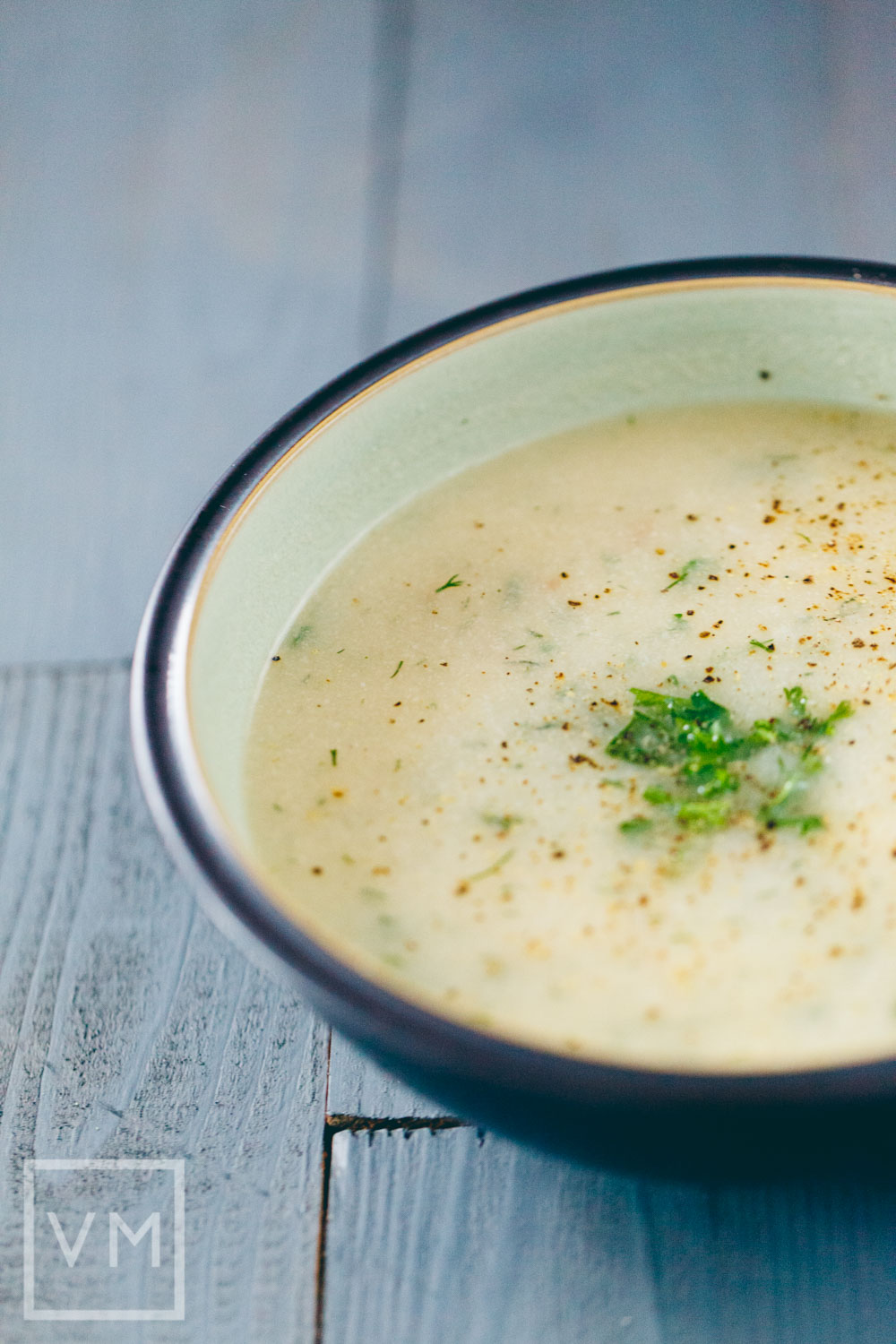 This is my favorite ‘one-pot’ dish from Elegantly Vegan. It’s like a reinvigorated creamed cauliflower soup with the aromatic herbs and a slight lemon tang. This is your quintessential Scandinavian soup, with the flavors and aroma of fresh dill instantly transporting you to Sweden. This was an easy recipe for a hearty and flavor packed creamy soup with layers of clean, fresh flavors. This is a clear favorite of mine, especially this time of year as the temperatures begin to drop and I start to seek out a bit more comfort food. I sprinkled truffle salt in the end and if you have some, I would recommend using it.

Tip: Her recipes are pretty simple to follow, but occasionally need to be more detailed. The soup has no water measurement. For 2 servings, I used 4 cups (32 oz) of water to boil my cauliflower and leeks. The resulting soup was thin. This approximation worked out well for me because I like thin soups, but I think some people would prefer a thicker and creamier soup. I took an educated guess and it worked out well, but a few more details would help make the recipe easier.

I noticed the recipe called for ‘vegetable stock cube’, I wish there were more precise measurements since stock cube concentration varies. For example, when I asked Veronica about this, she said half of a stock cube is about 5 dl of stock (approx. 2 cups). My stock cubes are smaller – half of my stock cube is just 1 cup . It’s difficult with prepared product inconsistencies, so additional measurement details would be useful. 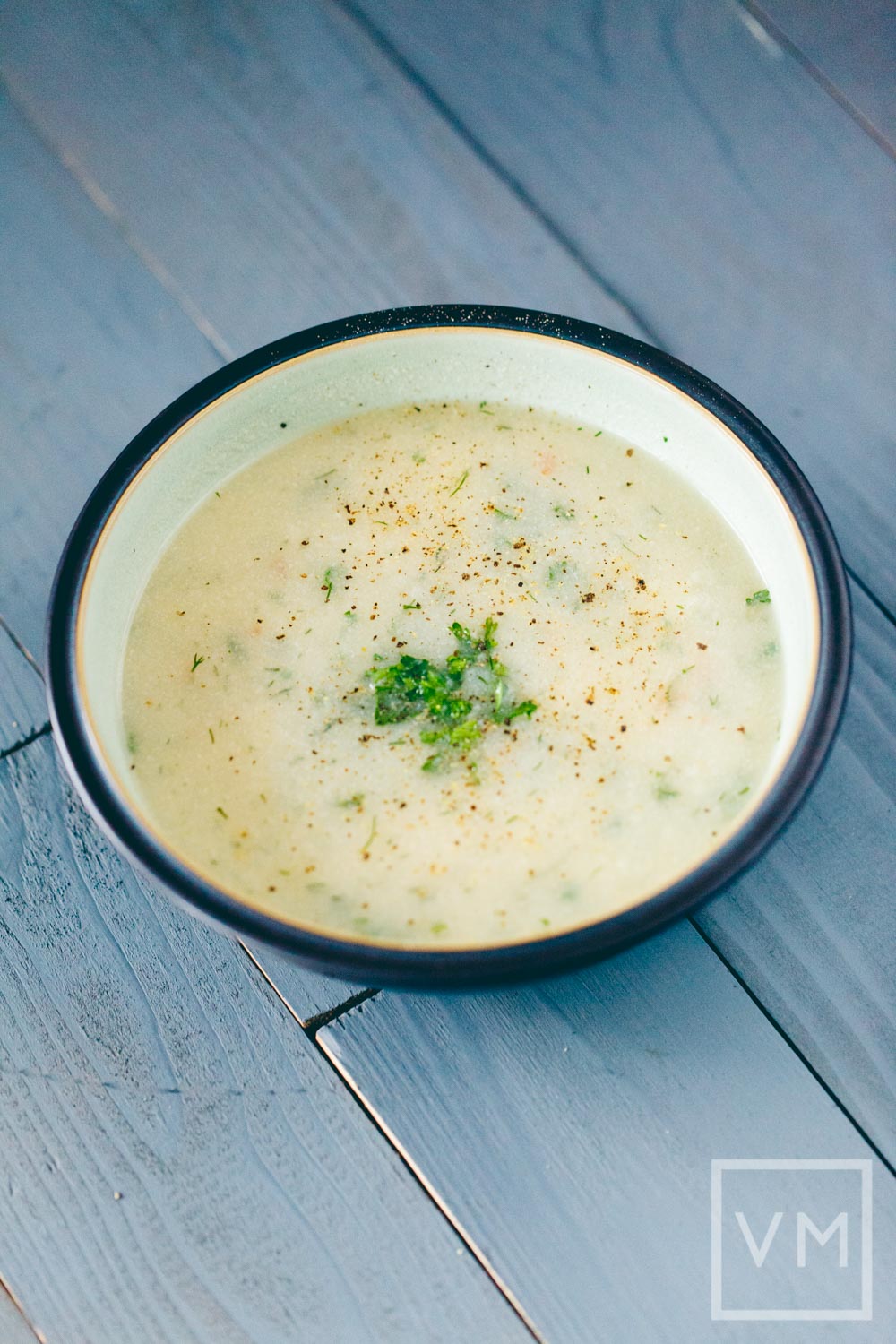 The Cauliflower Soup with Herbs recipe is available at Elegantly Vegan app. 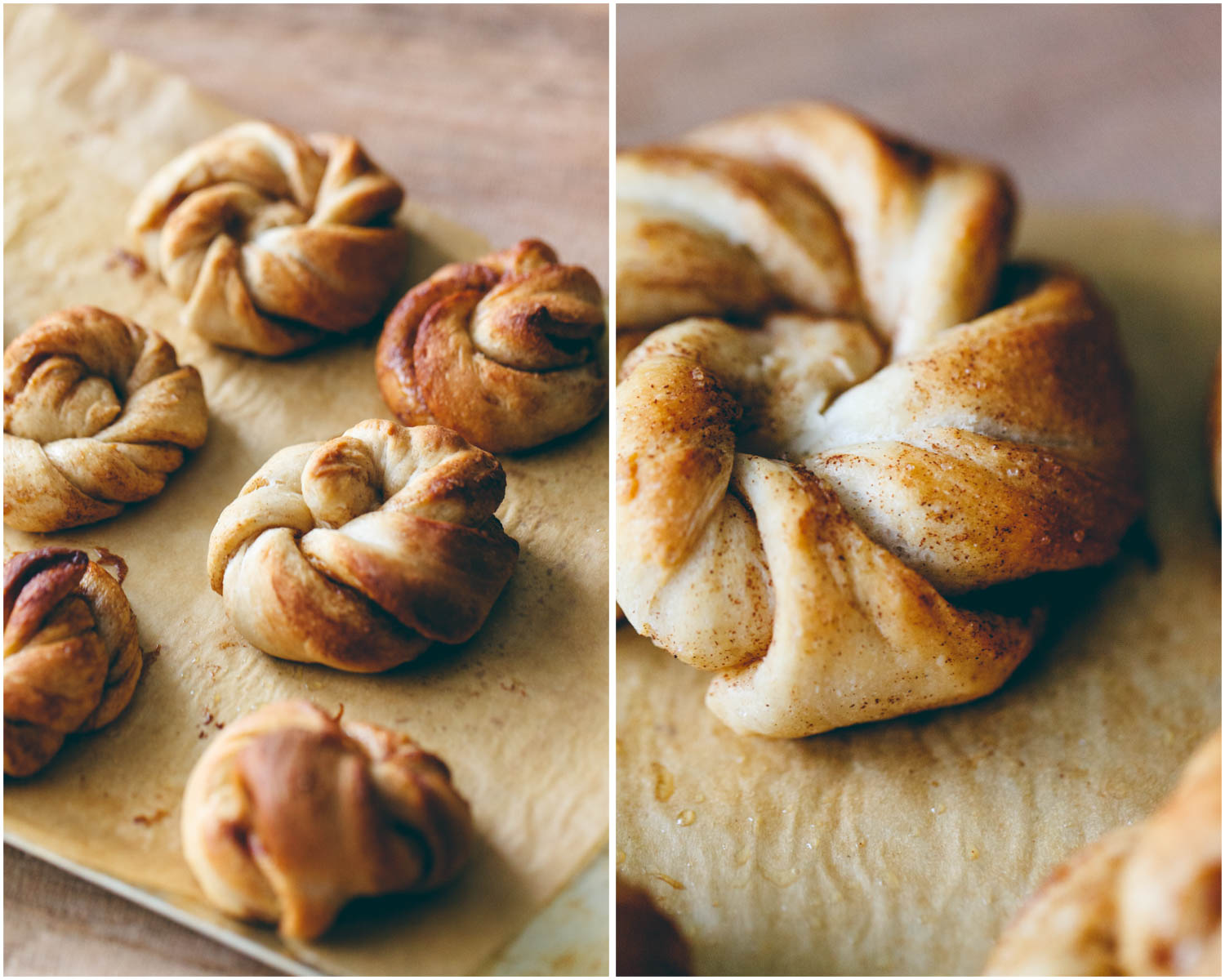 This is one of the most iconic Swedish dishes, you can’t go anywhere in Sweden without seeing some pearl-sugar sprinkled cinnamon buns. Swedish Cinnamon Buns aren’t your ordinary cinnamon roll though, they are actually slightly different and more flavorsome.

My filling was a bit thinner than I think it should have been due to a ‘light’ margarine I was using, so my filling crystalized a bit on the bottom of the buns. The dough turned out perfectly though, the dough was light and slightly fluffy and proofed very well. The final product had a nice soft interior with a nice crusty exterior.

I could use a bit a practice tying my knots though, I can’t say I have that much experience working with doughs yet. Fortunately the dough and the filling were delicious, so I envision plenty of practice tying these knots and getting these cinnamon buns perfected.

Veronica is hosting a worldwide giveaway here at Vegan Miam and she will be sending a copy of her Elegantly Vegan cookbook app to 5 lucky international readers. The winner will need an iPad/iPhone to be able to use the app.

Use the Gleam widget below to enter for a chance to win her app.

If no widget appears, try refreshing the page or use this direct link. You can come back everyday for a bonus entry or re-share a tweet. The closing date is 11:59PM 13th November 2014 (Pacific Time).

Disclosure: The app was kindly provided to us for review. All reviews are our own personal opinions, we have not been compensated to provide any feedback positive or otherwise.