Vegan Breakfast at The Waldorf Astoria Chicago: Disappointment and Redemption

In February we stayed at The Waldorf Astoria Chicago for three nights. Instead of talking at length about the overall hotel experience, I am going to detail our vegan dining experience at the hotel, specifically breakfast at the hotel restaurant Balsan.

A good chef was hindered by bad management and as a result we started off with a disappointing and frustrating breakfast. Ultimately, once control was in the hands of the chef, she was able to produce some fine dishes in an attempt to redeem the hotel. Yet, despite her success, we cannot recommend The Waldorf Astoria Chicago to vegans because the management is far too inept to rely on. 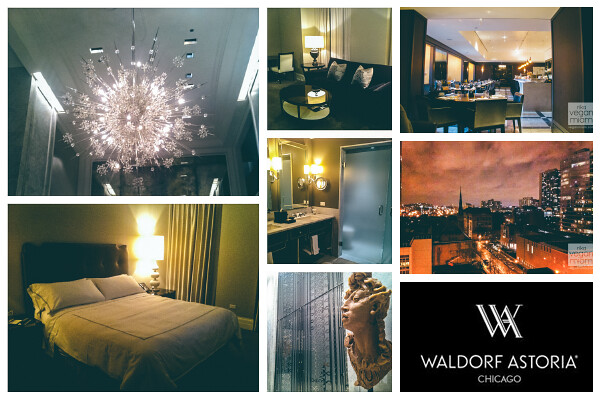 Since most FHR rates include fully refundable cancellation policies, it is easy to book and then inquire about their ability to provide vegan dining options. Occasionally when a hotel is not able or willing to provide a vegan dining option we choose to cancel and move our booking elsewhere.

If you couldn’t tell, we love the AMEX FHR program, and we aren’t being compensated to write any of these things about this program.

Prior to arrival we emailed the hotel to inquire about vegan dining options for our inclusive breakfasts, then we had our travel agent (American Express) call them to confirm our requests for vegan breakfasts and also enter our request into the actual reservation. A few days before our stay, we called AMEX to repeat these steps just to be sure. Upon arrival we were informed of all our benefits and took this opportunity to confirm our vegan breakfasts. In hindsight, the man at reception wasn’t the most convincing when, after a bit of hesitation, he responded with assurances that the kitchen was highly capable and qualified and we would not be disappointed.

Breakfast was served at Balsan, a restaurant located on the third floor of the hotel. Despite contacting the hotel in advance and receiving assurances from the property that they would be prepared for our arrival, when we sat down for breakfast our first morning the restaurant was neither prepared nor aware of our vegan breakfast arrangements. The matter was escalated to the Restaurant Manager, who quickly turned it over to the Food & Beverage Manager. Unfortunately for us, she was taking no responsibility – instead of saying ‘I am sorry we messed up’, what she was saying was ‘I am sorry you’re in this situation.’

Shortly after this conversation I called AMEX. AMEX handled the situation admirably because they confirmed that they had record of contact with the hotel and could see our vegan breakfast arrangements in the special request section of our reservation and promised to speak with the F&B Manager. A short time later the F&B Manager was forced to apologize, finally admitting that the special request was present in our reservation but that it wasn’t where she expected it to be. After delivering a few more platitudes, she left to locate a chef to assist with making arrangements for the remainder of our stay.

The source of the problem was the breakdown in communication between the F&B manager and the restaurant, the F&B manager failed to provide the restaurant with the necessary information to procure the ingredients needed to make a decent vegan breakfast. All this aside; rather than making excuses, the chef was more interested in making up for this debacle and admitted this never should have happened. She promised to craft some dishes using local ingredients for our two remaining days in Chicago.

With all of that mess and stress finally behind us, we were eager (but also a bit anxious) to find out what the chef at Balsan had in store for us. Upon arrival for breakfast the following two mornings, the staff were noticeably more prepared. We were each presented custom menus with three vegan dishes crafted just for us. Since every dish sounded uniquely delicious, we decided to order them all. We ended up doing the same thing both days since each day offered a different custom made menu.

Despite the positive experience with the chef, the overall failures of the hotel largely due to poor service and management means that we cannot recommend The Waldorf Astoria Chicago for vegans (especially since the chef in question is no longer with the property). We certainly don’t expect to always be able to find vegan options at hotels when we travel; but when you take the time to contact them in advance, make arrangements and are given assurances, that’s when we ultimately feel let down when they are unable to deliver. 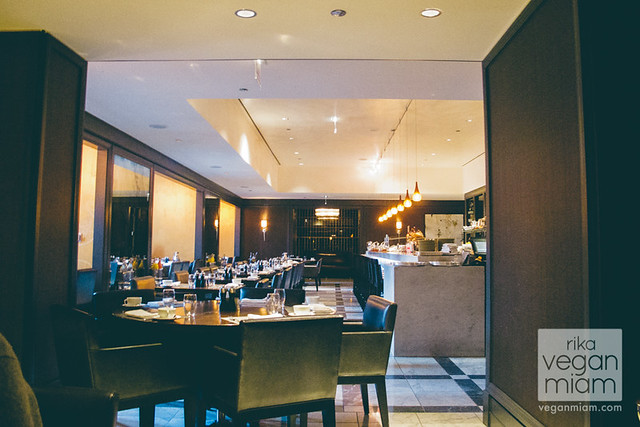 The Waldorf Astoria Chicago: Dining area of Balsan, a restaurant on the third floor of the hotel. It wasn’t busy in the morning. 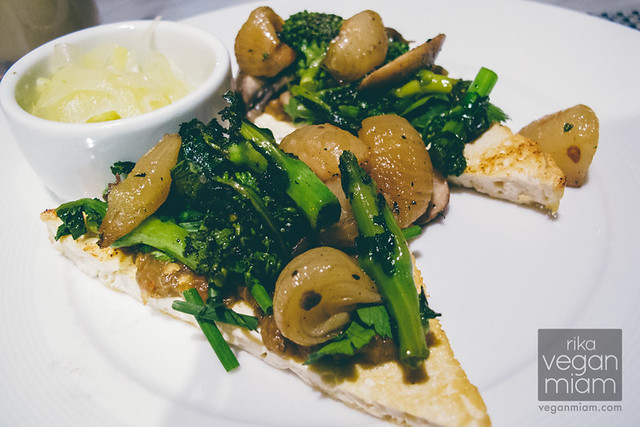 The Waldorf Astoria Chicago: Over an hour had passed, we had received our meal for the day – a small plate of underseasoned sautéed mushrooms and greens over two slices of tofu admittedly assembled using the few ingredients the line cooks could find. It wasn’t very good and was also probably sullied by the overall mood of the morning. 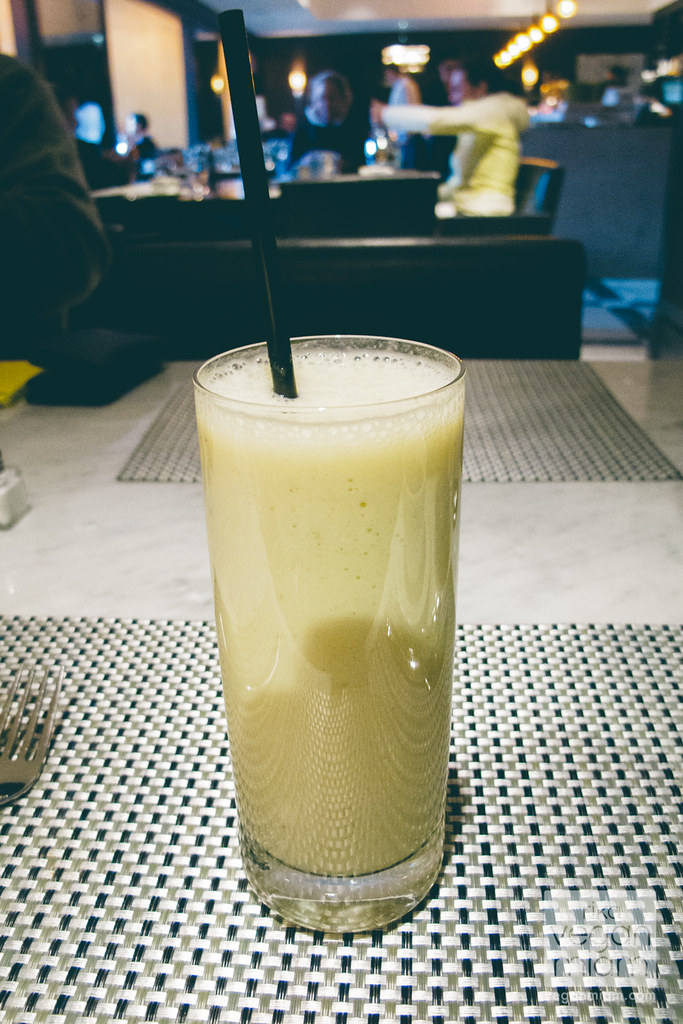 The Waldorf Astoria Chicago: Rika asked for a smoothie – pineapple, banana and soy milk. It was a bit lukewarm but filling. She had to ask for the second one since we had to wait for our breakfast for an hour. 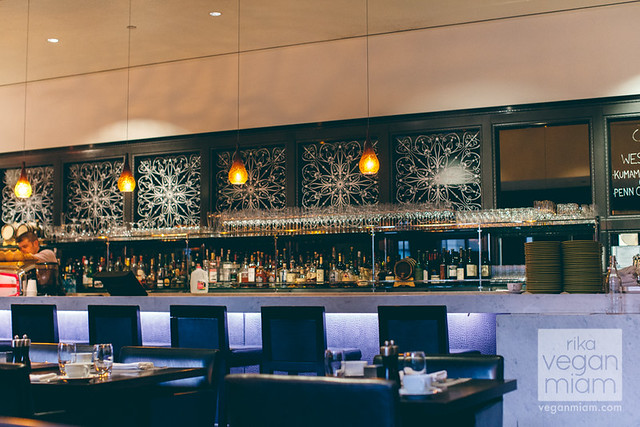 The Waldorf Astoria Chicago: Sat by the windows, towards the bar area of Balsan. 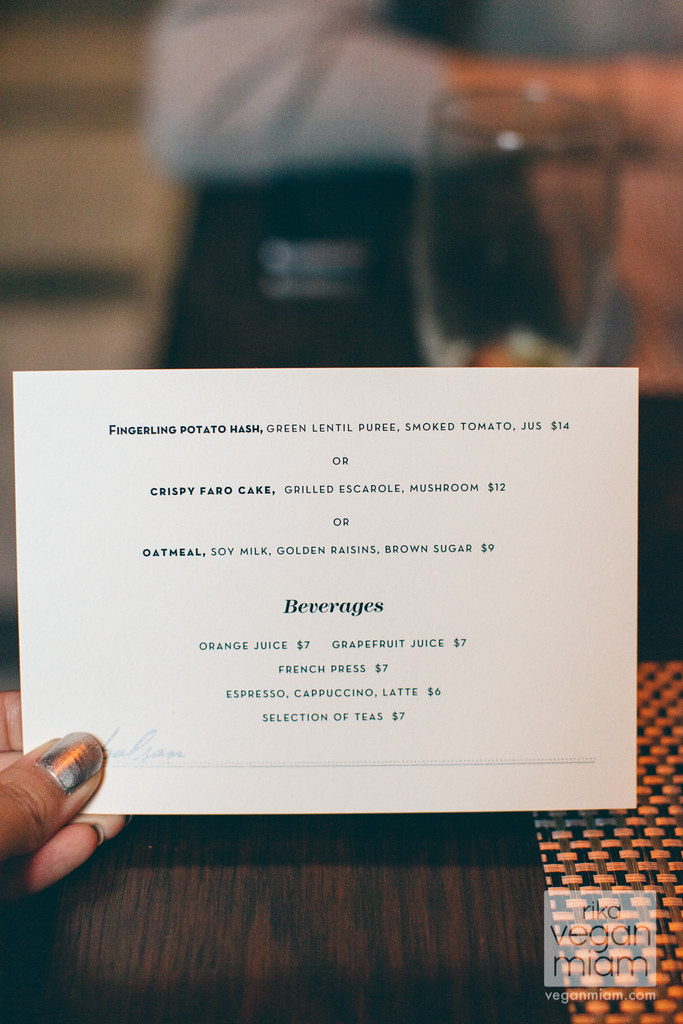 The Waldorf Astoria Chicago: We were each presented custom menus with three vegan dishes crafted just for us. Since every dish sounded uniquely delicious, we decided to order them all. We ended up doing the same thing both days since each day offered a different custom made menu. 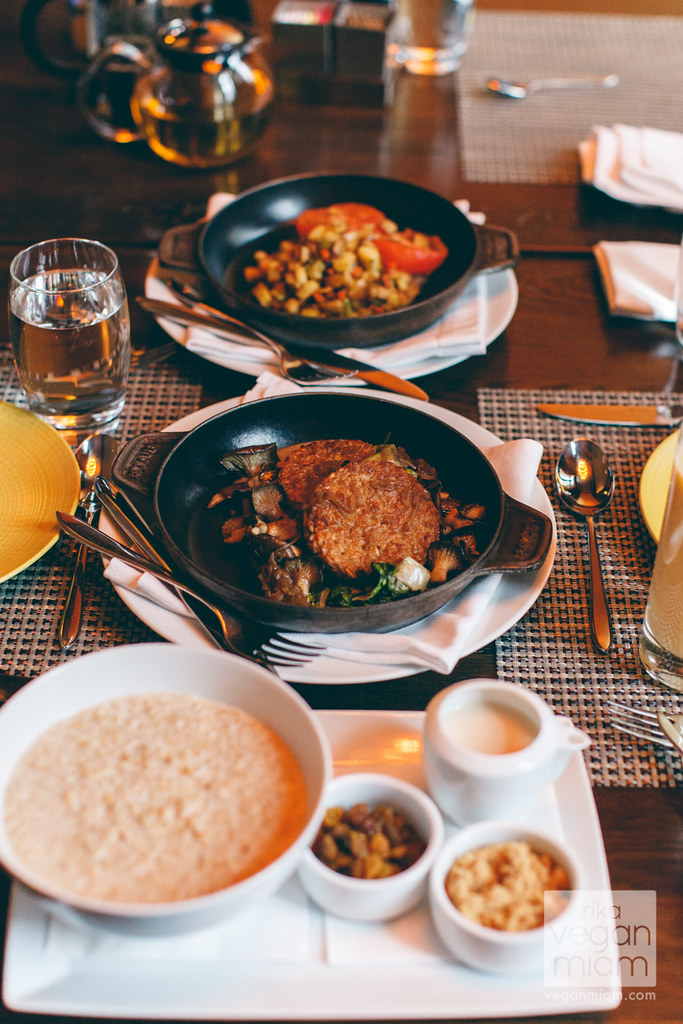 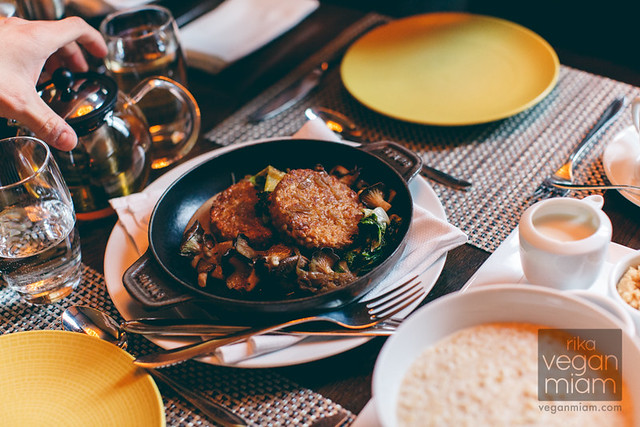 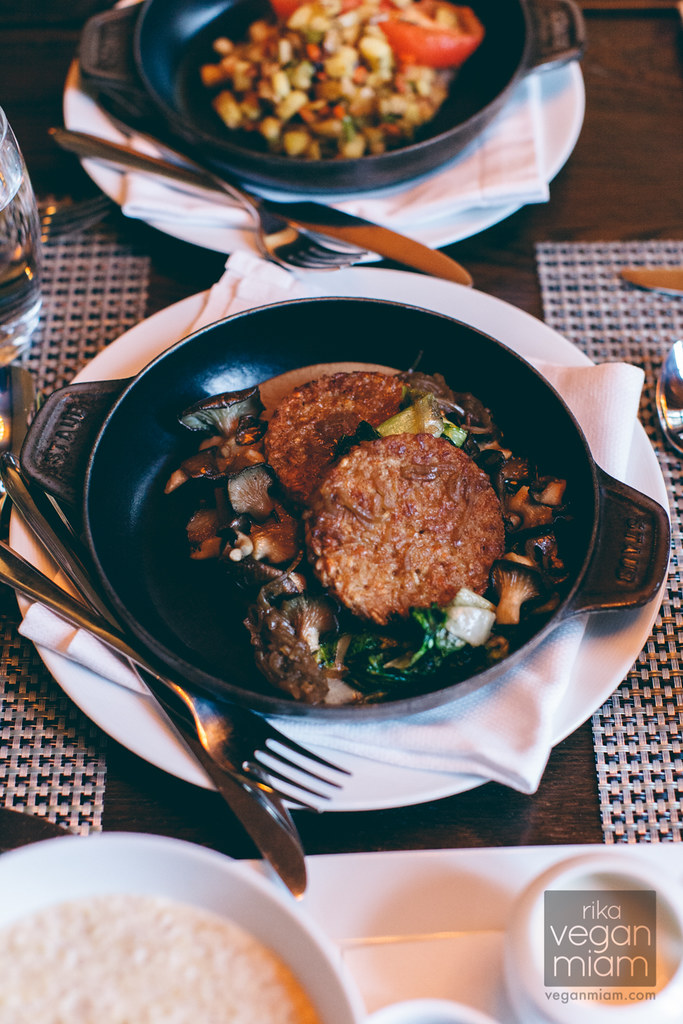 The Waldorf Astoria Chicago: Vegan Crispy Farro Cake with Grilled Escarole & Mushroom ($12). It was a pretty unique dish and it was our first time to try crispy cakes made of farro, and we had faro before. 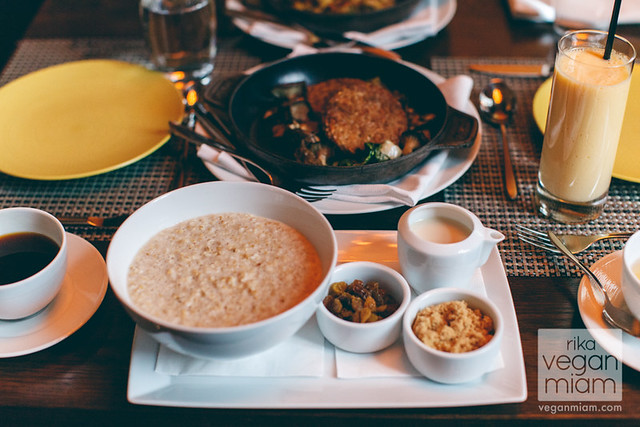 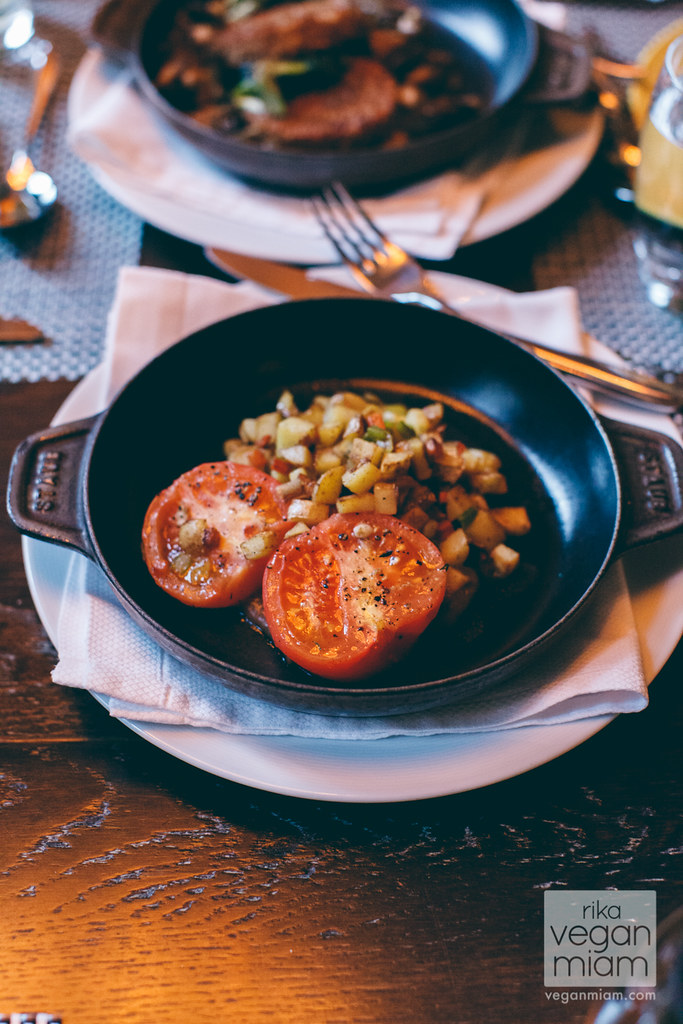 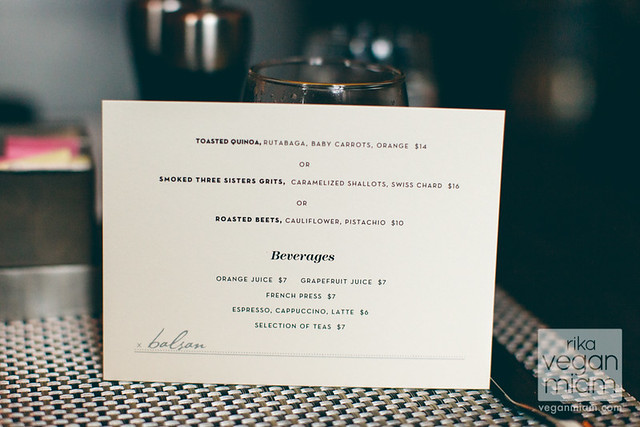 The Waldorf Astoria Chicago: We were each presented custom menus with three vegan dishes crafted just for us. Since every dish sounded uniquely delicious, we decided to order them all. 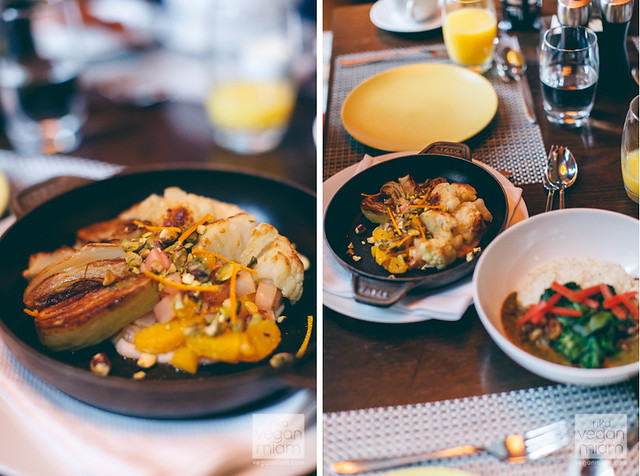 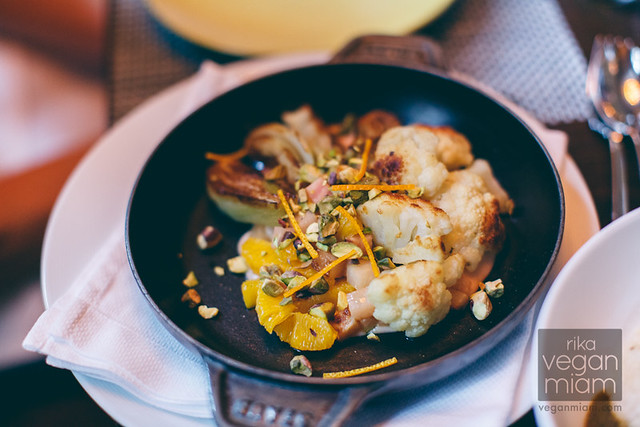 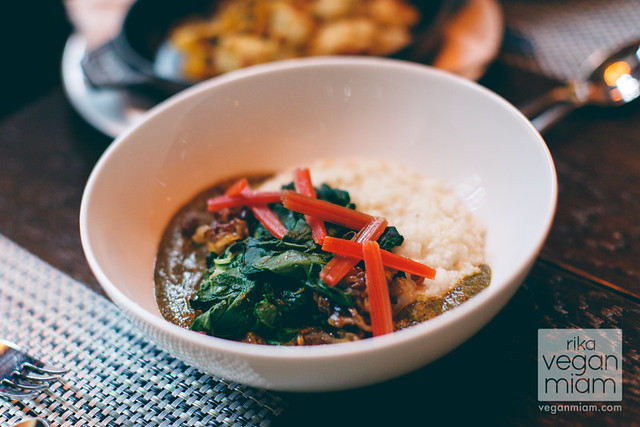 The Waldorf Astoria Chicago: Vegan Smoked Three Sisters Grits with Carmelized Onions & Swiss Chard ($16), was our favorite dish for Day 3 Vegan Breakfast. It was hearty and filling. The grits,Three Sisters is sourced from a farm outside of Chicago. 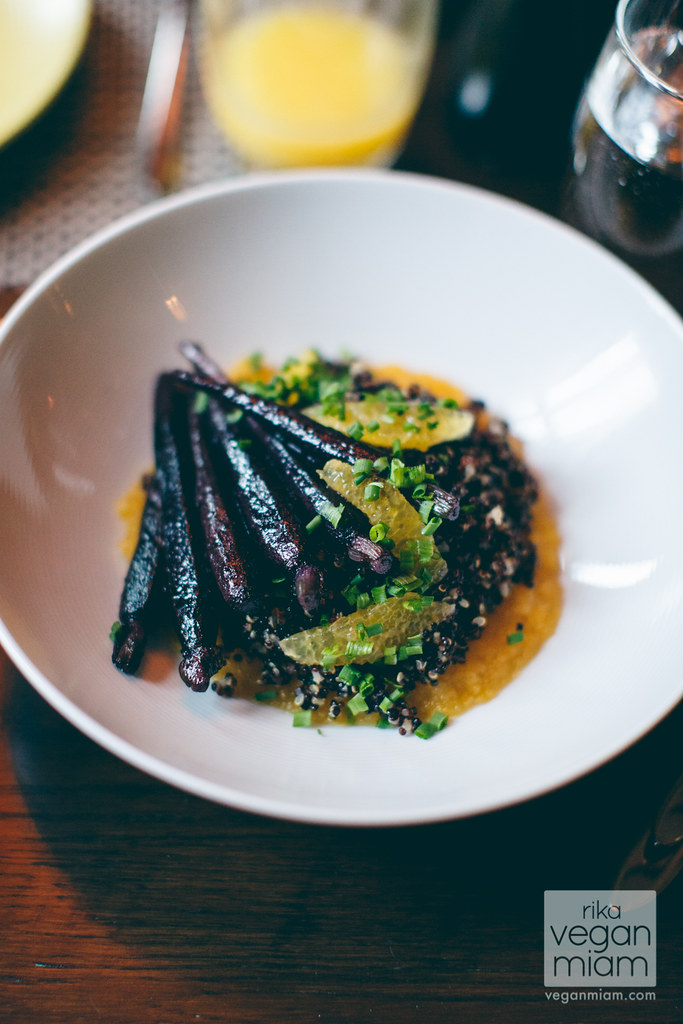 The Waldorf Astoria Chicago: Vegan Toasted Quinoa with Rutabaga, Baby Carrots and Orange ($14) is a very gorgeous dish…we loved it!

Upon our arrival, we received an upgrade to a 1124 square feet Luxury King Suite at The Waldorf Astoria Chicago. The Luxury King Suite comes with a furnished outdoor terrace, fireplace, separate bedroom with king-size bed, living room with dining table & queen sleeper sofa, full master bath with a soaking bath and a separate powder room. 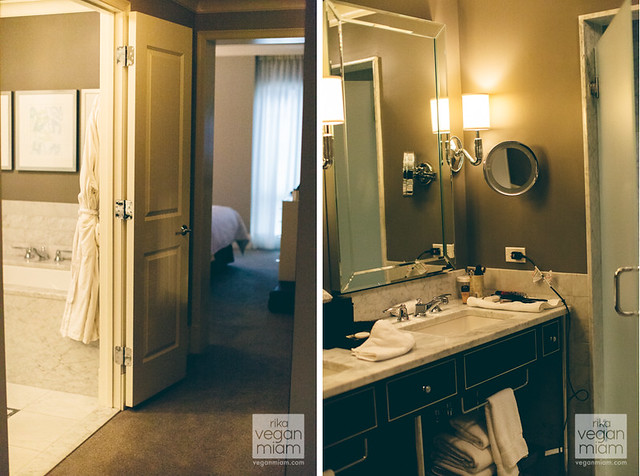 The Waldorf Astoria Chicago: Luxury King Suite’s hallway to the bedroom and the bathroom 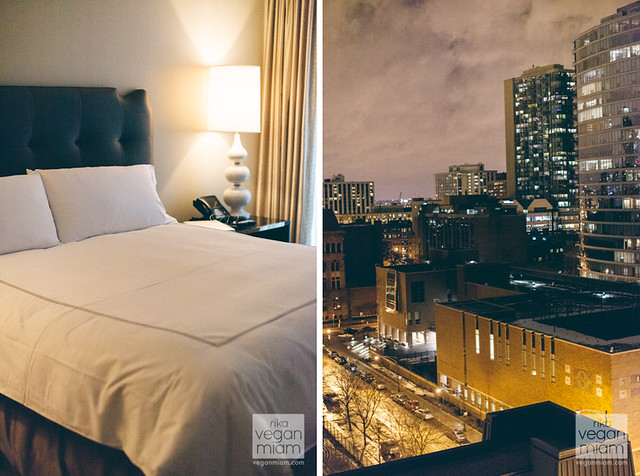 The Waldorf Astoria Chicago: The bedroom and the view of Chicago 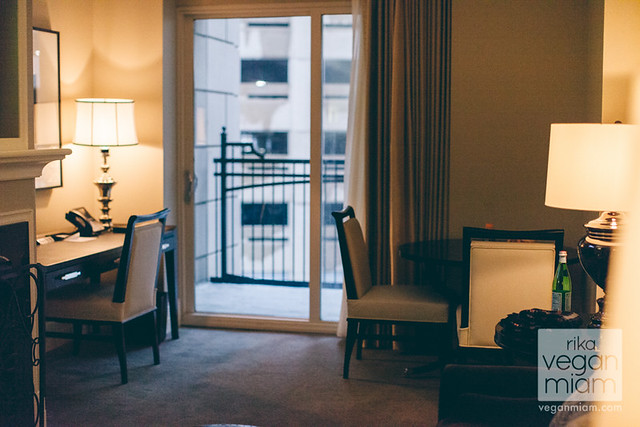 The Waldorf Astoria Chicago: The living area and the balcony. 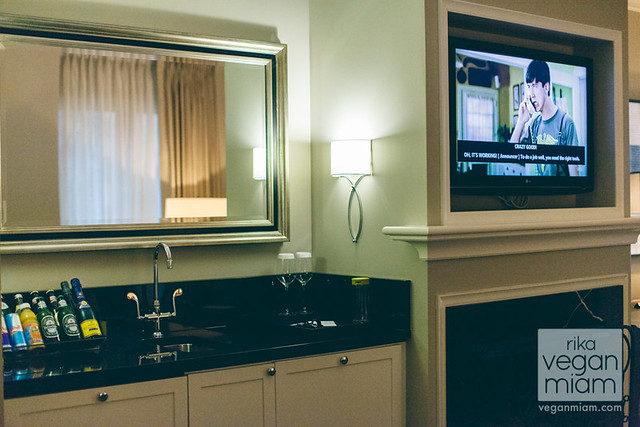 The Waldorf Astoria Chicago: Living area with a dining table and an outdoor terrace – also a wet bar including refrigerator, freezer and microwave. 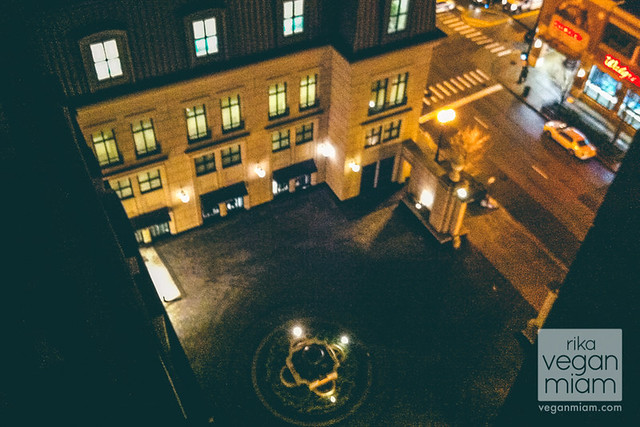 The Waldorf Astoria Chicago: Front entrance and courtyard of the hotel in the evening 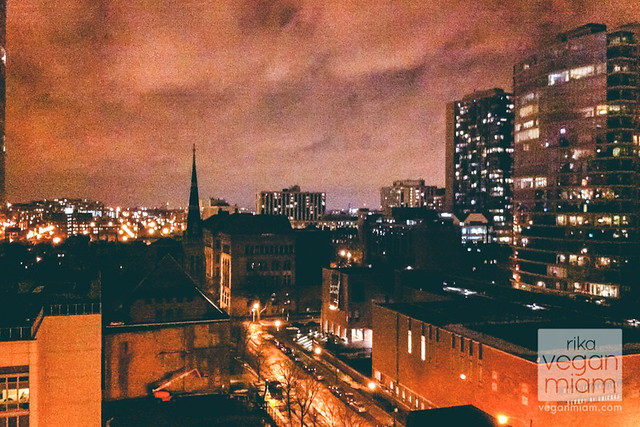 1. What’s the best vegan breakfast you’ve ever had at a hotel?
2. We loved the crispy farro cakes, have you ever cooked or tried farro?
3. Did you ever determine whether grits is singular or grits are plural: Grits is yummy or Grits are yummy?