After a week in Mexico’s vibrant second city of Guadalajara, we found it difficult to leave behind the beautiful and bountiful Tapatío culture and cuisine. These vegan eats in Guadalajara were just a few of the highlights from our recent trip to a city that’s remarkably easy to see by foot and by Uber. Combine the rich local cuisine with a temperate climate, a weak currency and an overall dearth of tourists and you have one of our favorite destinations in North America. Consider skipping the coast and heading inland to Guadalajara for a truly local experience of Mexican cuisine and culture. 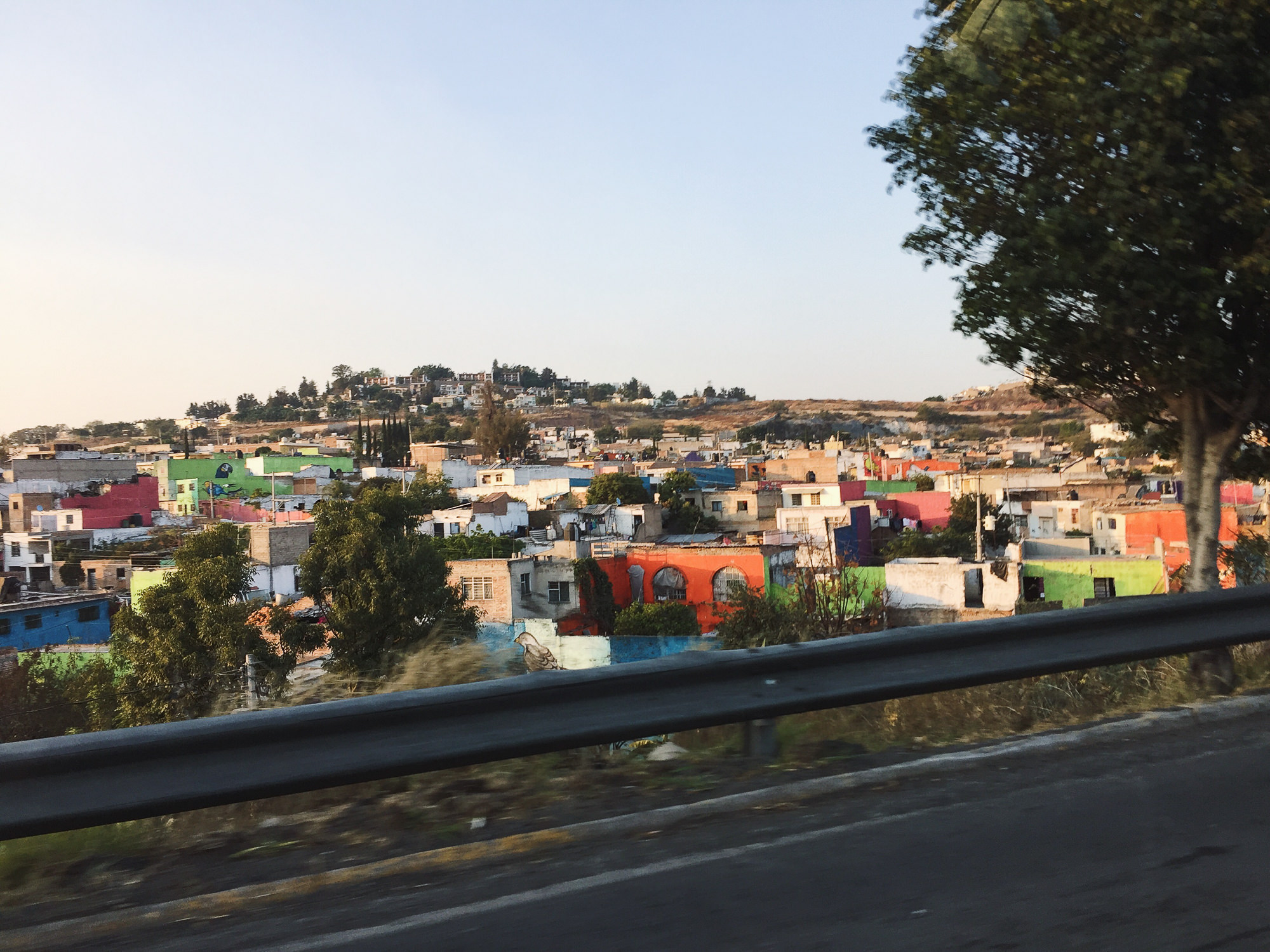 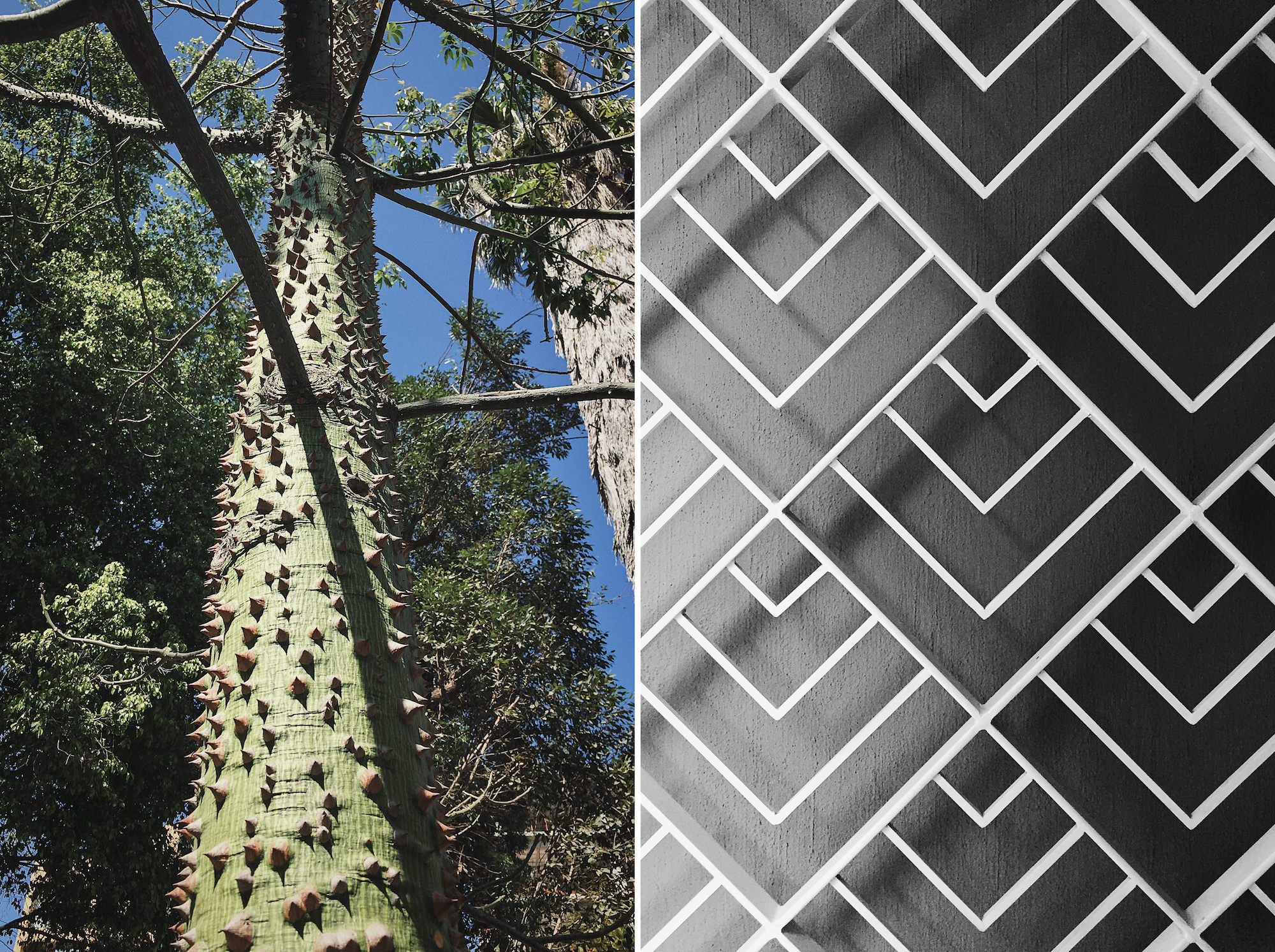 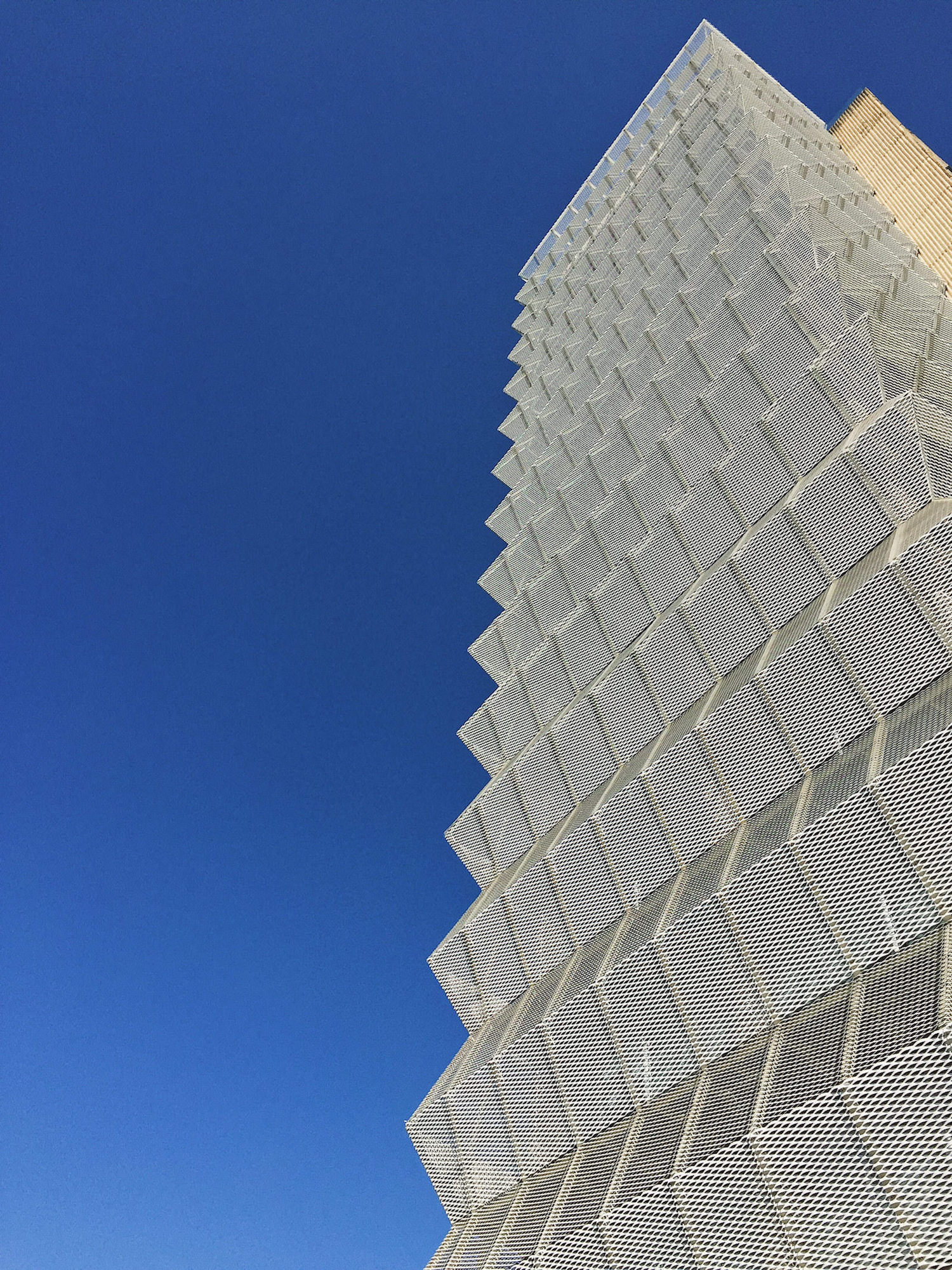 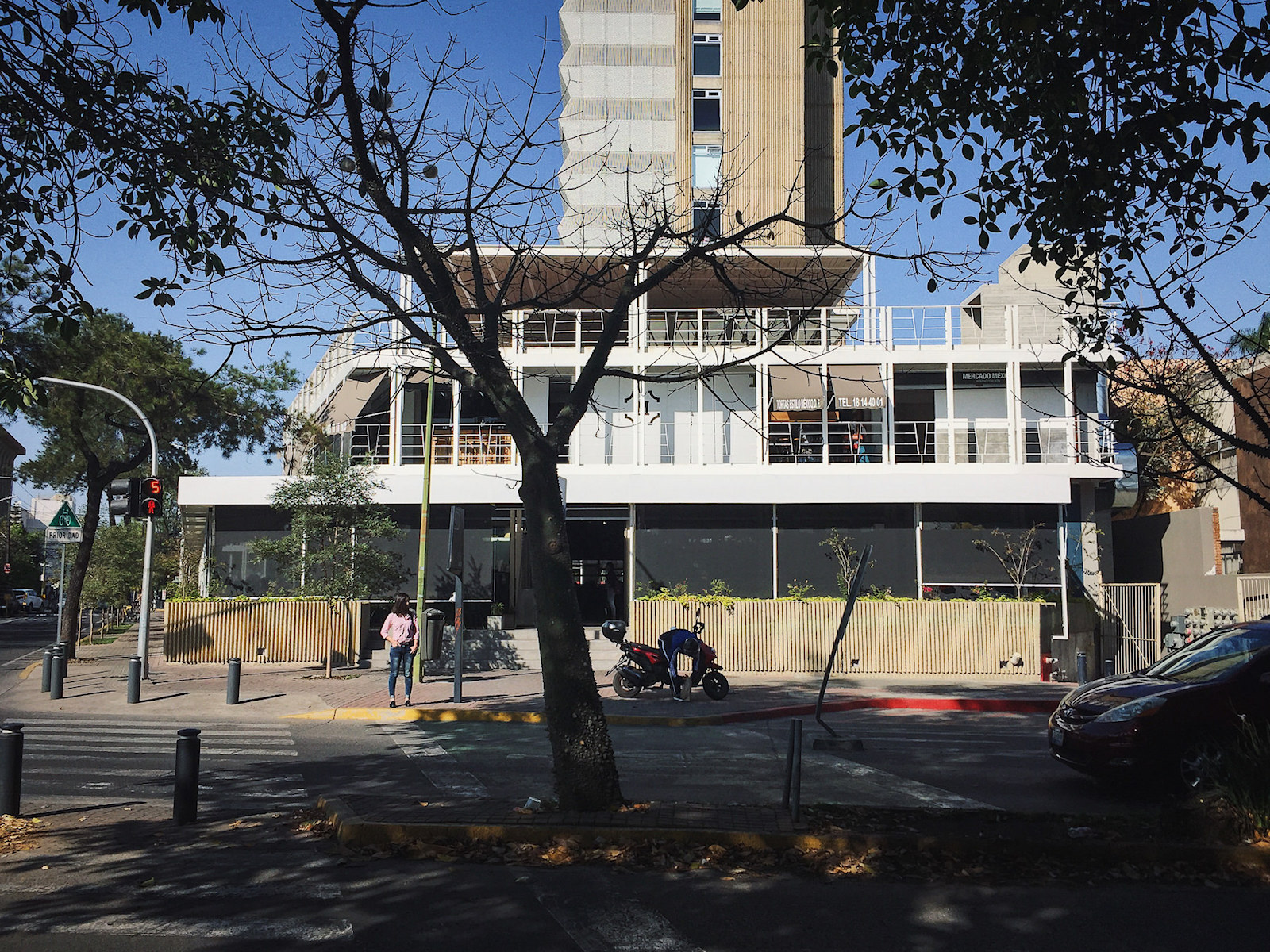 Our favorite place to eat in Guadalajara. Dishes are handcrafted by this small team who formerly operated a food truck before moving to the Comedor 20 food court. In March of 2017 they relocated to Mercado Mexico, a high-end and notable food court in Guadalajara. One of only a few vegan places in Guadalajara to offer breakfast (La Flaca has started to offer breakfast as well), you can’t go wrong with any of the traditional dishes on their menu. We frequently chose to start our day with their Lonches Bañados and Chilaquiles con Tofu Revueltos. For another traditional Mexican breakfast we also love their Molletes con Chorizo de Quinoa. Later in the day they do a stellar Enchiladas de Cebolla con Queso and Tacos No Fish (de Coliflor). The exceptional food and friendly people at El Vegano made this our regular stop in Guadalajara. Be patient, since it’s a small operation and the food is made to order it may take a bit of time but it’s well worth the wait. 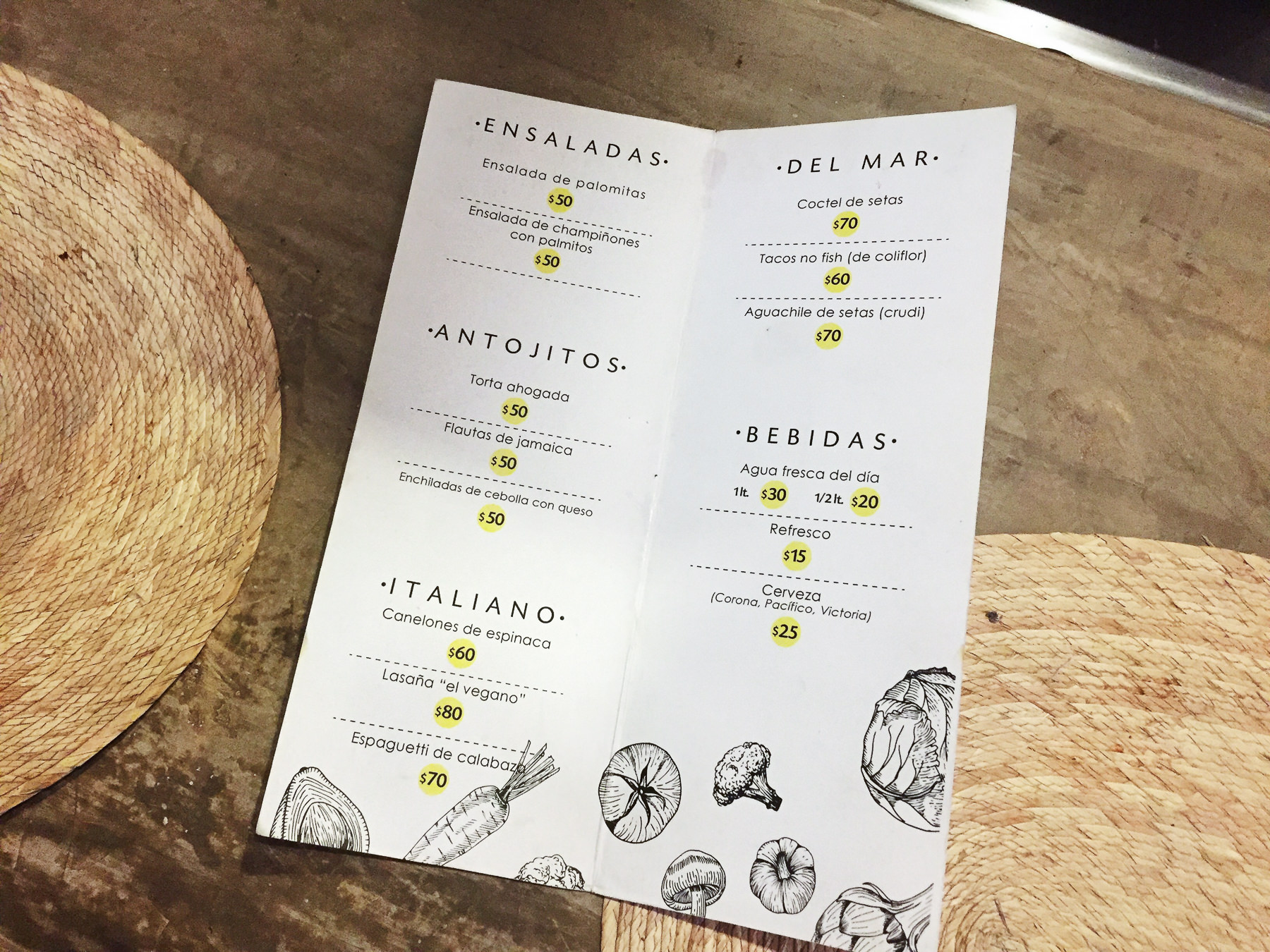 El Vegano offers both local and Italian dishes. We only tried the local offerings – all of which we highly recommend. 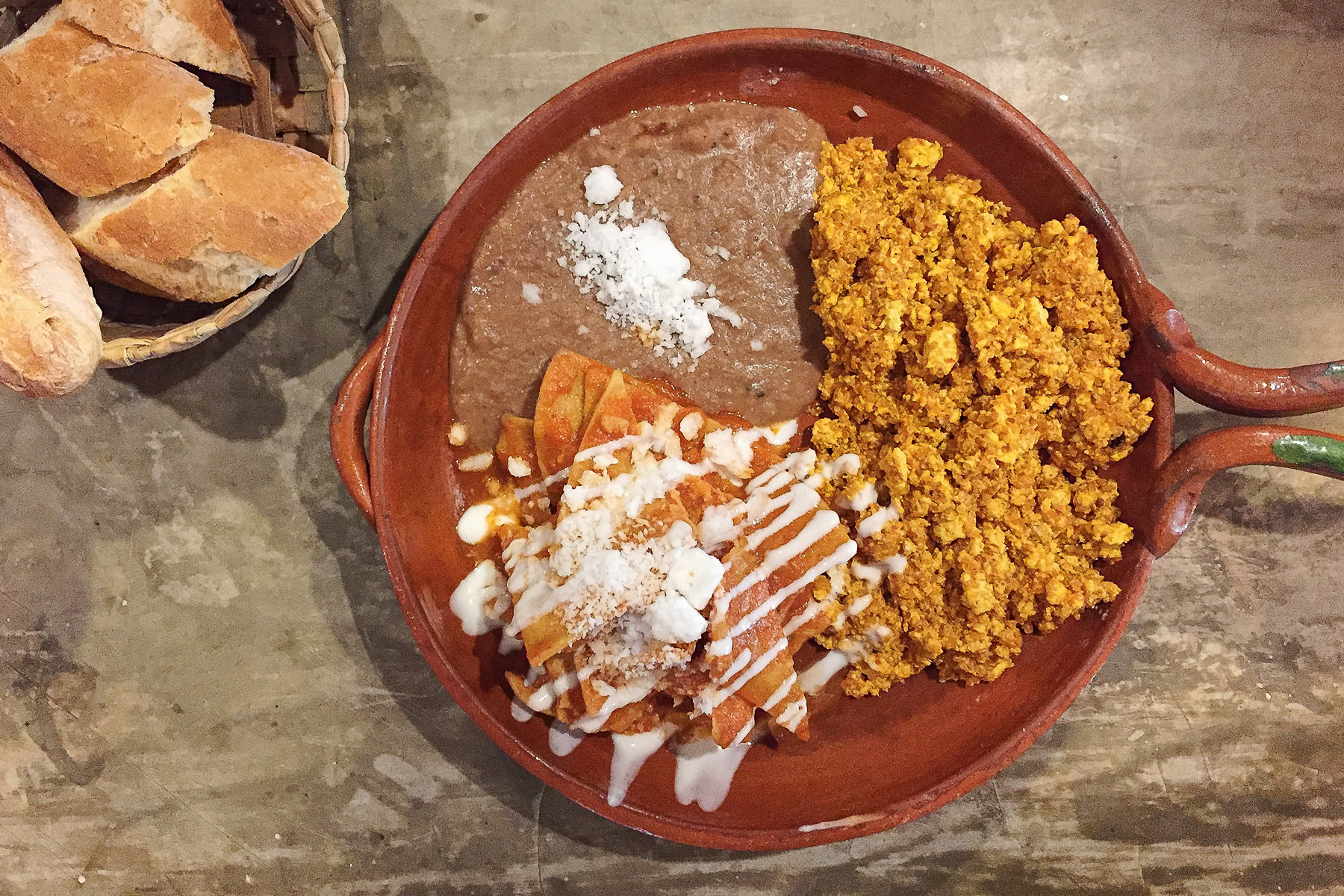 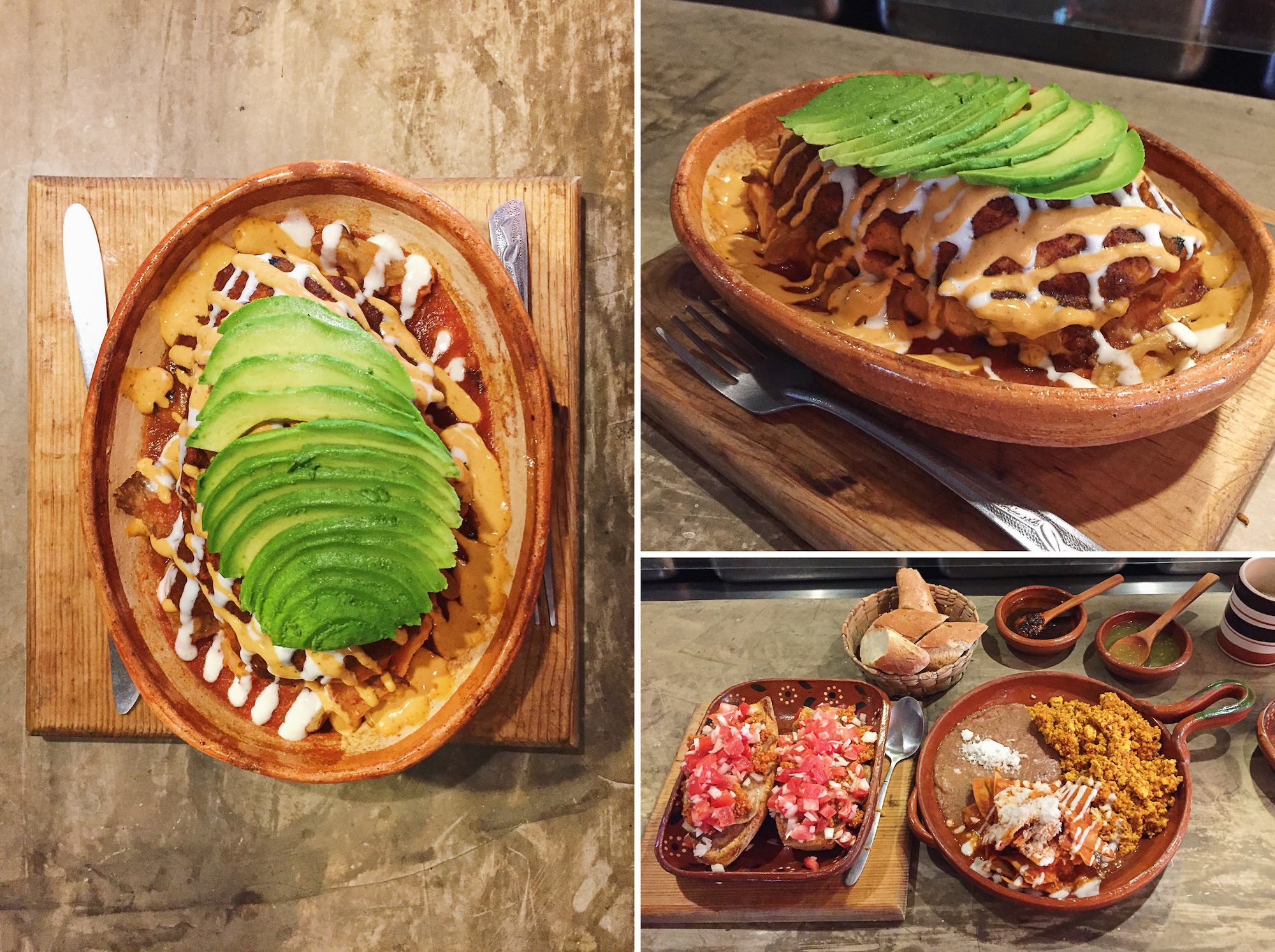 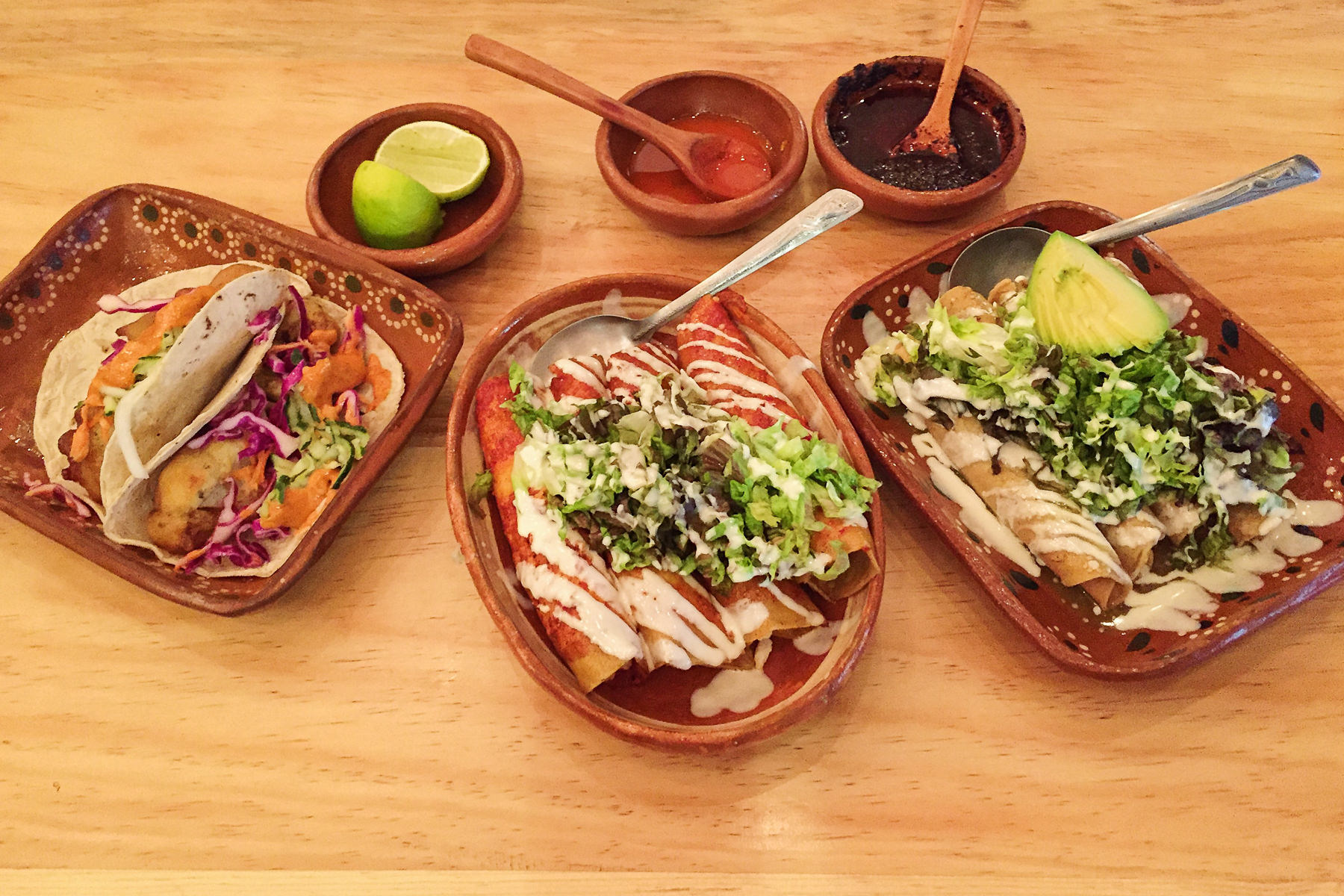 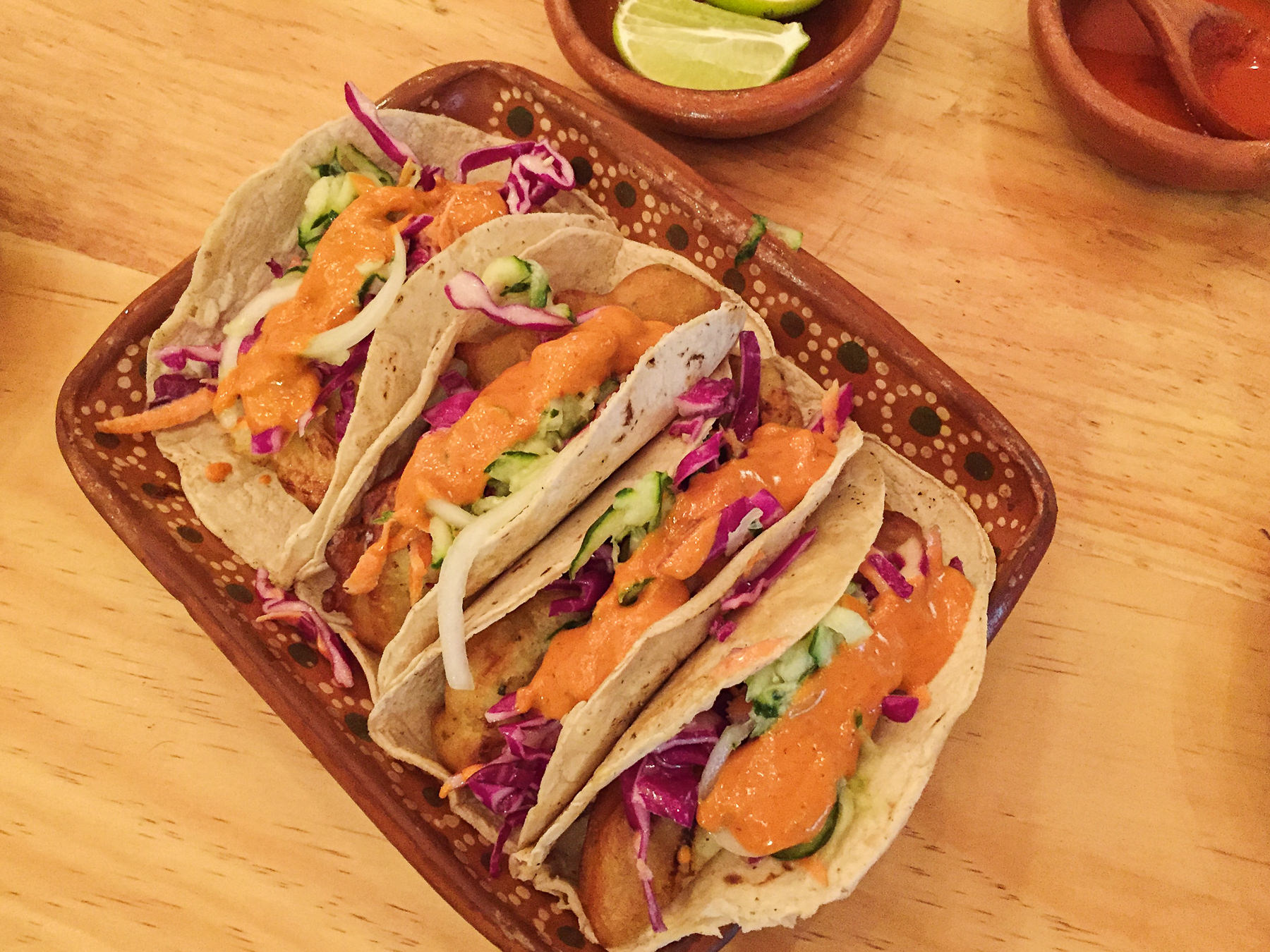 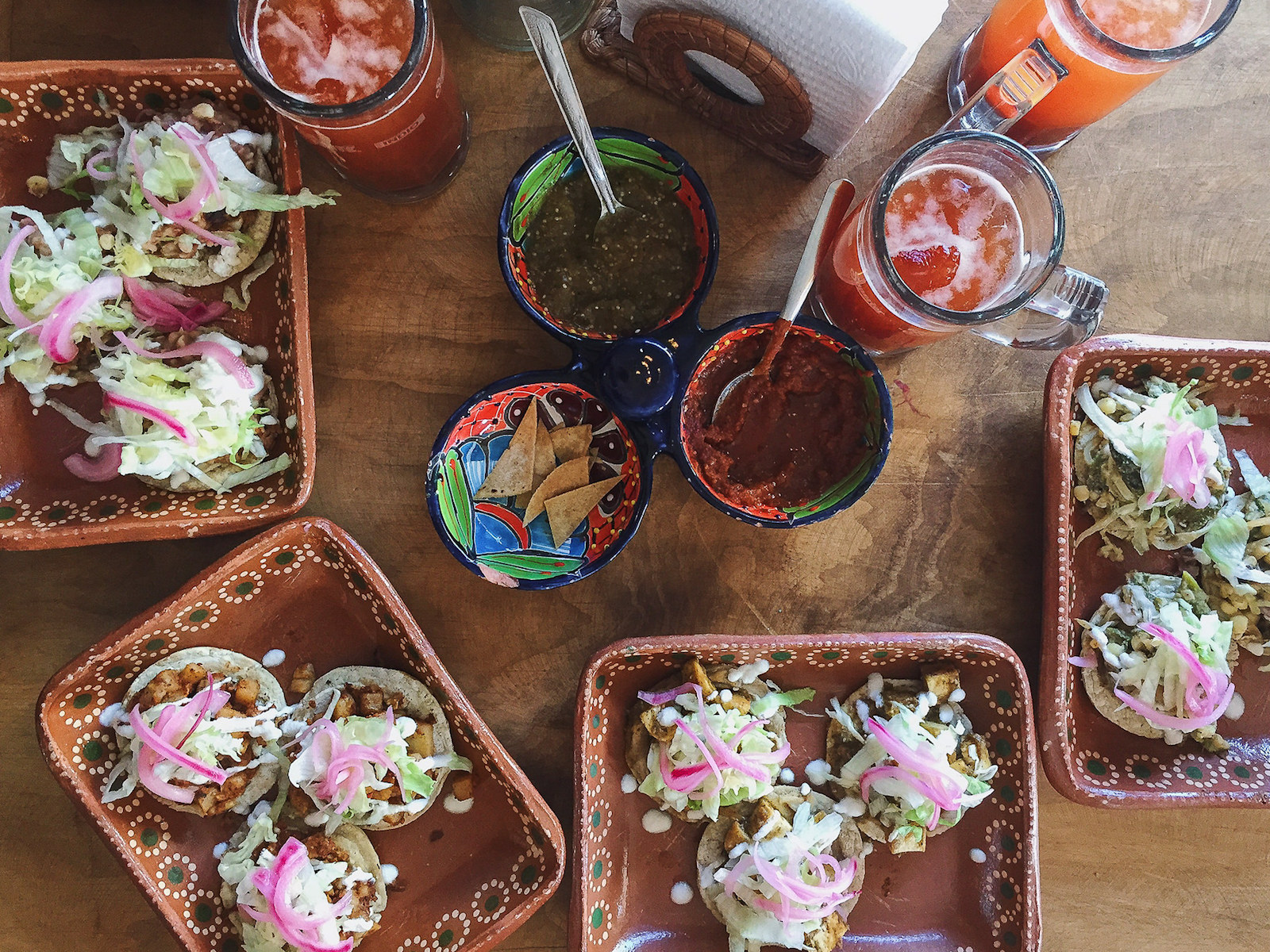 Vegan Sopes from La Flaca, we sampled every flavor – our favorites were the Tofu en Salsa Verde and Rajas con Crema. Enjoyed with vegan Micheladas.

Opened in 2016, La Flaca is entirely vegan and conveniently located just off of Chapultepec. This small place has a nice vibe, open air seating, free wifi and a compact menu. The highlights were their takes on two local soups, Setas en su Jugo and Pozole. We tried all five of their sopes (also available as tacos or tostadas), some were exceptional while others were distinctly under-seasoned. La Flaca is well worth a visit, but has the potential to be even better. Relax and enjoy your food with an ice cold Michelada. 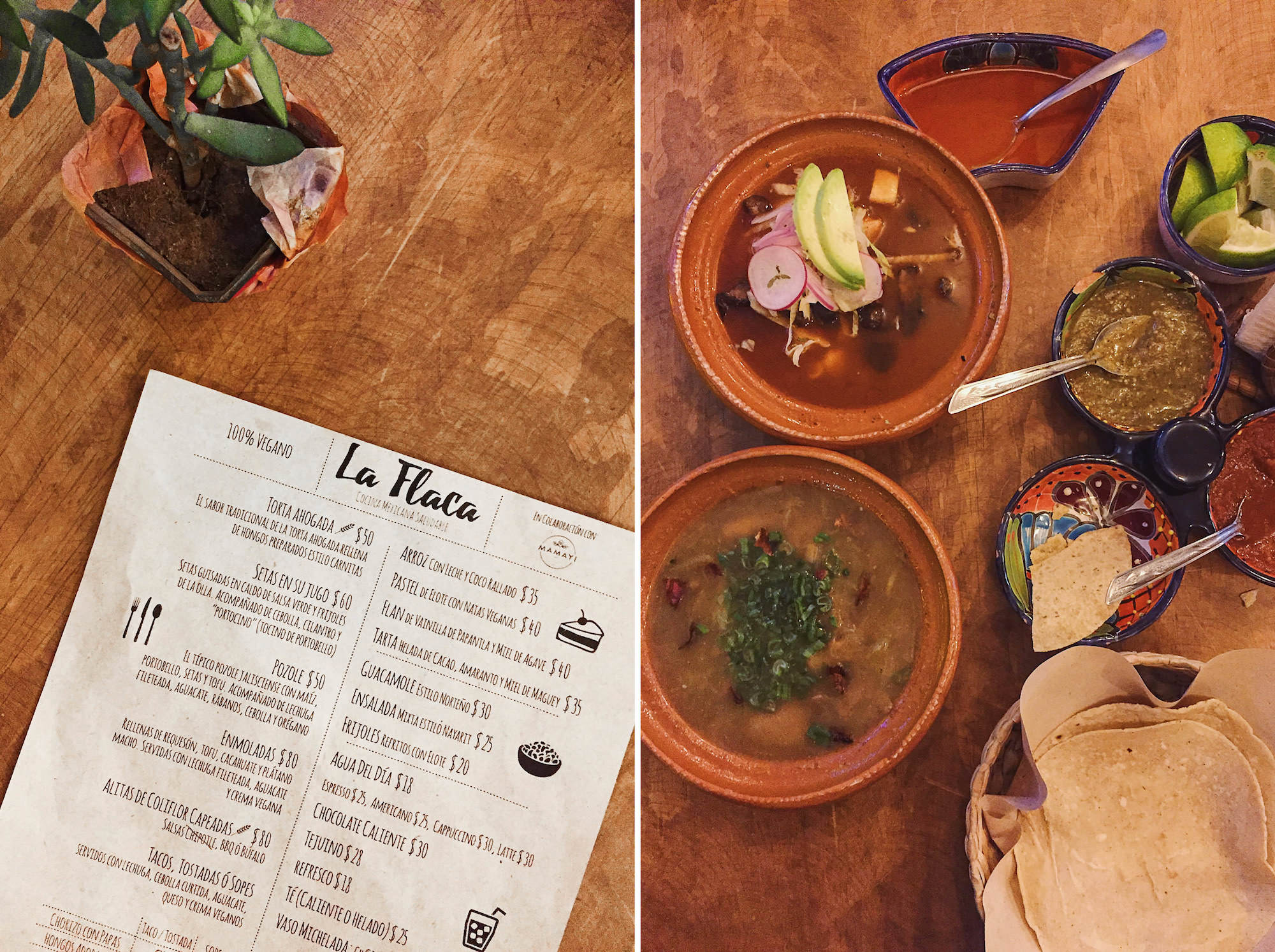 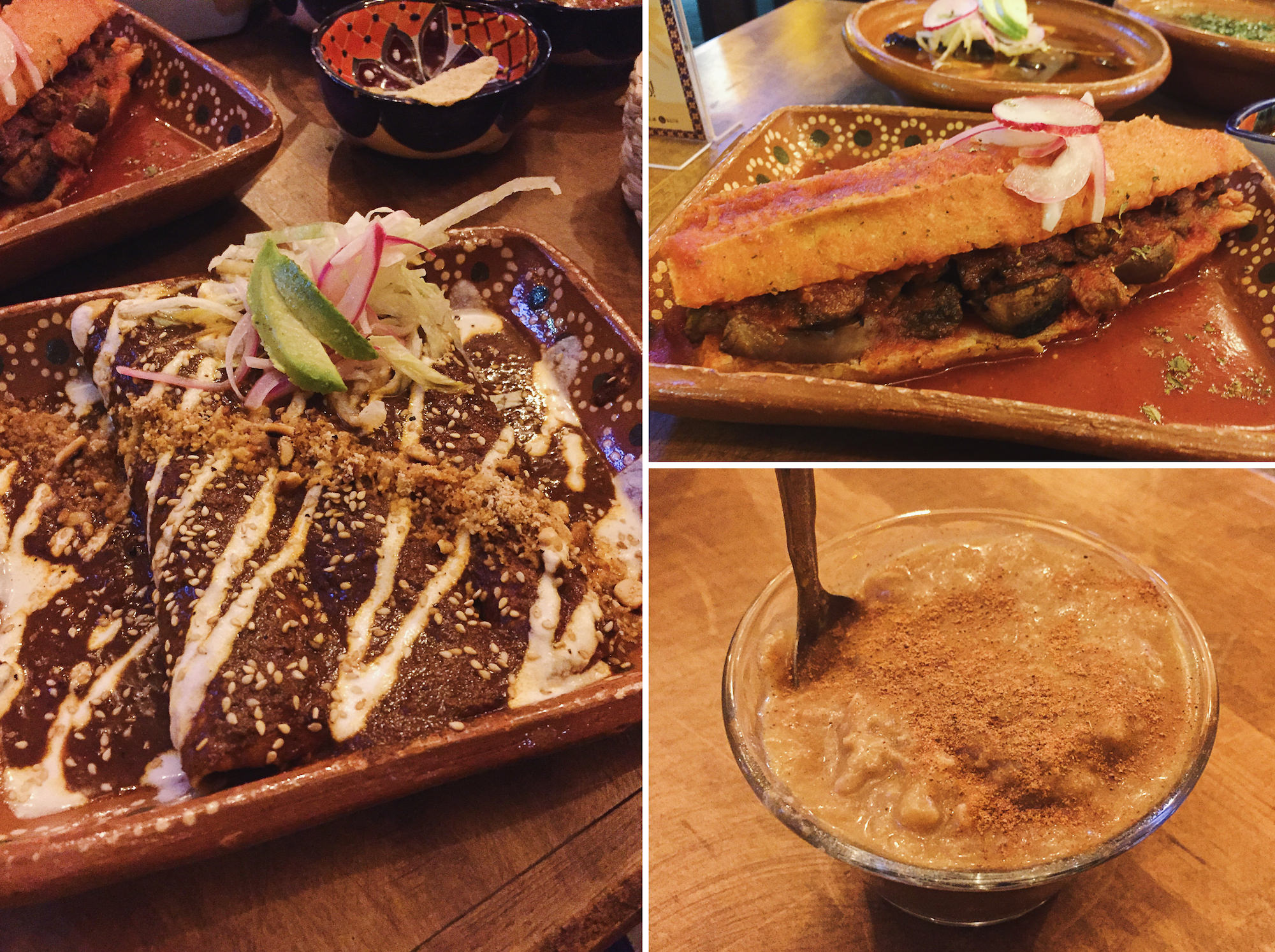 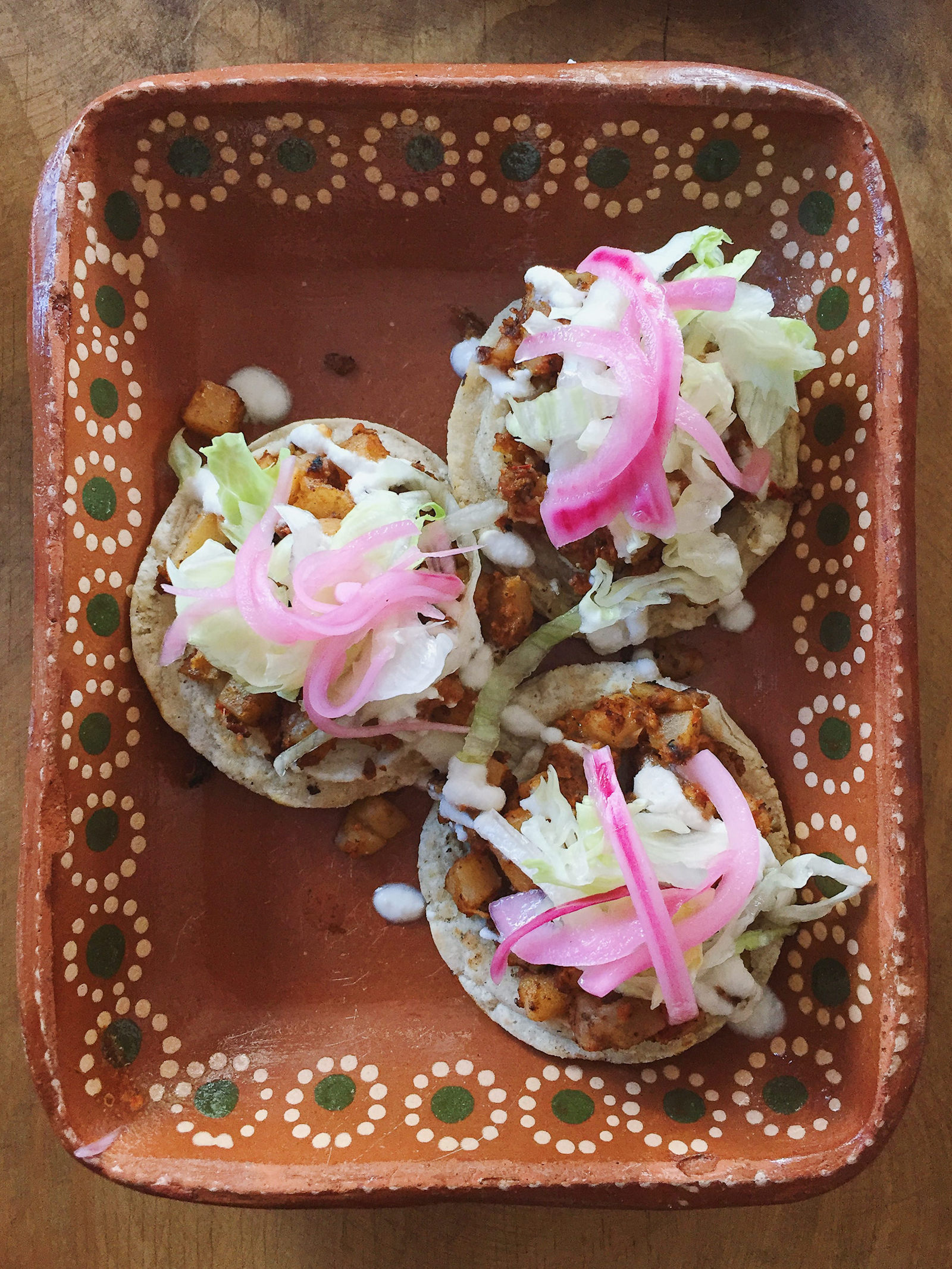 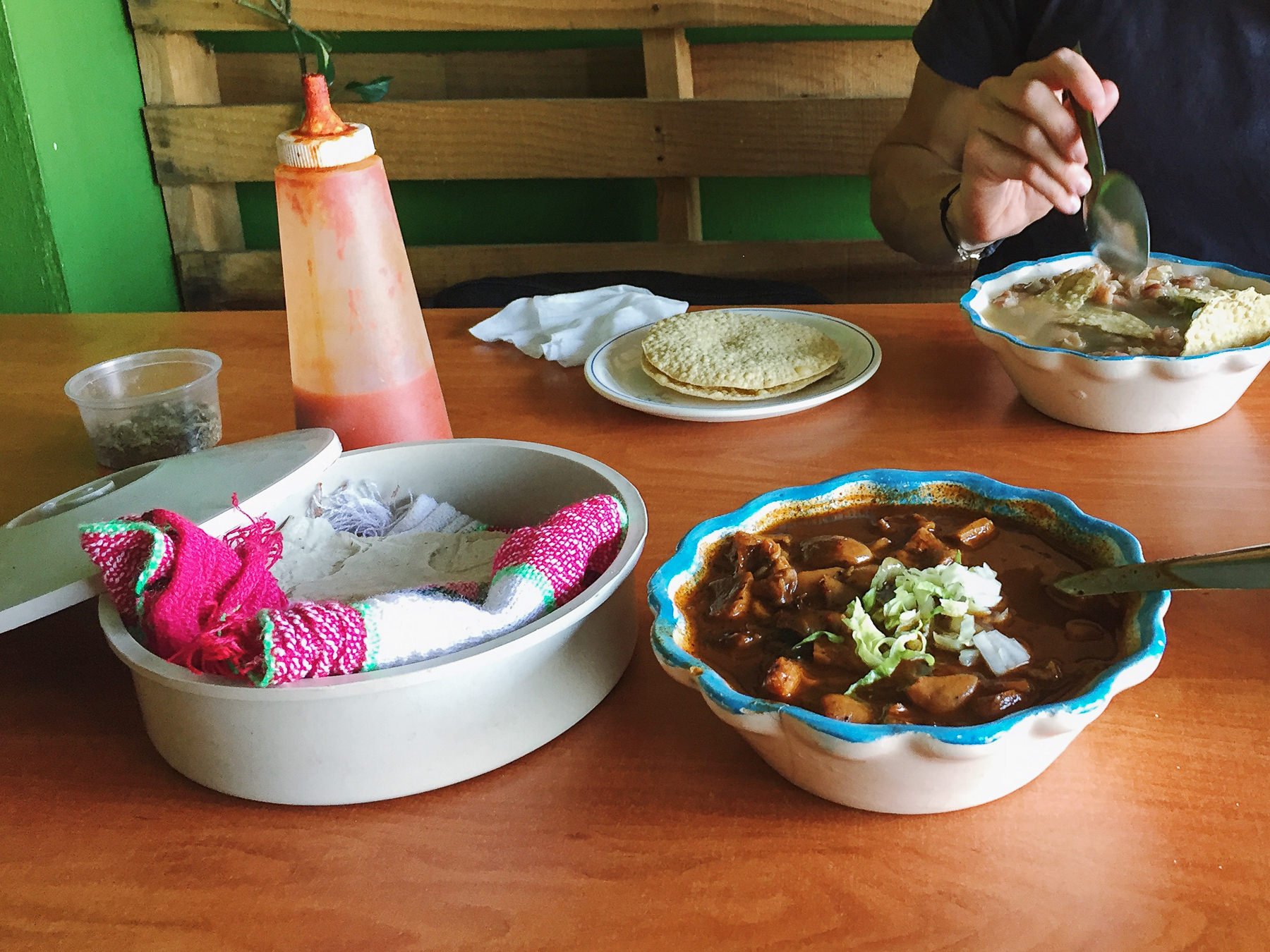 Vegan Menudo at Tía Ofe Pozole, made with mushrooms instead of tripe, served with dried oregano and fresh tortillas.

A tiny, familiar local vegan eatery halfway between Chapultepec and the old town. The menu is limited, the food is well seasoned and the service is brisk. Pozole and Menudo are the specialties at Tía Ofe Pozole. This small hole in the wall restaurant on a busy street offers authentic, unfussy local flavors. All dishes are available for takeaway and on the weekends they also make tamales. The salty and robust menudo has a reputation as a great hangover dish. Since traditional menudo is made with tripe, we were eager to try a vegan version (using mushrooms) at Tía Ofe Pozole. Overall it was a unique and enjoyable meal. 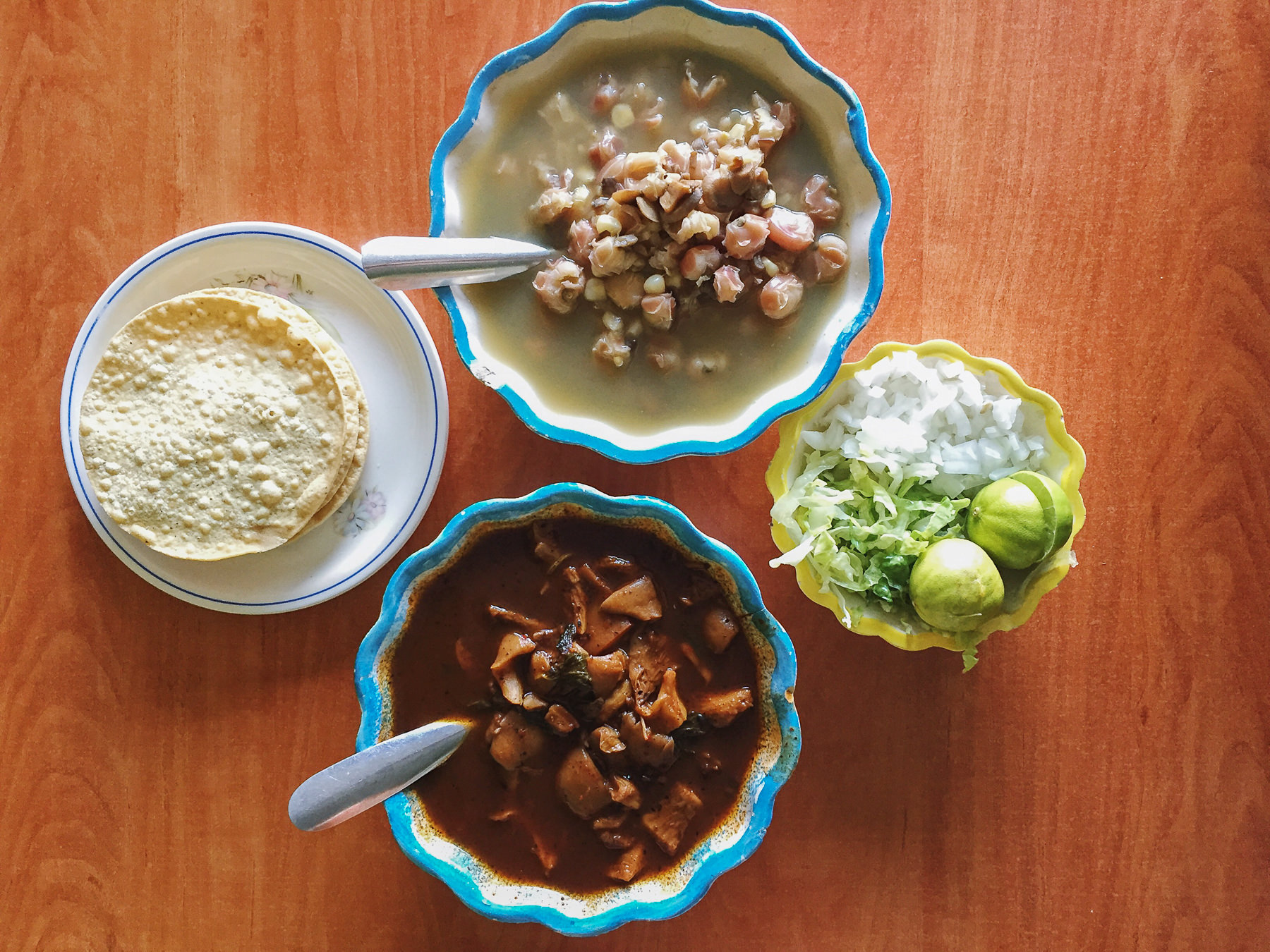 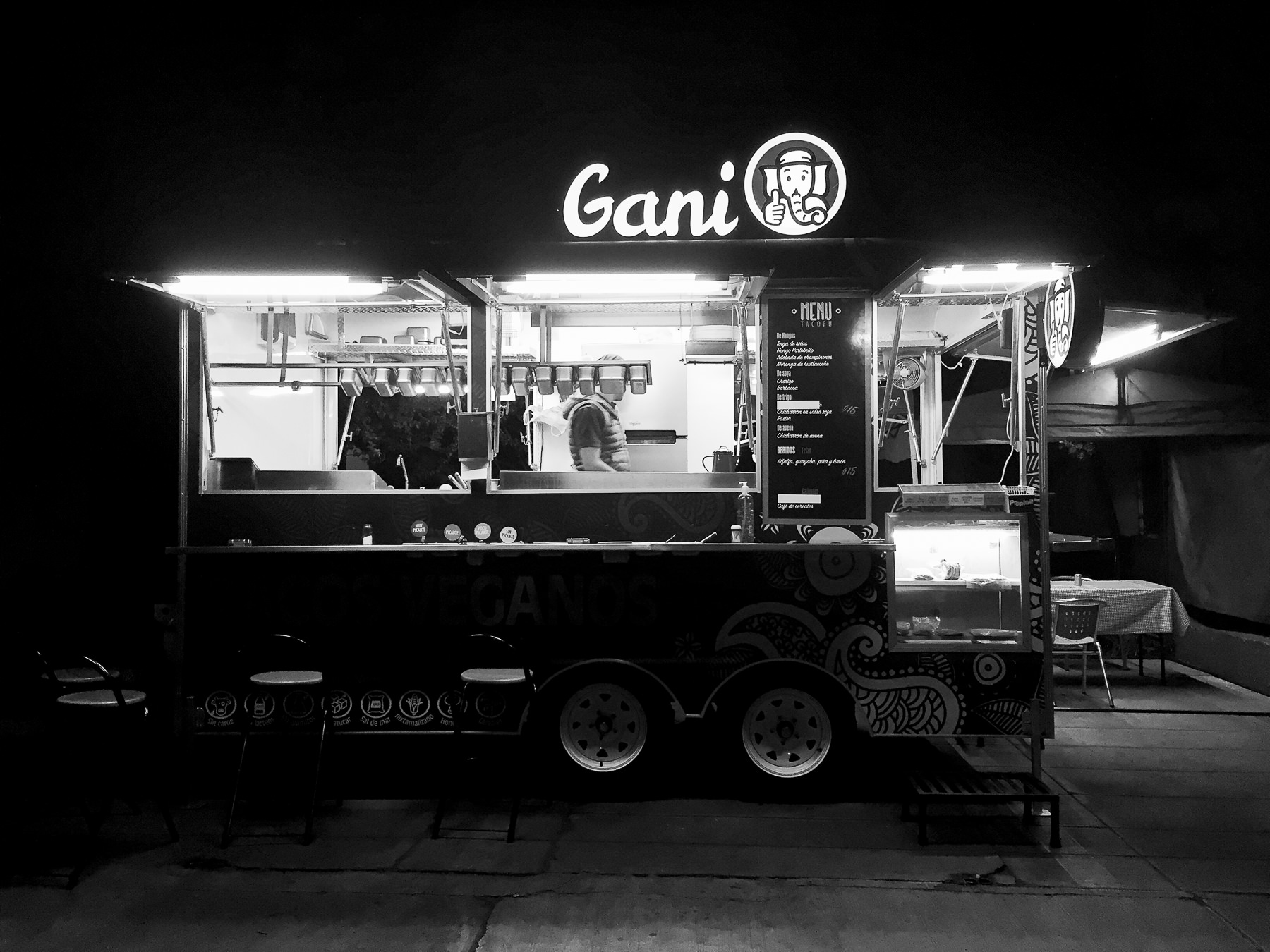 This entirely vegan taco food truck has a semi-perminant location with dining tables. Best reached by car and away from the main walking center of Guadalajara, Gani Tacofu is from the afternoon through the evening. It is very much worth a visit for a late night snack. When we visited they offered 9 varieties of vegan taco fillings – mostly mushroom, soy and gluten based – but have since added more taco options along with hamburgers to their menu. Traditional salsas and condiments are available for garnish. Gani fu is clean, well priced and really enjoyable. They also make their own tortillas. At the time of our visit tacos were MX$15 each but prices have recently increased slightly. 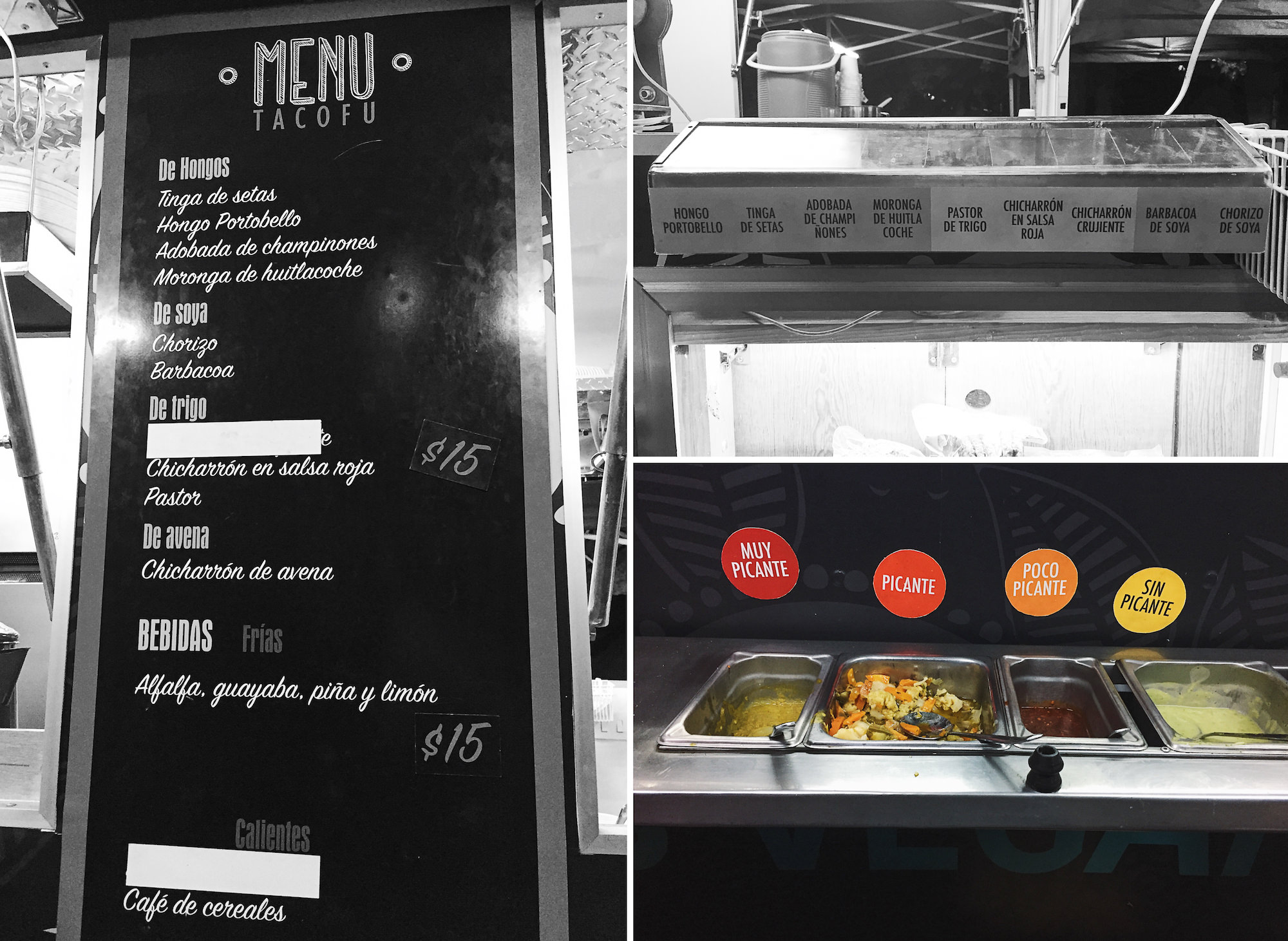 Gani Tacofu is a clean and modern vegan food truck with a simple menu and fresh, clearly labeled condiments. 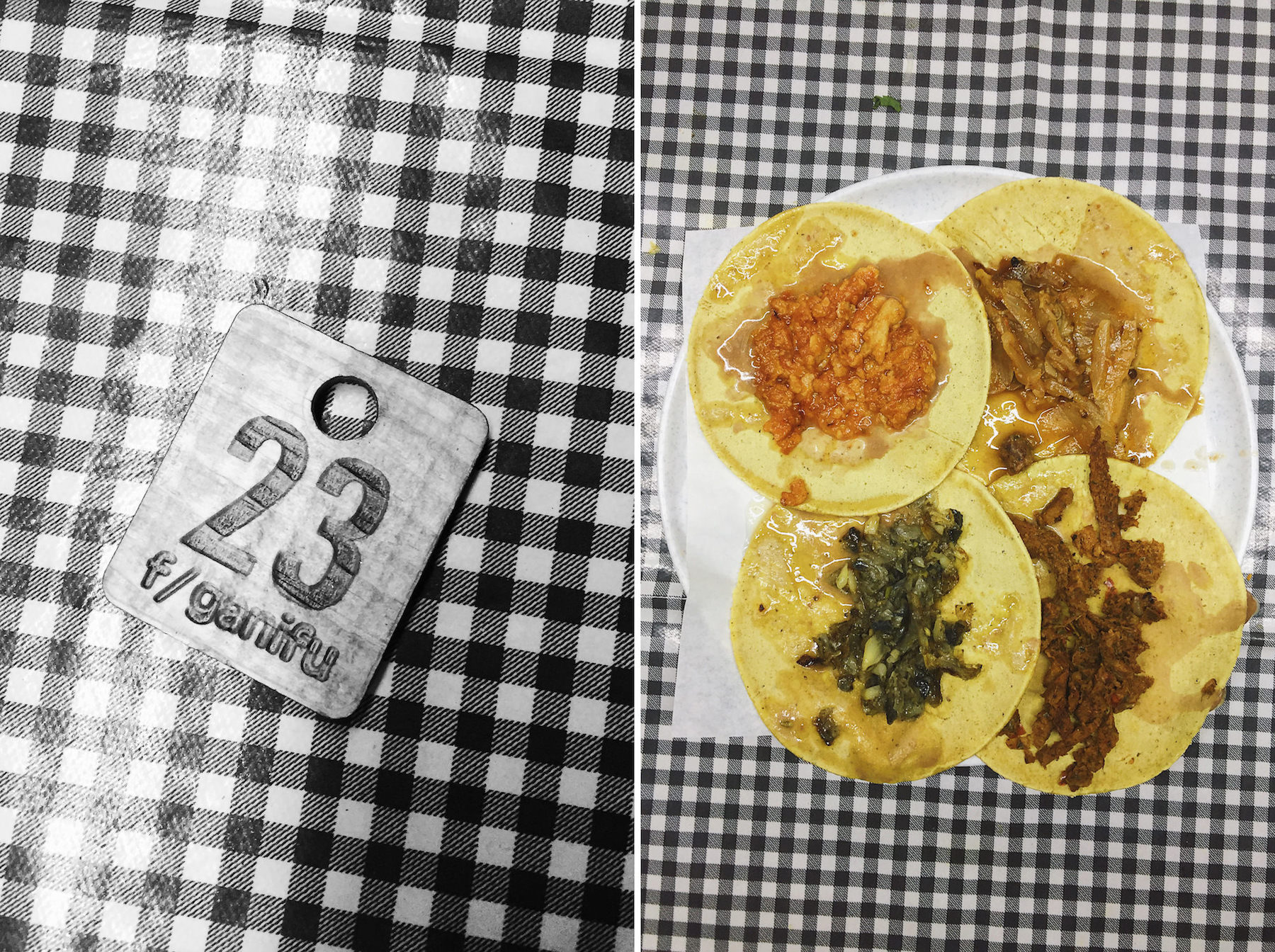 Order, take a number and wait. Tacos are cheap so try a variety! 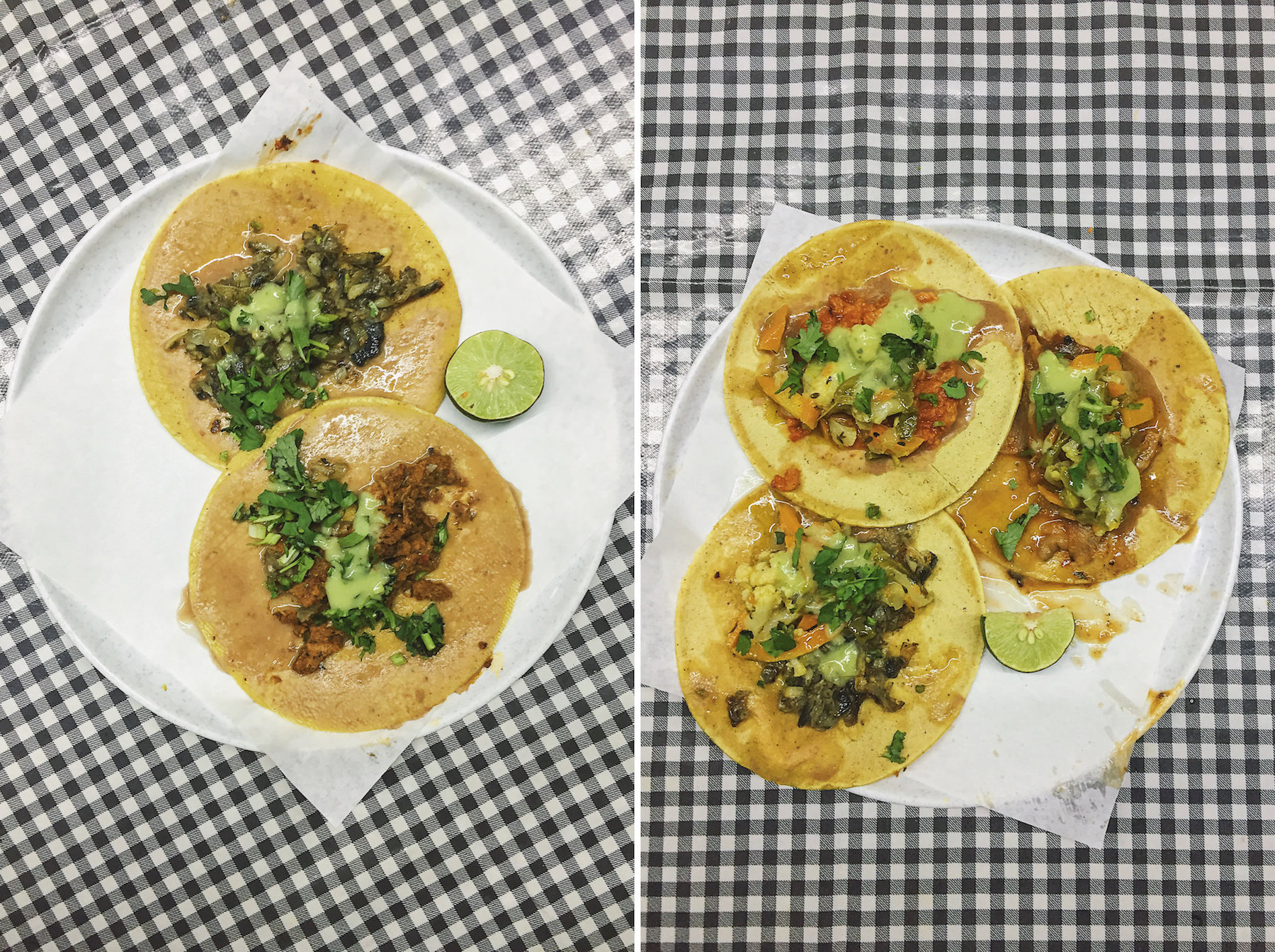 At Gani their vegan tacos are mostly made from mushrooms, soy and seitan. Since our visit (February 2017) they have expanded their menu. 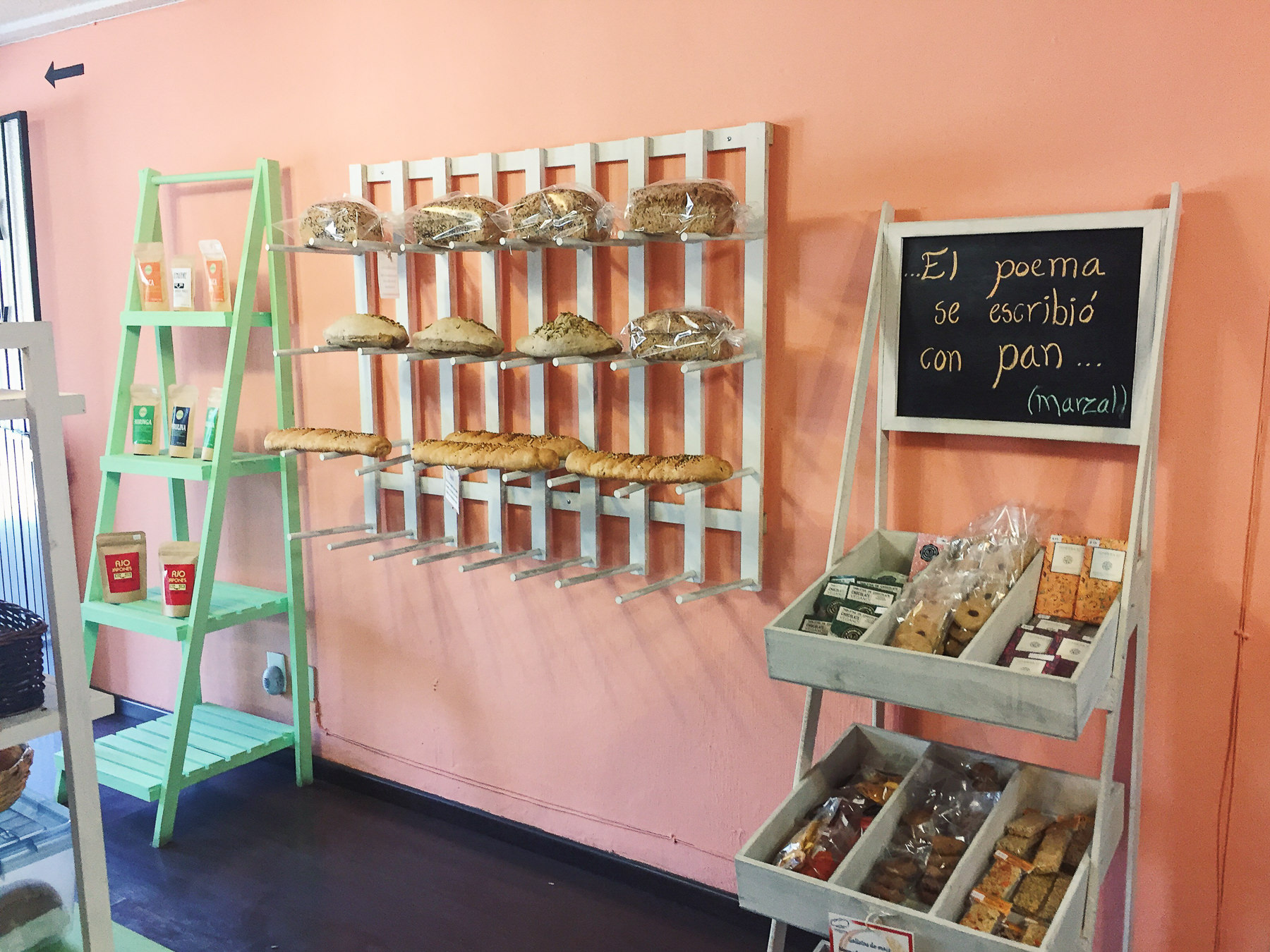 Vegan Bageri is a vegan bakery located in southern Zapopan, a suburb of Guadalajara, near to the Expo Center and ideally reached by Uber or taxi. They are open 6 days a week (closed Sundays) and their selection varies each day. Their prices are exceptional given the quality and the size of the pastries. They distribute to a number of stores and restaurants around Guadalajara and also sell directly from their bakery in Zapopan. They offer an exquisite selection of Latin and European style pastries and breads. On our visit, prices ranged from MX$9-20 per piece. If you get a chance, try their Conos de Coco…oh so good!

Rol Especial MX$20 (this was their chocolate and orange cinnamon roll)
Orejita MX$18 (also known as a Palmera or Palmier)
Bigotes MX$17 (a croissant with a chocolate-hazelnut filling)
Conchitas MX$14 (often referred to as a Pan Dulce in the US)
Granadas MX$14 (referred to as such for its resemblance to a pomegranate, filled with chocolate) 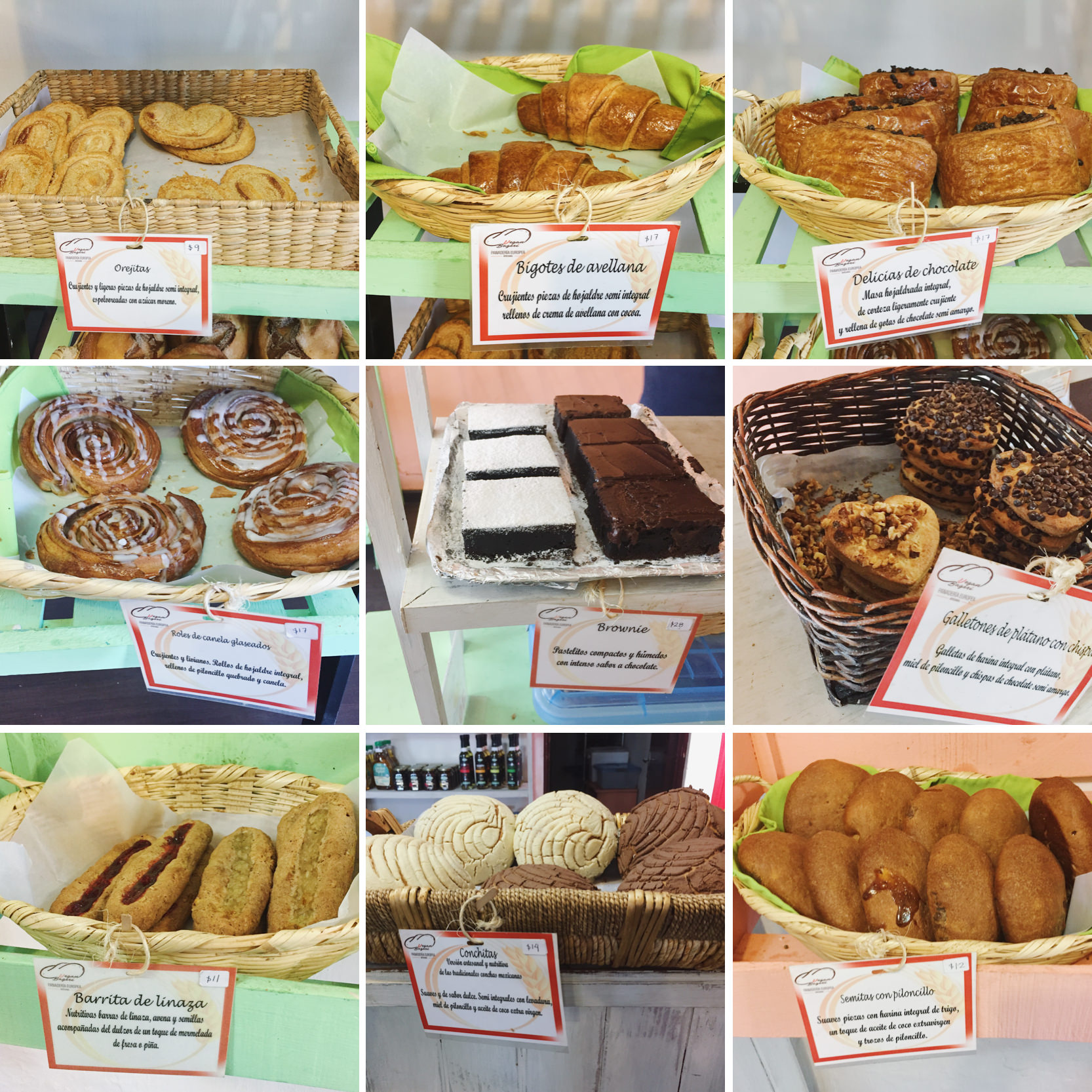 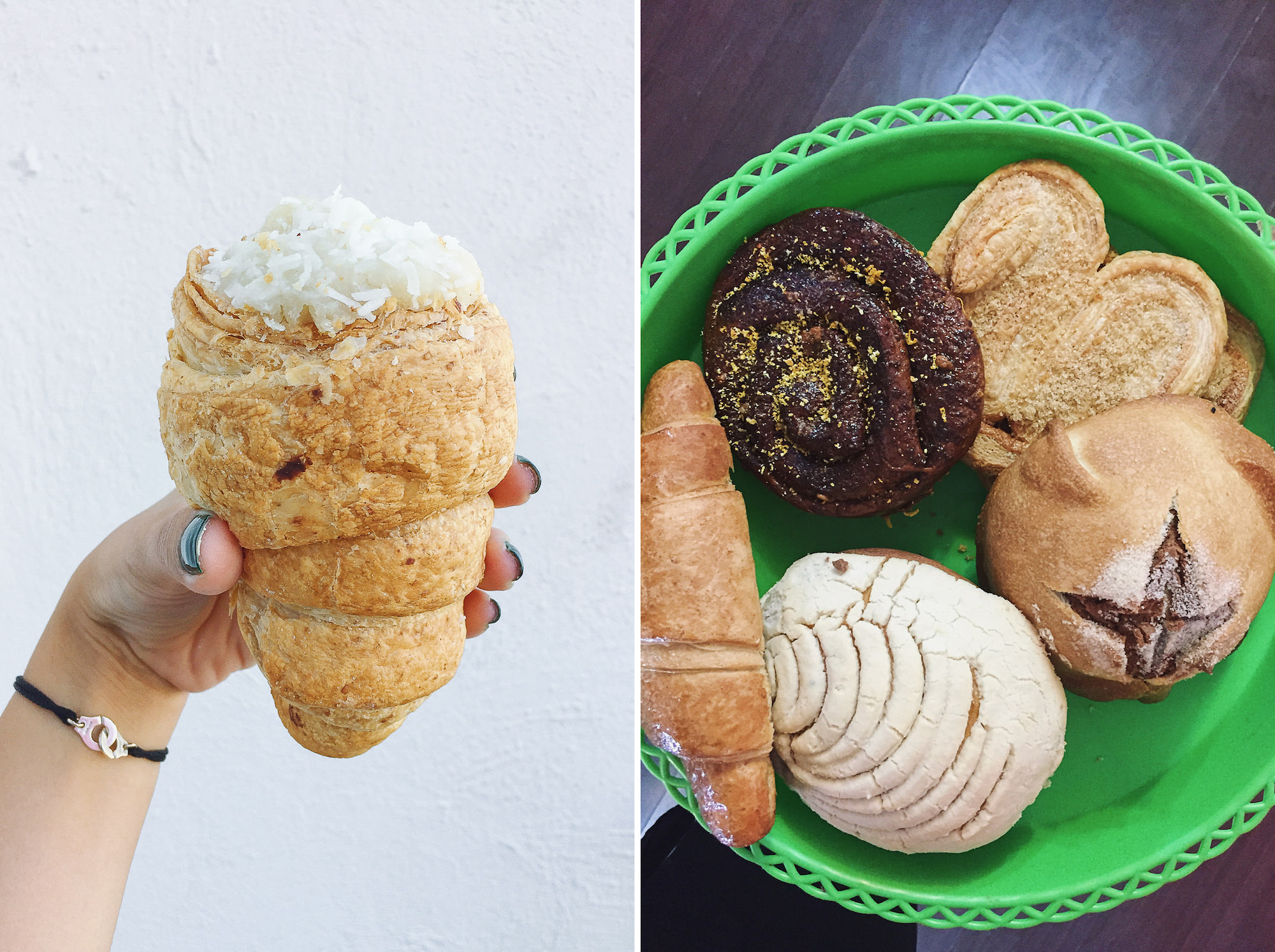 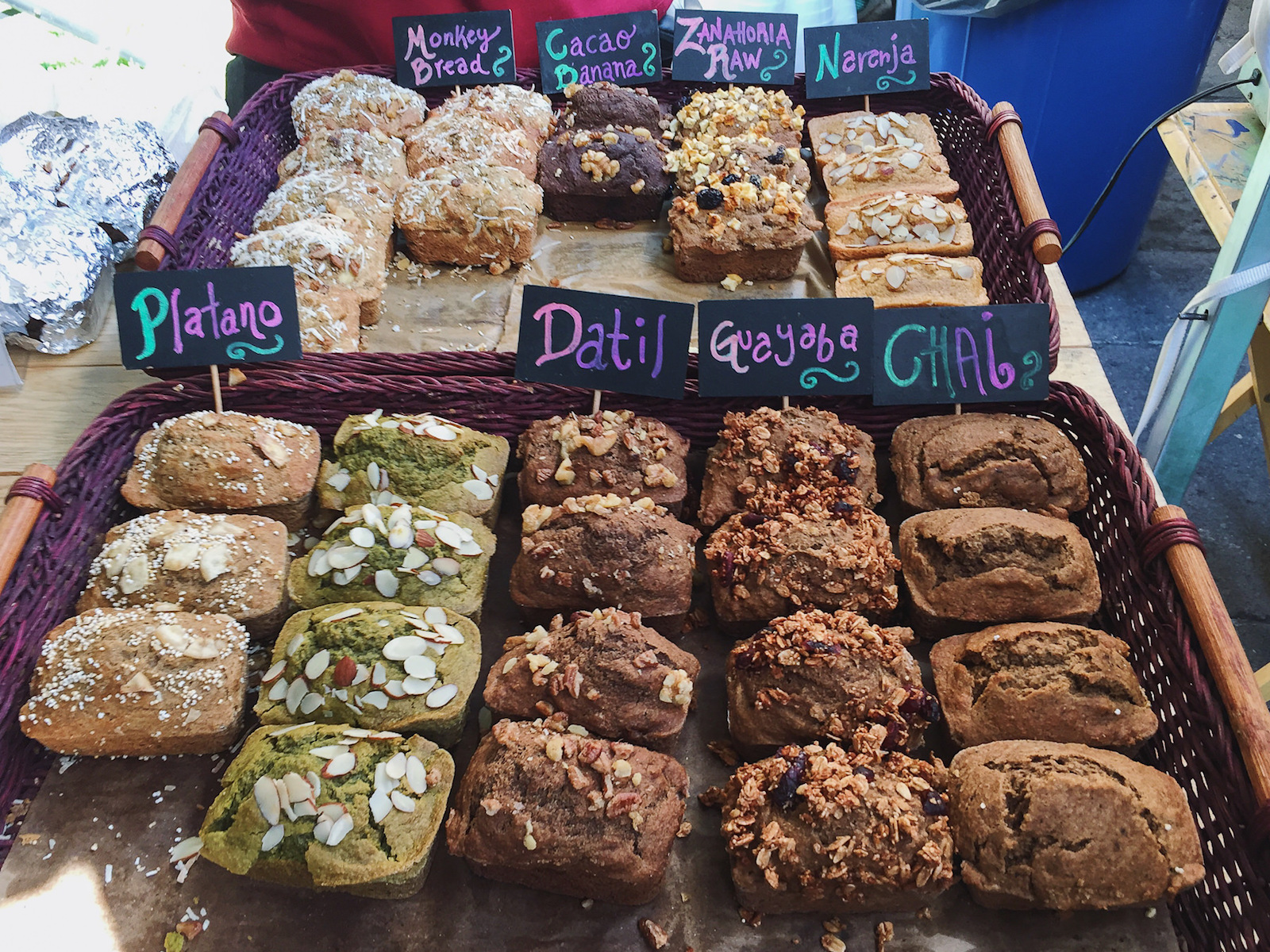 PIAF Reposteria has a location in Zapopan and often sells in popular markets and festivals. Their sweets are vegan, gluten-free and use alternative sugars and sugar substitutes.

PIAF has a brick and mortar location in Zapopan as well their pop-up stalls at various markets throughout Guadalajara. Their bakery is entirely vegan and gluten-free.These alternative desserts are great for anyone looking for vegan sweets with no added sugars or gluten-free options. We tried various flavors of their donuts and especially enjoyed the matcha one. 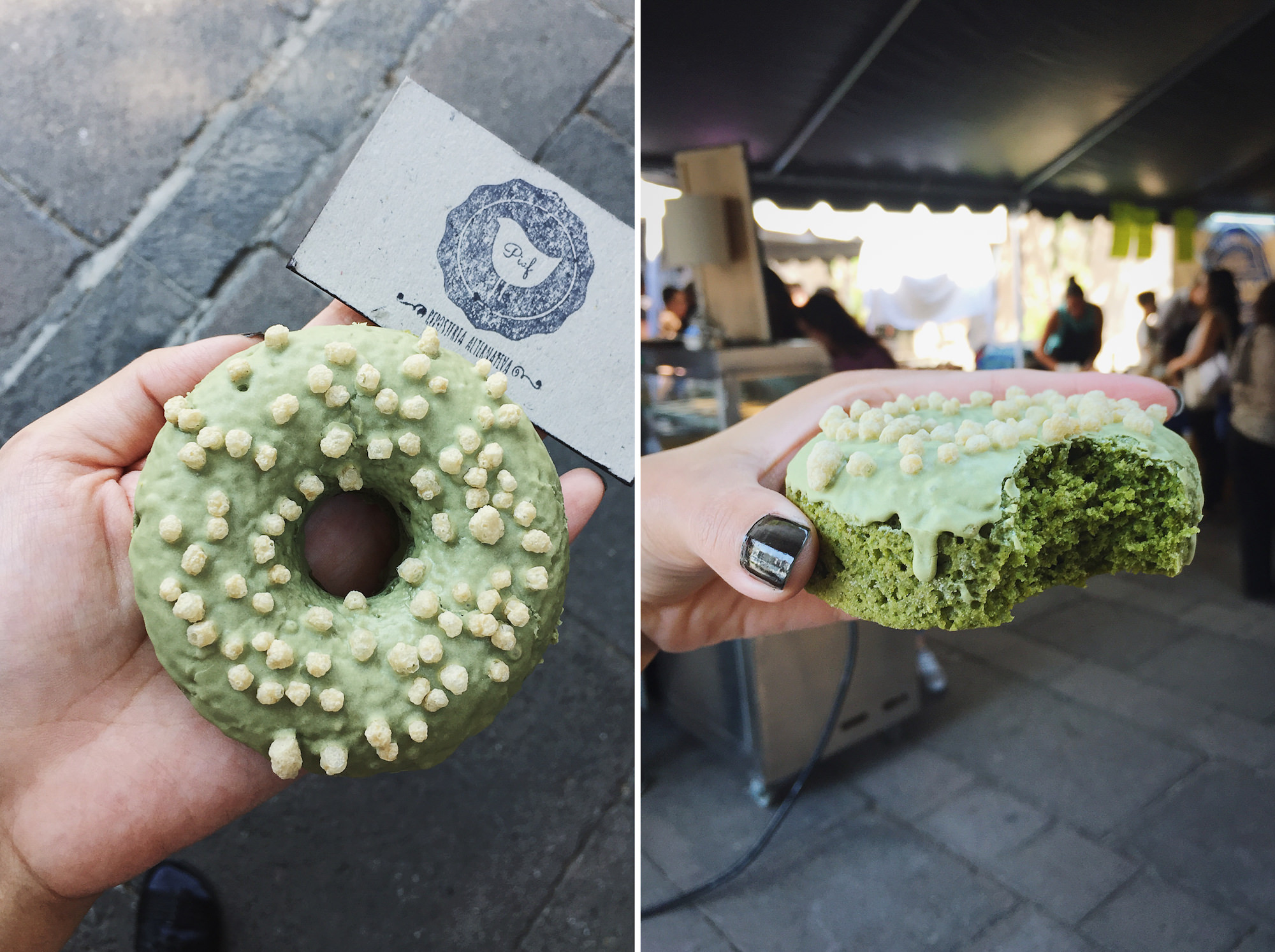 Their Donas Horneadas (baked donuts) are petite but surprisingly rich, Matcha was our favorite. 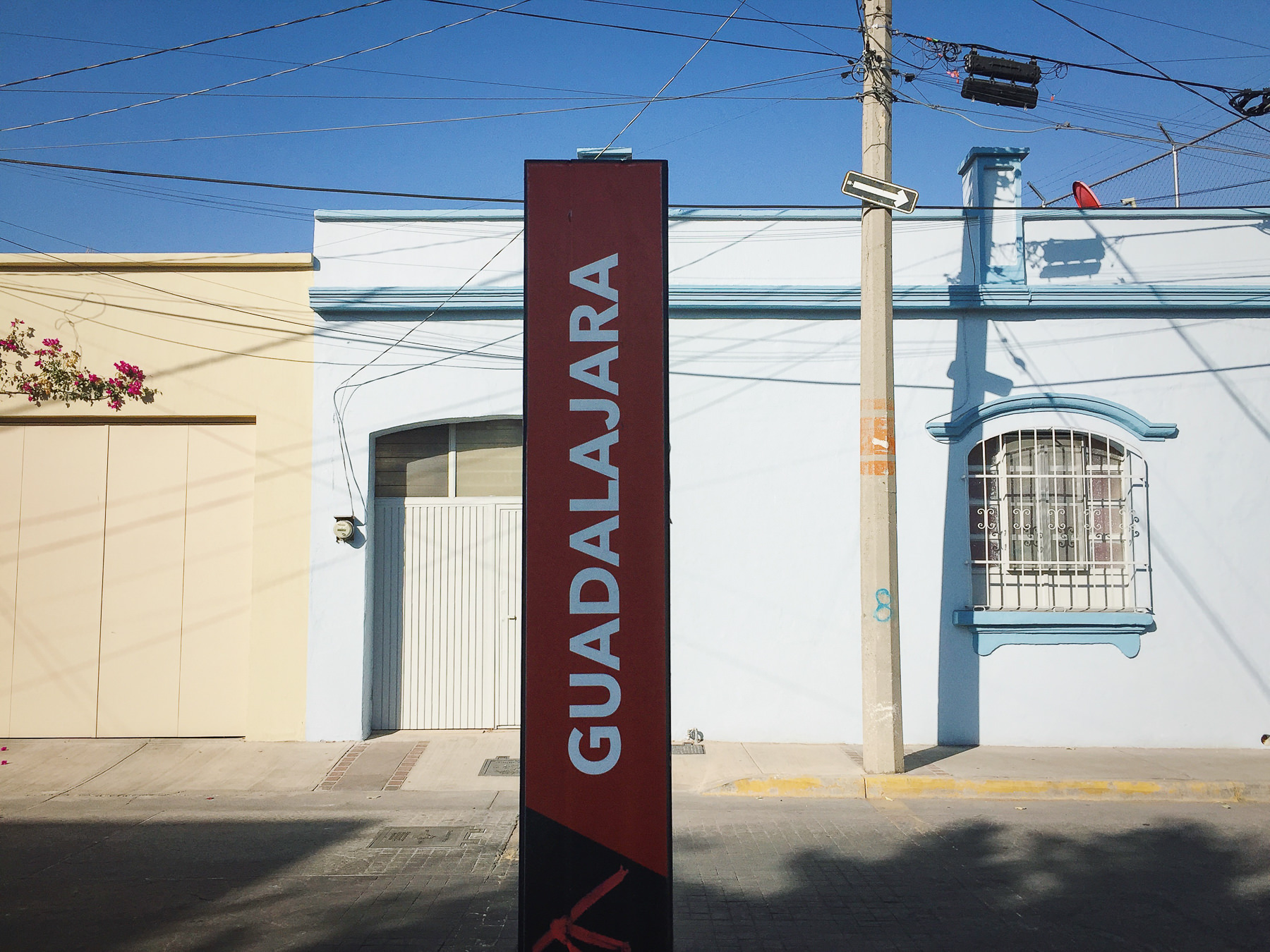 In addition to the vegan eats in Guadalajara that we have featured, there is also a significant number of vegan & vegetarian (lacto-ovo) restaurants scattered throughout the city. We found a few restaurants with vegan-friendly menus and if you are comfortable ordering in Spanish you can find even more options. For accommodation, the most walkable neighborhoods are those surrounding Chapultepec Avenue. The city is easily accessible from the airport via Uber or taxi and while we enjoyed walking in Guadalajara, Uber provides the best option for seeing and sampling the best this city has to offer. On average our Uber rides cost us less than $2(US) per ride and our cars were always clean and our drivers professional.

Have you been to Guadalajara, Mexico and tried any of the restaurants mentioned?

Portland: Back to Eden Bakery Boutique