The “Vegan” Girl & The Goat and Chicago

Continued from a previous post on Chicago: Green Zebra + Arami + Slurping Turtle + Vegan Finds, we had a couple of vegan dishes at Girl & The Goat Restaurant in Chicago’s West Loop area. Opened in summer of 2010, the restaurant is owned by The Top Chef season 4 winner, Chef Stephanie Izard and she was the first woman to win Top Chef.

The restaurant is not 100% vegan, but they have a separate exclusively vegan menu. Here is a photo of the vegan menu I took, view the menu here (taken on February 10, 2013 evening). The menu features small vegan plates of global comfort foods with strong, diverse flavors. The server was knowledgeable and accommodating to vegan options, as well as an exclusively vegan menu to the table. The restaurant gets packed and busy on the weekends, so a reservation is beneficial. We had a fabulous vegan dining experience at Girl & The Goat. 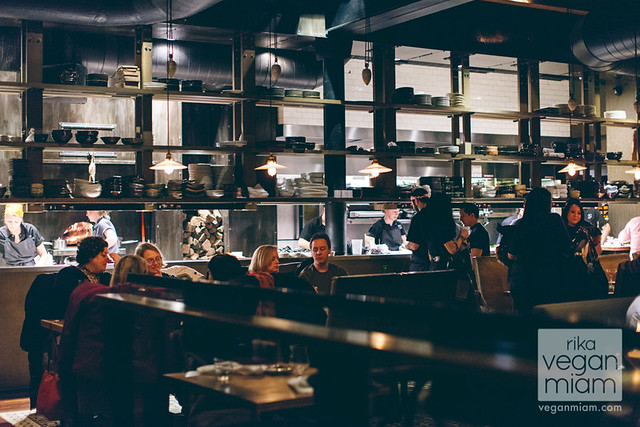 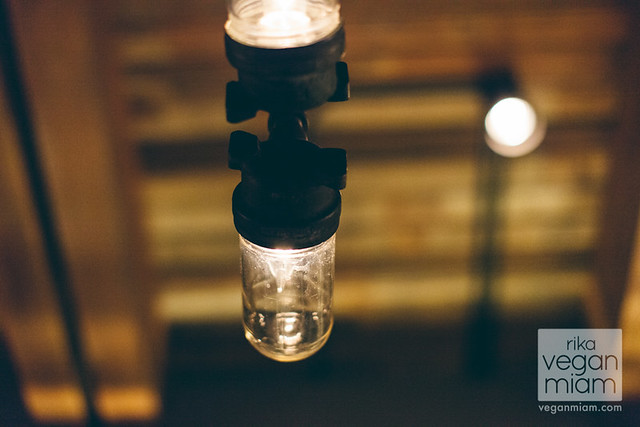 Girl & The Goat: Fascinated with their light bulbs above the bar area. The place was massive with wood beams and high ceilings. It is like a giant warehouse, plus the kitchen was massive, too. 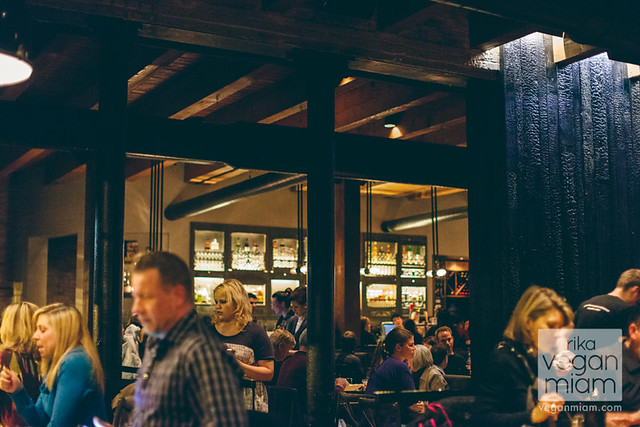 Girl & The Goat: View from our table; the restaurant was packed on a Sunday night! We sat by the windows, which was pretty nice. 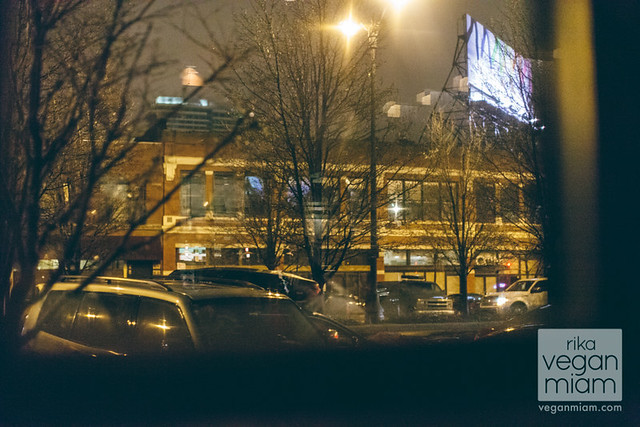 Girl & The Goat: Window view from our table; looked like a typical wintery evening in Chicago. 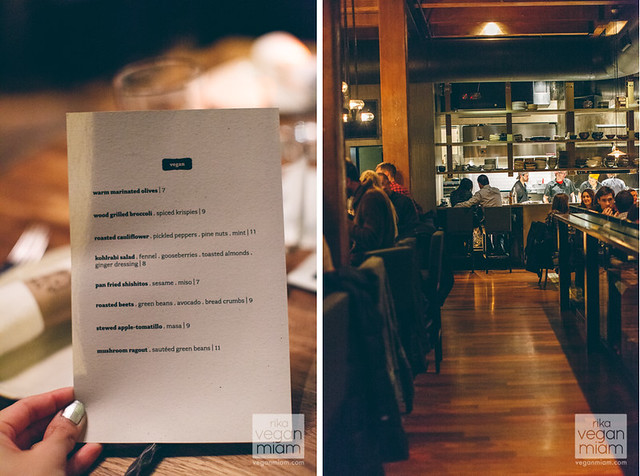 Girl & The Goat: Our exclusively vegan menu and towards the kitchen. The bar is on the left. We checked in a bit early for our reservation and sat at the bar for a bit. 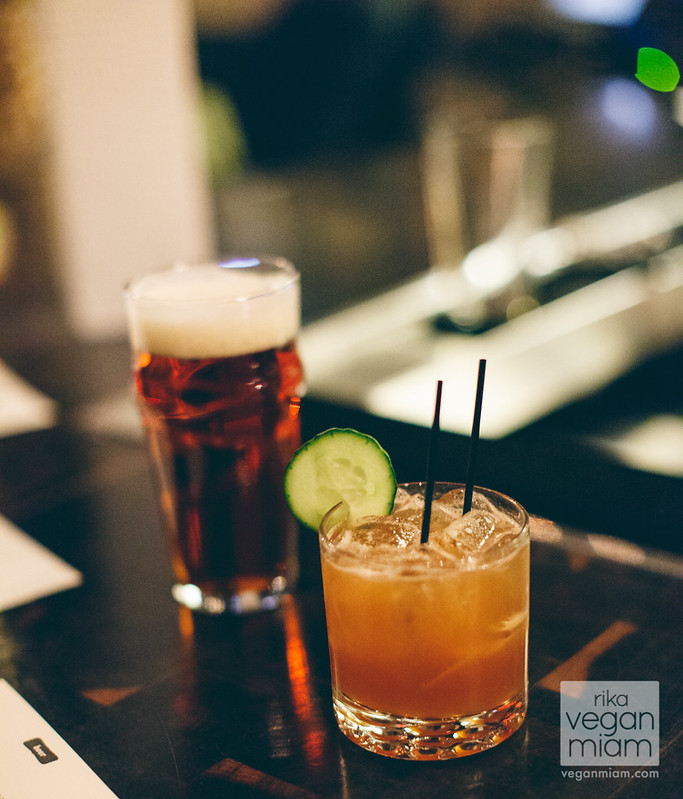 Girl & The Goat: While we waited for our reservation, we had alcoholic beverages. I had a cocktail and Doni had a beer. I don’t remember which cocktail I had since it was taken in February 2013. It could have been a Best of Three cocktail that consists of Russian Standard Vodka, Pimms #1, Cucumber and Lime. And whew, that was a pretty strong cocktail but I still love vodka. 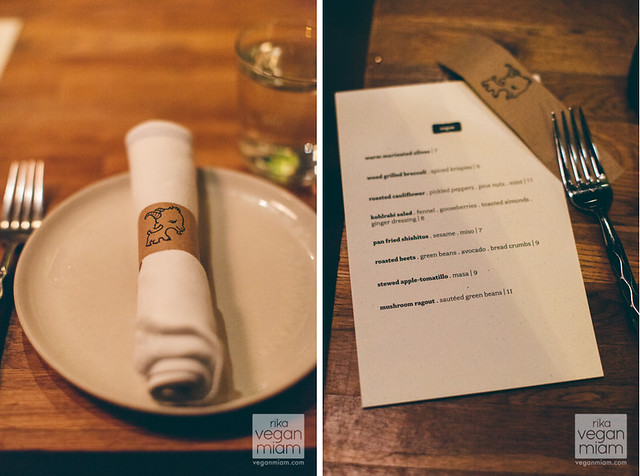 Girl & The Goat: This cute goat is all over their napkins, menus, cutting boards and a snap of the vegan menu on our table. 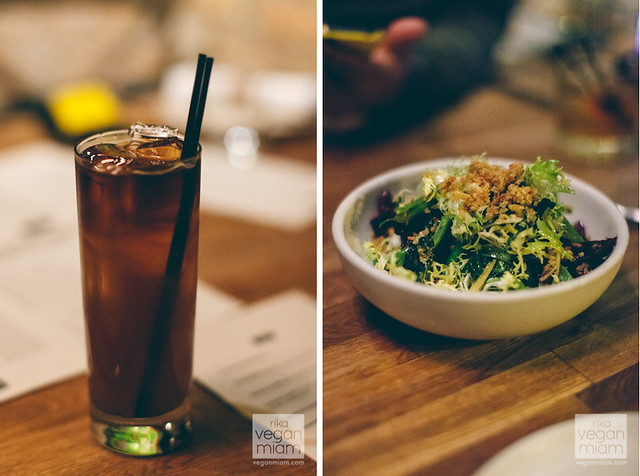 Girl & The Goat: For the beverage, I had a tamarind-based cocktail and I don’t remember what it was called and I don’t think it’s still on the menu anymore. For the salad, we had a vegan Kohlrabi Salad ($8) with fennel, gooseberries, toasted almonds in ginger dressing. The salad was pretty tasty with the ginger dressing and a bunch of crunch from the toasted almonds. I apologize for the grainy photo quality, the restaurant was pretty dark (without flash). 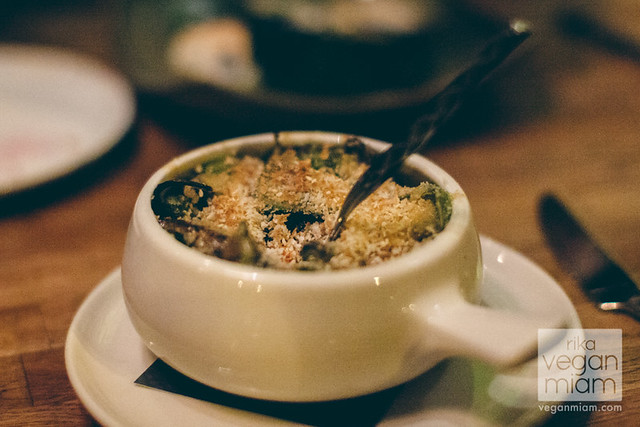 Girl & The Goat: This is a filling dish. The portion is reasonably big for the both of us. We had a vegan Pan-fried Shishitos ($7) with sesame and miso. It was my first time to have pan-fried shishitos and we loved them. 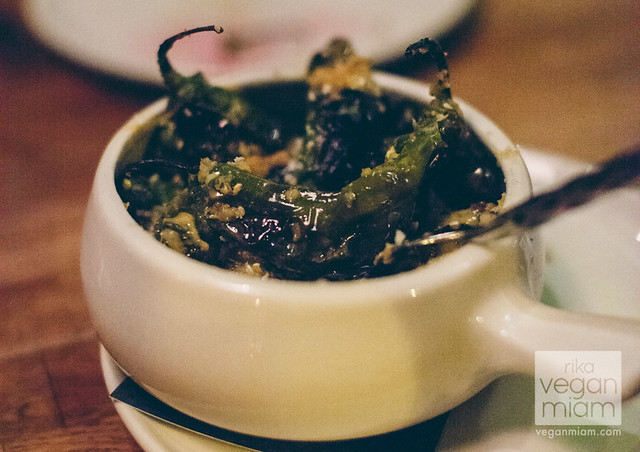 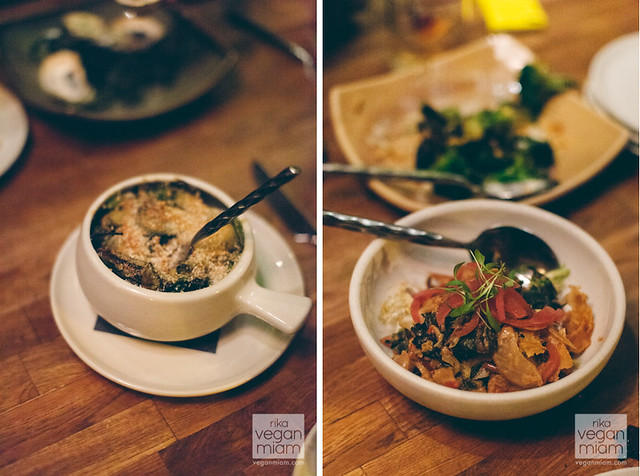 Girl & The Goat: On the left, vegan Pan-fried Shishitos($7) and to the right, we had a vegan Stewed Apple-Tomatillo with Masa ($9), the dish has sweet Latin flavors with crispy thick “chips.” That’s all we’d remembered. 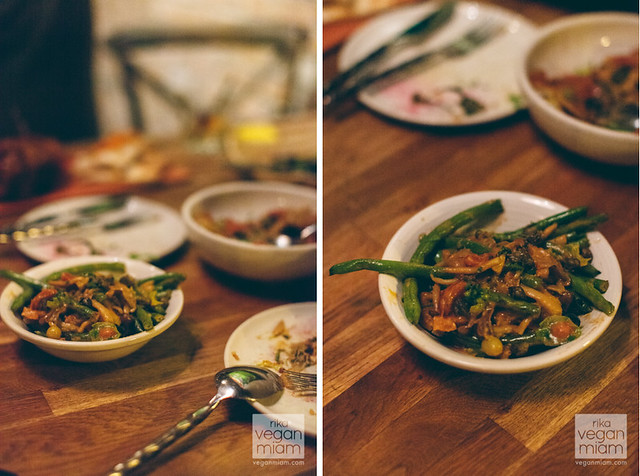 Girl & The Goat: Our last course was a vegan mushroom ragout ($11) with sautéed green beans. The dish was creamy and tasty with the veggies and green beans. We were too full after trying the dishes above and didn’t have room for dessert. 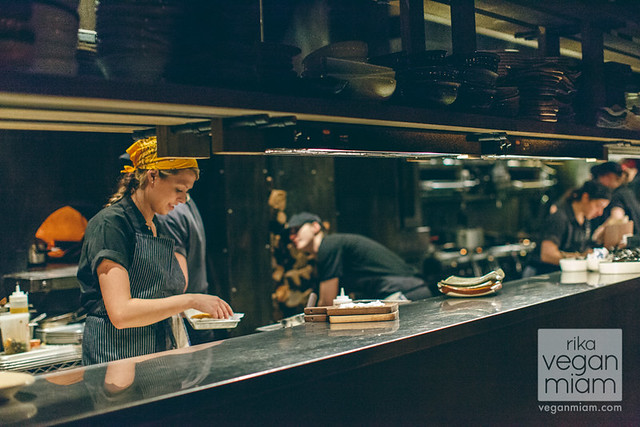 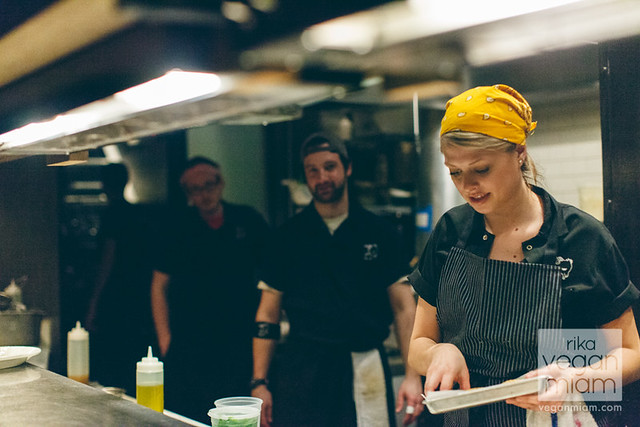 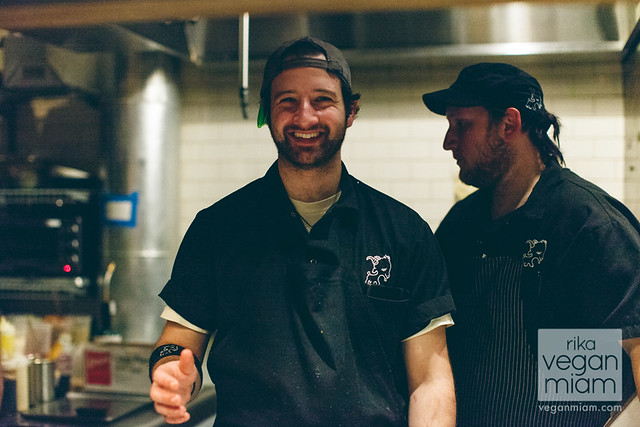 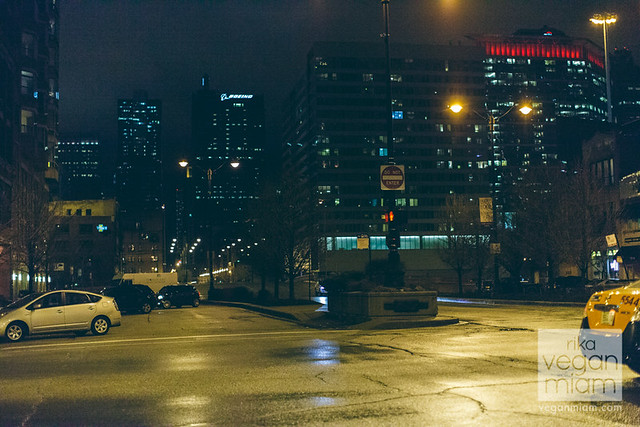 Girl & The Goat: Walked outside of the restaurant, ended up on this lonely street with a full stomach during a wintery evening. It was pretty lovely that night.

the old bar in chicago

After dining at Girl & The Goat, we headed to a nearby bar & diner called, “Au Cheval” off W Randolph St (just across Girl & the Goat). Doni and his dad went for a birthday drink and I was somewhat intrigued by the old-style and retro interiors of the bar and kitchen…and indeed there’s nothing vegan at this bar. The bar makes you feel like sitting in the old Chicago days. 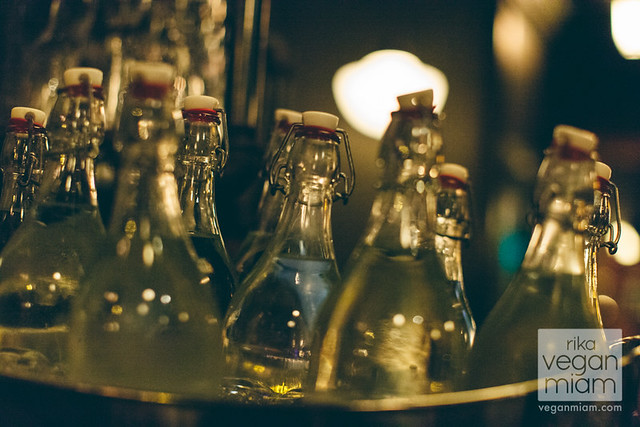 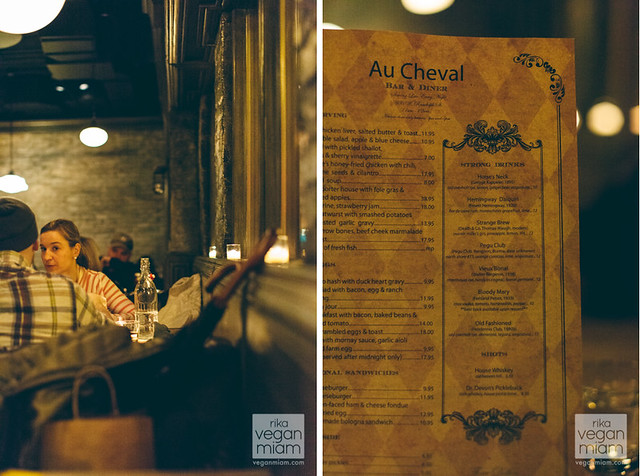 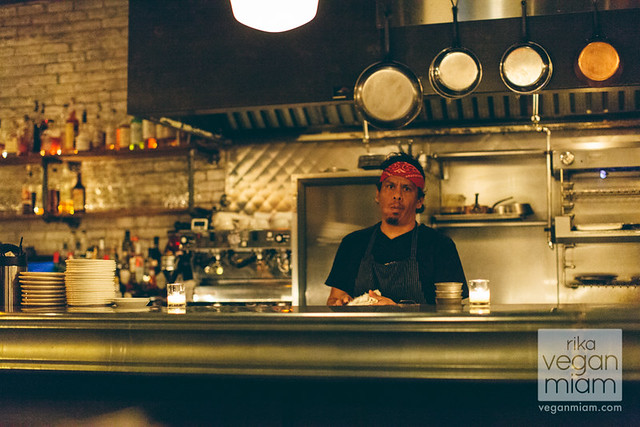 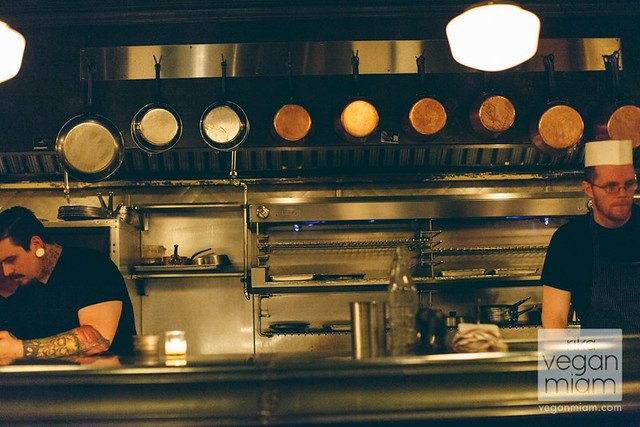 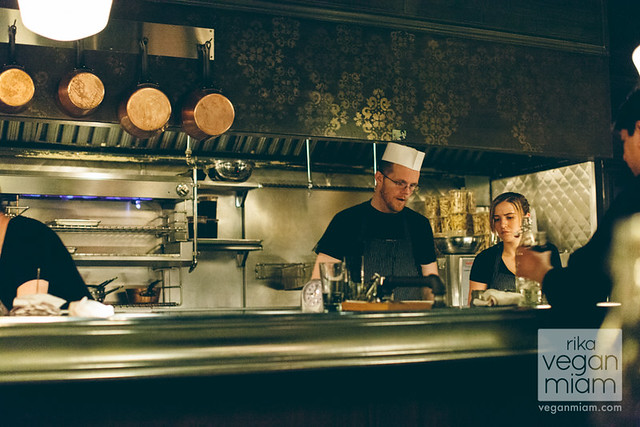 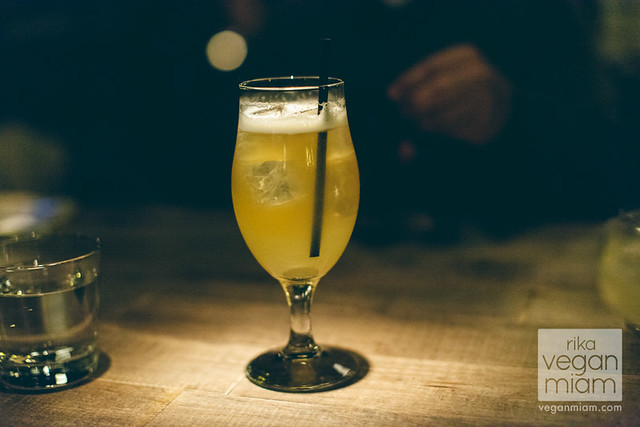 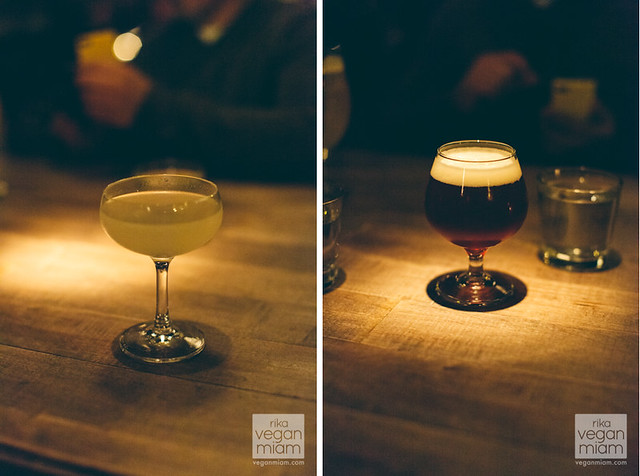 what did we do in chicago 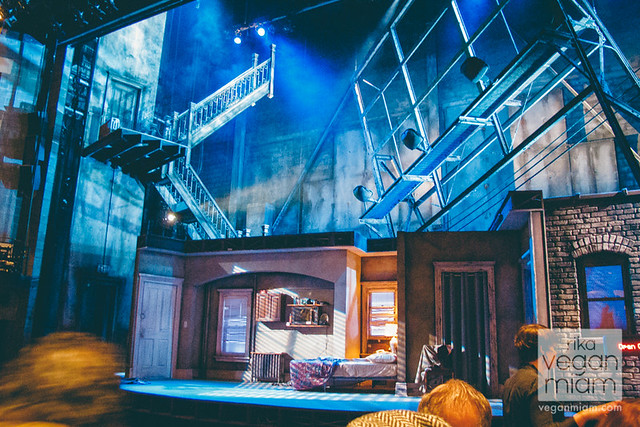 The best part of the trip was seeing The “Motherf**ker With the Hat” play at Steppenwolf Theatre. It is a dark-comedy show based on an ex-con who discovers a man’s hat on his door-side table, assuming that a mysterious fellow was sleeping with his girlfriend. Filled with anger, he seeks advice and counsel in his Alcoholics Anonymous sponsor Ralph D. (played by an American actor Jimmy Smits) and his cousin Julio. And I won’t reveal the ending here.

It was pretty awesome to see the American actor Jimmy Smits in person who is notable for his portrayal of “Miguel Prado” in Dexter. Sadly, photos weren’t allowed at the theater. 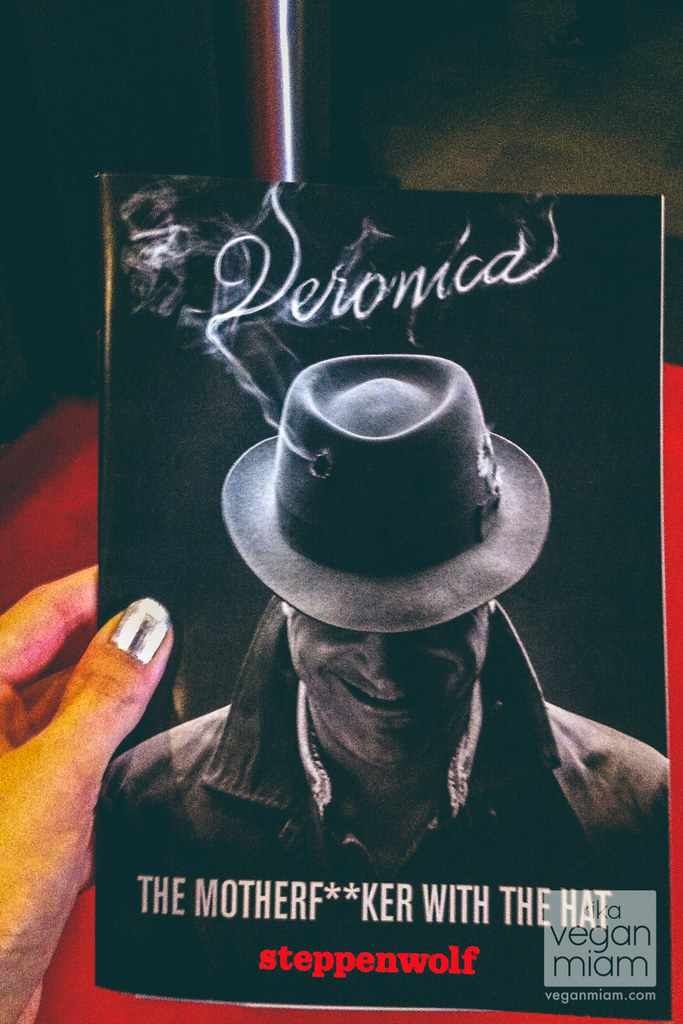 The “Motherf**ker With the Hat” @ Steppenwolf Theatre, Chicago 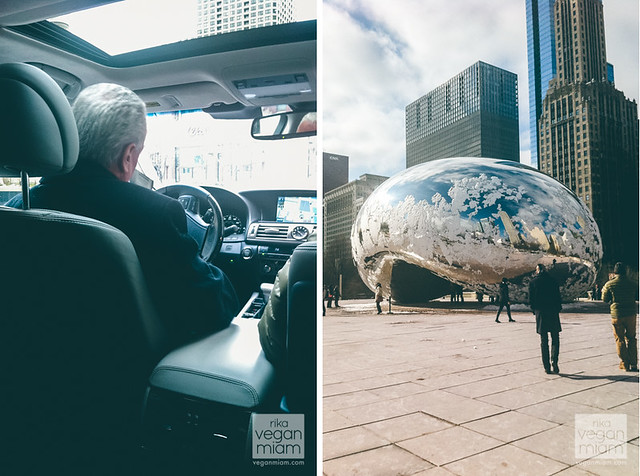 We had a private driver to take us to see the Cloud Gate, a public sculpture which reflect Chicago’s skyline and the clouds above. It was really chilly in February, and there was a bit of snow on the grounds. My feet wasn’t handling the snow very well, I wasn’t prepared for it. 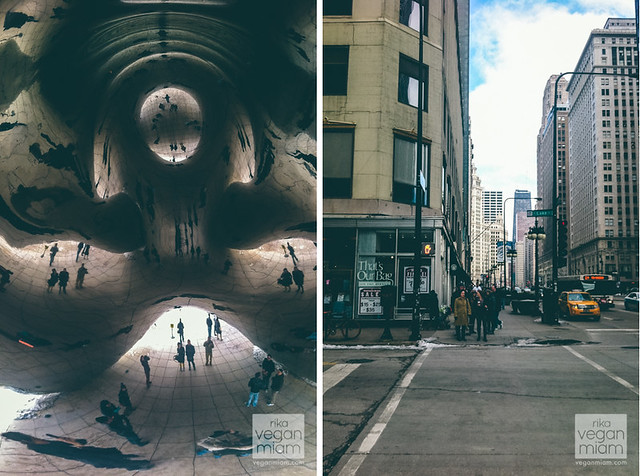 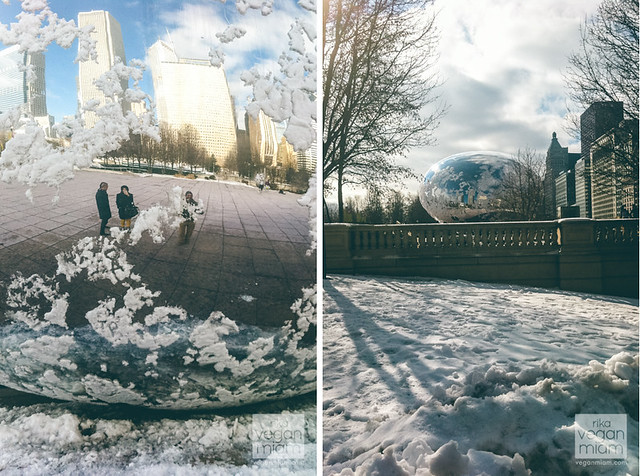 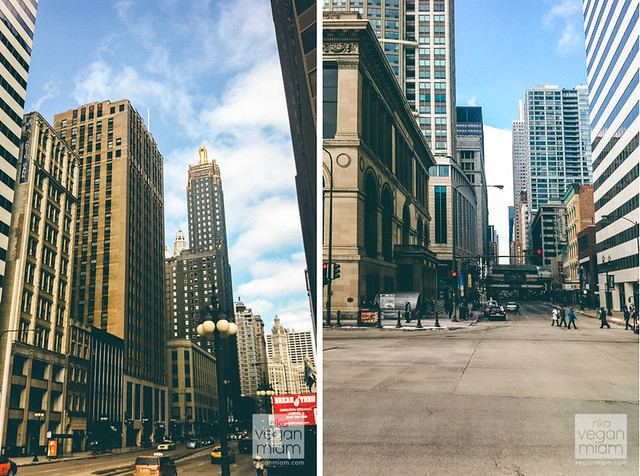 Whew! Stay tuned for the last Chicago post on our stay at The Waldorf Astoria Chicago and their vegan breakfast series! Have a great Sunday!

Have you been to Girl & the Goat, Chicago or Cloud Gate before? Have you tried Japanese shishito peppers before? What’s your favorite play or public sculpture?