Vegan empanadillas in Spain?! Big thanks to my partner Doni. These are also known as empanadas, but are called as empanadillas here in Spain. Empanadas are small pastries that look like “calzones” from Latin America and Spain, that are either baked or deep fried. In Spain, they are traditionally filled with seafood and are as large as an American pie, plus coated with egg white or lard to make them shiny. But the vegan versions do not.

These baked and organic vegan empanadillas are available at this awesome cafe (and with Wi-Fi) at the grocery store, “Herbolario Navarro” and it is not mentioned on Happy Cow Valencia! It is one of the coolest groceries I have been to in Europe. It is massive, modern and clean. There are other fantastic vegan-friendly groceries in Spain, read our review here. The cafe offers a vegetarian menu plus vegan options (they even wrote them in Spanish). Please note, it is not a 100% vegetarian cafe. I will write another post about the grocery & cafe next time with more photos. 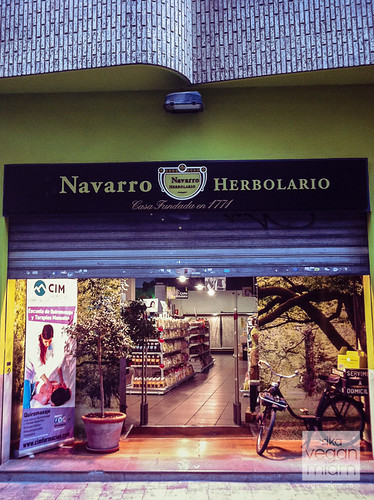 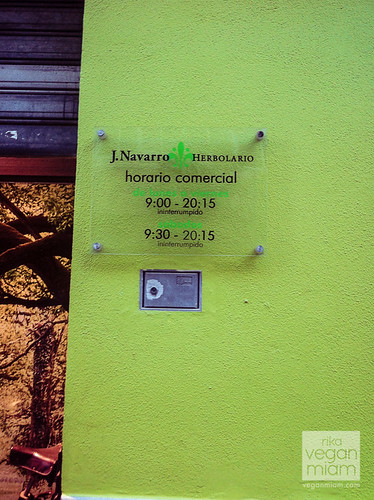 Herbolario Navarro is located in three cities in Spain: Valencia, Mallorca and Castellón. I highly recommend this central location: Calle San Vicente 63 and it’s bigger than the other central locations and it only has a cafe.

Most of the empanadillas are vegan and fillings may change daily. Be sure to ask the staff to check if they are “vegano” (vegan) all the time. All the empanadillas are made with spelt flour (as of 09/16/2013, not wheat, just contacted the whole department) and baked. These are healthier than the original ones you see in Spain. 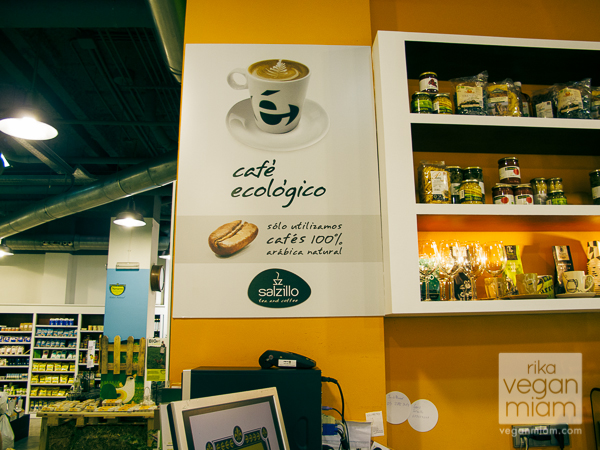 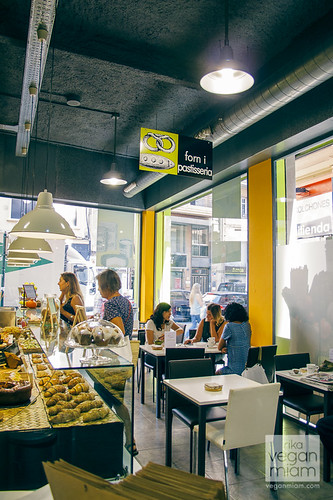 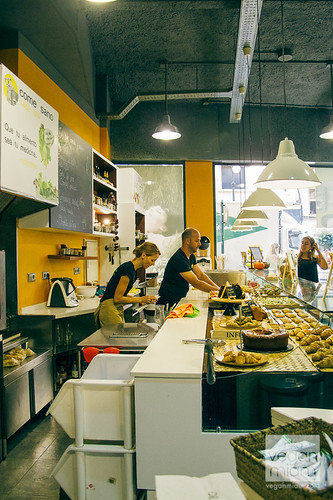 Herbolario Navarro: Interior of the cafe, also have Wi-Fi 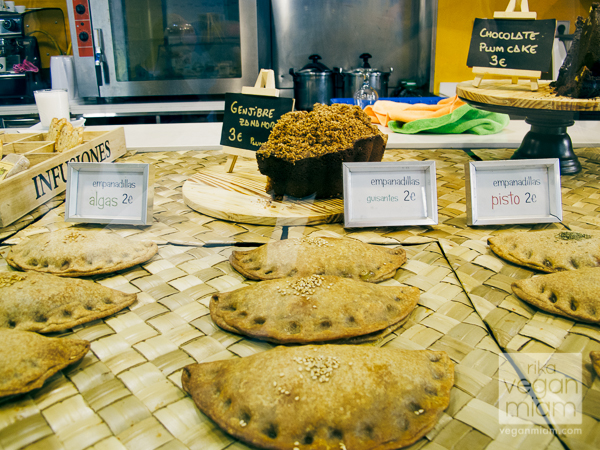 Herbolario Navarro: All the empanadillas are vegan that day with different fillings. Each empandailla costs €2. The first one is Algas (seaweed or algae), the middle one is Guisantes (green peas) and the last one photographed is Pisto (Spanish Ratatouille or Grilled Vegetables + Tomatoes).

Herbolario Navarro: Vegan Tofu Empanadillas (Smoked flavor) These don’t have any toppings while the other had dried herbs and sesame seeds on them. All the empandillas are made with spelt flour and baked. 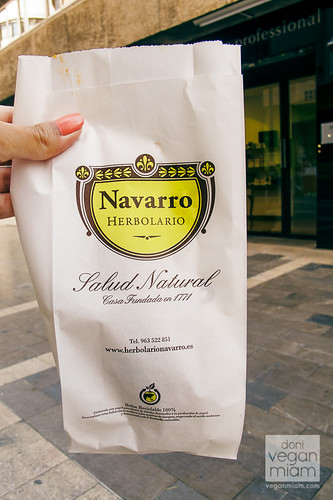 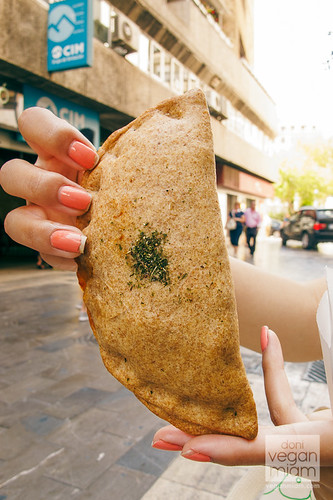 Herbolario Navarro: We got the €2 Pisto Empanadilla. The filling is a Spanish ratatouille (or grilled vegetables & tomatoes). It was mildly greasy on the bottom, but the front, not so much, overall it is easy to eat, without falling apart.

Sorry for the ugly nails (I was wearing LVX Deco color and wore them for a week)…I didn’t have time to paint them. It’s so hard to look after your nails during travels. 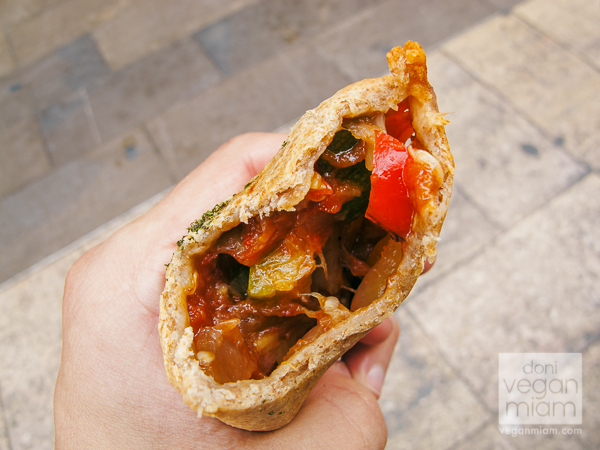 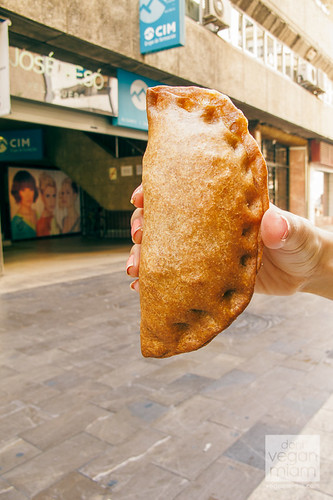 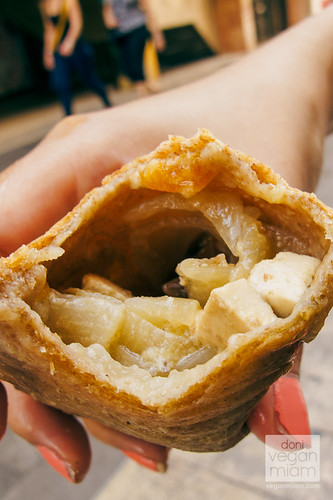 Herbolario Navarro: €2 Tofu Empanadilla – Has a smoky tofu flavor with onions and carrots. This is our favorite flavor. Hearty and delicious. 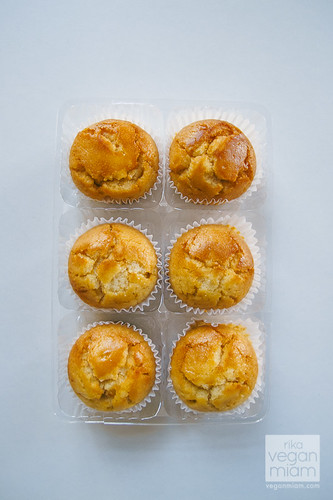 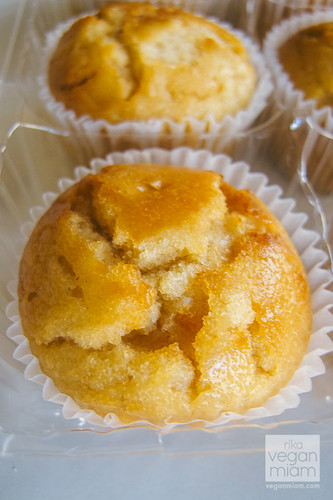 Also at the Herbolario Navarro, we tried the vegan magdalenas (little sweet Spanish lemon cakes) from the previous post. They are pretty good and not too sweet or sour. They are not as fluffy as the non-vegan ones, but still light and a bit dense in the middle.

question of the day: have you ever had empanadas -if yes- what are your favorite fillings or where have you tried them?